KEARNEY – State Sen. Anna Wishart of Lincoln will discuss the future of medical marijuana in Nebraska during the University of Nebraska at Kearney’s Warner Lecture Series.

Wishart will present “Legalizing Medicinal Marijuana in Nebraska: Policy and Political Implications” on Thursday (Sept. 5) in UNK’s Fine Arts Recital Hall. The event, scheduled for 3-4 p.m., is free and open to the public. A reception will follow the presentation.

“Both Sen. Charles Warner and his son Sen. Jerome Warner appreciated discussion and debate of important issues,” said Peter Longo, a political science professor at UNK. “I’m confident Sen. Wishart’s talk will be of interest to Nebraskans, whether they support or oppose medicinal cannabis. Her lecture will demonstrate the complex considerations associated with public policies.”

Wishart introduced a bill (LB110) during this year’s legislative session that would have legalized certain forms of medical marijuana, but the measure failed to gain enough support within the Unicameral and it was opposed by Gov. Pete Ricketts. She also co-chairs a group, Nebraskans for Sensible Marijuana Laws, that is gathering signatures through a petition drive in an attempt to put the issue on the 2020 general election ballot.

“I hope attendees appreciate the importance of civil discussion,” he said. “Nebraskans have a tradition of respectfully discussing politics. We may not always agree, but our disagreements can be civil and productive.”

Wishart will be introduced by former state Sen. DiAnna Schimek. The 34-year-old Lincoln native is in her first term in the Nebraska Legislature.

“Her commitment to serve the public will perhaps provide inspiration for our students to be active citizens,” Longo said. 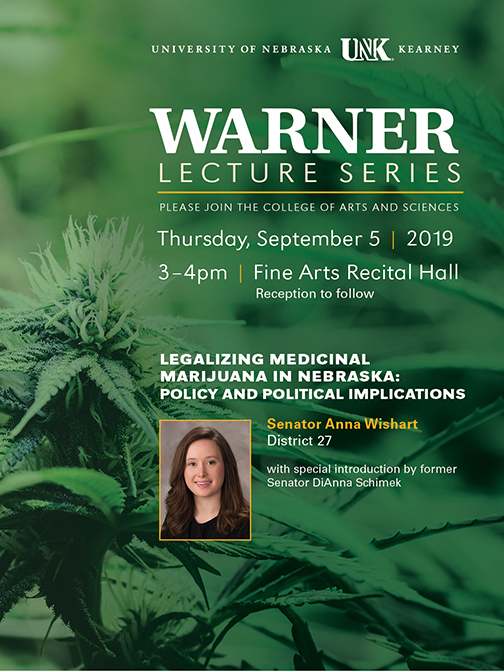