“The Shriners played a huge role in my life and my ability to function as a child and adult. I will always be forever grateful.” – Jan Moore

It’s been 45 years since she was under the care of the Shriners Hospitals for Children, but to her the title is a lifelong badge representing the sense of optimism families receive from the nonprofit organization.

“It’s important that people know the children they’re supporting, they grow up and become people just like me,” Moore said.

The 61-year-old has accomplished a lot over the past four decades – earning a doctorate degree, studying as a Fulbright scholar in Canada and becoming a wife and mother – but her life basically began in a Shriners Hospital.

“The Shriners were a constant presence in my childhood,” said Moore, a professor in the University of Nebraska at Kearney’s Department of Communication Disorders. “I have no childhood memory that doesn’t include them.”

Moore was born with proximal femoral focal deficiency, a rare congenital disorder that affects about 1 in every 200,000 children. The birth defect causes the upper femur bone and hip joint to be malformed or missing.

In Moore’s case, this meant her right leg was shorter than the other and she experienced immense pain during movement.

“Every time my mother changed my diaper she said I would just scream,” said Moore, the youngest of four siblings in a military family.

Moore had her first surgery at Brooke Army Medical Center, which is part of Fort Sam Houston in Texas. Then her parents consulted pediatric orthopedic specialists at the Shriners Hospitals for Children in Shreveport, Louisiana, where she was admitted at around 20 months old.

“Essentially, I was casted up and braced up for several years. I was baptized in a cast,” said Moore, who spent most of her first three years either propped up in a high chair or crawling commando-style on the floor.

Moore underwent another series of surgeries at age 4, when part of her pelvis was removed and grafted to her femur to create a hip joint. Additional hip procedures were needed at age 9, this time at the Shriners Hospital in Honolulu while her father was stationed at Fort Shafter.

“As I grew, they had to go in and revise my joint,” said Moore, whose right leg was 3 inches shorter than her left.

Each surgery was followed by a monthslong hospital stay and intensive physical therapy. Yet, Moore, who was fitted with a cast extending from her armpits to her feet, describes the experience fondly.

“We had quite a normal existence,” she said. “There was a consistent level of care they provided that gave you stability.”

Children at the Shriners Hospital in Hawaii attended school and church there, participated in arts and crafts and other activities and remained connected to organizations such as the Girl Scouts.

Moore had her final surgery at a Shriners Hospital in 1969 to remove the growth plate from her left knee, allowing her right leg to continue growing and “catch up” during puberty. Her legs are now within about 1 inch of each other.

“The Shriners provided me with really great care … and hope,” said Moore, whose family returned to her native Arkansas after her father served in the Vietnam War.

She was discharged from the Shriners Hospital system in 1974, at age 16, then embarked on an adventurous life.

Moore worked as a summer park ranger at Grand Teton National Park, where she gave mountain climbing a try, and learned to downhill ski when she moved to Calgary, Alberta, Canada, after earning her master’s degree.

That upgraded hip she got in 1967 held up until about 3 1/2 years ago, when she underwent replacement surgery at the University of Nebraska Medical Center.

“I finally got titanium parts,” Moore said with a smile. 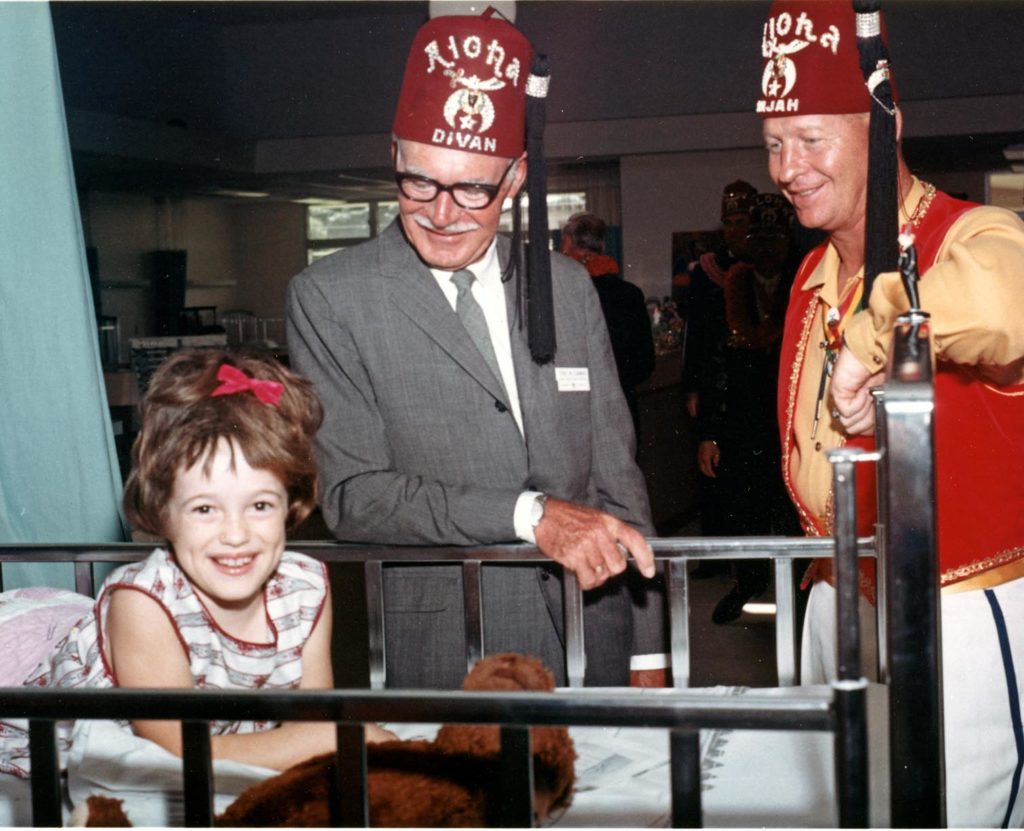 Although she still walks with a noticeable limp and must manage some pain, the difficulties Moore has endured ultimately led her to a career helping others.

At UNK, where she’s been a faculty member for 11 years, Moore researches speech and language in developing children and children with hearing loss. UNK’s RiteCare Clinic, housed within the department of communication disorders, provides speech therapy services for Nebraska children. Those services are offered at no cost to qualifying families thanks to contributions from the Scottish Rite Foundation and donors.

The Shriners Hospitals for Children system – 22 nonprofit hospitals across North America – also provides its specialized care at no cost to families.

“The worry is not on the expense, the worry is on the healing,” Moore said. “That’s the gift they give.”

Moore will be sharing that message, and her story, with anyone willing to listen during this weekend’s Shrine Bowl festivities in Kearney.

She wants people to know how this “Shriners kid” turned out.

“The Shriners played a huge role in my life and my ability to function as a child and adult,” she said. “I will always be forever grateful.”

Tickets are $14 for adults, $8 for students and free for children younger than 2. Proceeds support the Shriners Hospitals for Children.