KEARNEY – The findings in a recently released study highlighting the University of Nebraska’s economic impact come as no surprise to Derek Rusher.

As president and CEO of the Kearney Area Chamber of Commerce, he’s well aware of the university’s contributions to the community and its importance to the region.

“The University of Nebraska at Kearney is an invaluable and essential component of the Kearney economy,” Rusher said. “With over 7,000 students and staff, UNK continues to have a positive impact on the sustained growth in Kearney. UNK seems to be one of Kearney’s competitive advantages.”

The study conducted by Tripp Umbach, a leading national consultant with expertise in economic impact studies, supports that statement.

According to the analysis, UNK has a $265 million annual economic impact on the state, supporting nearly 2,500 jobs and generating $9 million in tax revenue.

In Legislative District 37, which includes Kearney, Gibbon and Shelton in Buffalo County, the University of Nebraska’s economic impact is $144 million each year, with more than 1,200 jobs supported.

Those figures are even more substantial when the impact of recent NU graduates is factored in.

The assessment shows a graduating class adds more than 400 employees to the District 37 workforce – the highest number among the state’s 49 legislative districts. These graduates generate an additional $128.1 million in annual economic activity and support 1,100 jobs. Both of those figures are also the highest in the state, as is the $4.68 million in tax revenue they generate each year.

More than 70% of NU graduates remain in Nebraska to work. In Kearney, approximately 1 in 8 residents has a degree from UNK.

The university’s educational, research and outreach activities extend well beyond the Kearney city limits, as well.

Tripp Umbach’s analysis puts NU’s economic impact at $616.5 million across central and western Nebraska – an area that includes 50 counties. Another $343 million is contributed each year by the latest class of NU graduates.

“The city of Kearney plays an important role in the economic development and growth of central Nebraska,” Kearney Mayor Stan Clouse said. “Having UNK and its resources in our city is one of the things that sets us apart from other communities our size. Faculty, staff and students drive our local economy.”

“The value of UNK cannot be overstated,” Clouse added.

The University of Nebraska system grows the state’s economy by $4.5 billion each year, according to the study, generating $7 for every $1 the state invests.

NU also sustains a highly skilled workforce for the state, supporting 1 of every 26 jobs in Nebraska, according to the report. The nearly 40,000 Nebraska jobs supported by the university include not just NU employees, but those who have jobs as a result of university activities.

About 1 of every 7 working-age Nebraskans holds an NU degree, and 11,000 new NU graduates enter the workforce every year. The earnings and spending activities of each graduating class add $2.4 billion to the state’s economy annually, above and beyond NU’s baseline $4.5 billion impact, the assessment shows. 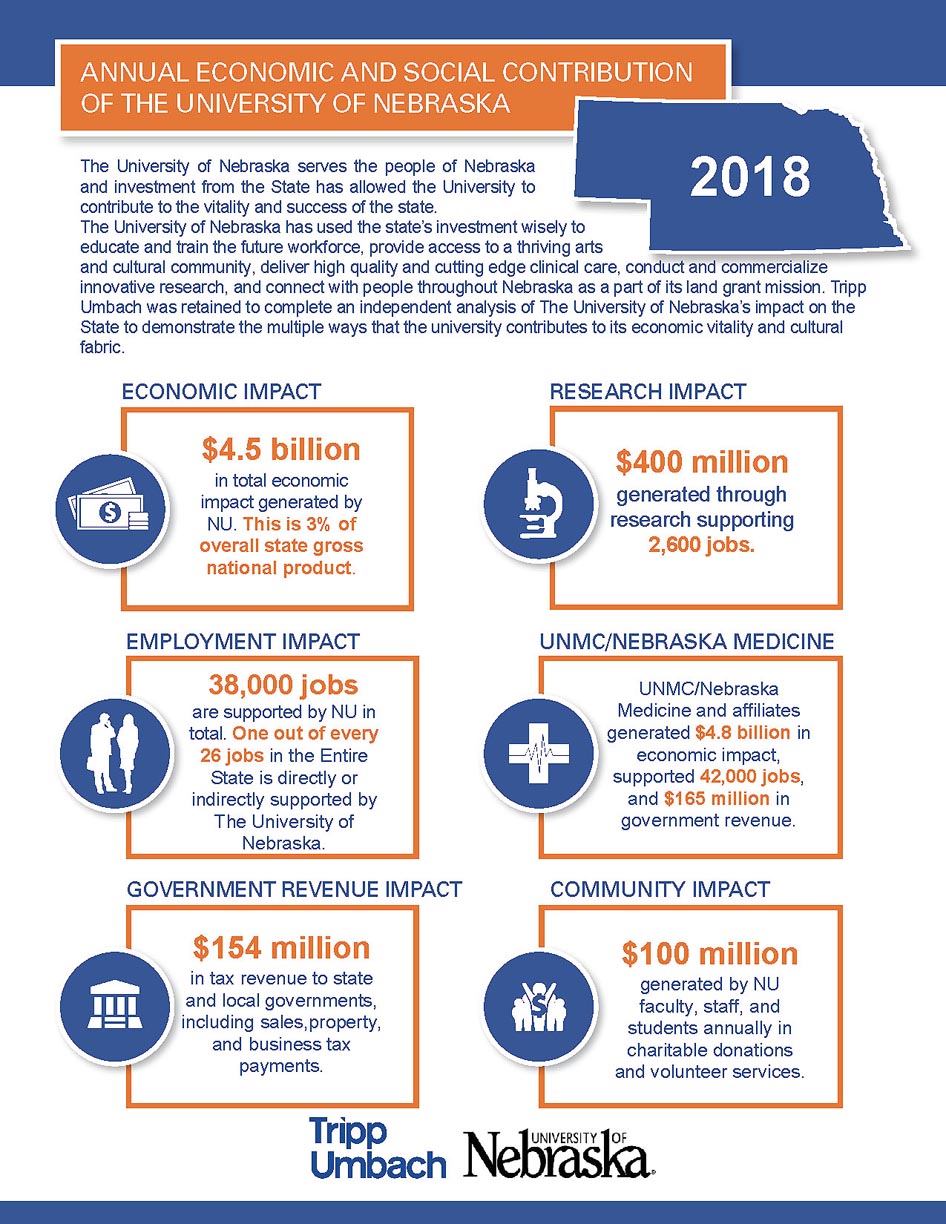