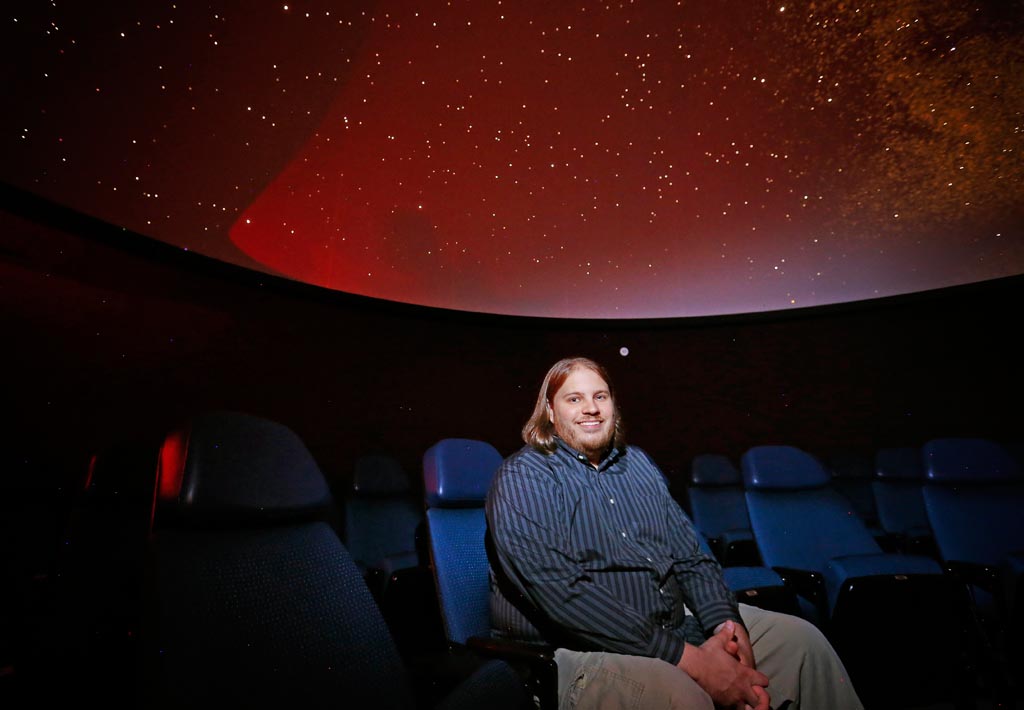 When 8-year-old Adam Jensen pointed his first telescope to the sky in the early 1990s, scientists already knew there had to be planets beyond Earth’s solar system.

They just couldn’t prove it.

It was a dilemma Jensen could have sympathized with. Whether seeing dinosaurs come to life in the movies, turning the pages of chemistry and astronomy books at the library, or searching for deep-sky objects in his backyard, Jensen’s scientific interests were fueled early by a desire to “see the stuff that otherwise you can only imagine.”

Today, according to the National Aeronautics and Space Administration, more than 1,000 exoplanets have been confirmed. Scientists are now searching those planets for something else they’ve long imagined must be out there – signs of life.

Scientists such as Dr. Adam Jensen.

An assistant professor at the University of Nebraska at Kearney, Jensen’s work with exoplanetary atmospheres has earned him a spot on NASA’s Nexus for Exoplanet System Science. NASA hopes the interdisciplinary group will lead to better understanding of exoplanetary systems, and will develop techniques to search for life beyond Earth.

“We want to understand these exoplanets better,” Jensen said, explaining that so far astronomers have studied bigger planets, called “hot Jupiters,” because they’re the easiest to observe with current technology. He and other scientists, though, have much larger goals.

“As we improve these techniques, as technology improves, then we’ll be able to observe smaller and smaller planets in this way and start looking at the planets that are more like earth’s size, and we want to understand those as well, and then obviously some of the discussion at least goes toward questions of are these planets habitable.”

The NExSS appointment came after Jensen was awarded a 5,443 research grant from NASA’s Exoplanet Research Program last fall. He has published numerous analyses of exoplanetary atmospheres and the material found between stars, called the interstellar medium. 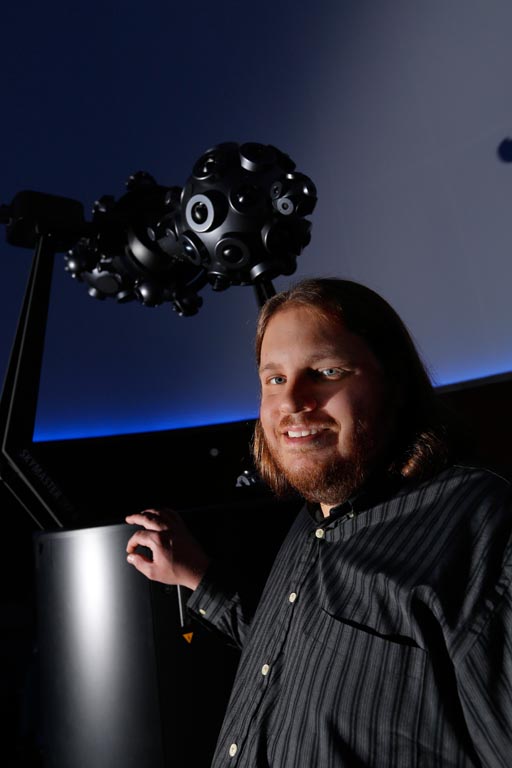 At UNK, Jensen is part of the faculty for Nebraska’s only astronomy major.

While he’s been awarded time on some of the world’s largest telescopes, Jensen works with the data, rather than with the equipment. His work starts when an astronomical target (a planet, gas cloud or other object) passes in front of a star and is backlit. Ground-based or satellite telescopes then take photographs and readings of the light passing through the target.

That data usually reaches Jensen as a plot, showing how bright or dim the targeted object is at each wavelength on a light spectrum. An absorption spectroscopist, he analyzes that data to measure how much light is absorbed at what wavelengths.

Using a specialized program, Jensen then “fits” the data to theoretical calculations. He explained this step as finding the data’s absorption pattern, which ultimately tells him about the materials that make up the object. For example, if he sees dimming at a wavelength he knows is absorbed by oxygen, then he not only knows oxygen molecules are present, he can measure how much oxygen there might be.

Jensen began his career analyzing the interstellar medium, (gas clouds and other material between stars), partly because of the data he had a chance to work with while in graduate school at the University of Colorado-Boulder. That school was heavily involved with the Far Ultraviolet Spectroscopic Explorer, a satellite telescope launched in 1999.

“It had greater sensitivity than some of the previous satellites, so we were able to look at some slightly dimmer targets,” Jensen said. He and others looked for gas clouds where the molecules were starting to transition into dust, using ultraviolet light rather than the infrared spectrum that’s typically used to observe dusty, “darker” gas clouds.

While the team didn’t see the transitions they’d hoped for, Jensen published articles in the Astrophysical Journal based on the research, analyzing the molecular hydrogen, magnesium and gas-phase iron they did find. He said the significance of that research was mostly that it laid the groundwork for further analysis using ultraviolet light, with a new instrument put on the Hubble Telescope several years ago.

“The reason that any astronomer would want to understand what’s going on in the interstellar medium is that everybody’s looking through it. So whatever you want to see, you are literally looking through a bit of a haze. There is gas and dust out there between us and other stars, and us and other galaxies. So if you want to really understand those other stars and galaxies, then you should have some idea what it is your observations might be filtering through,” he said. 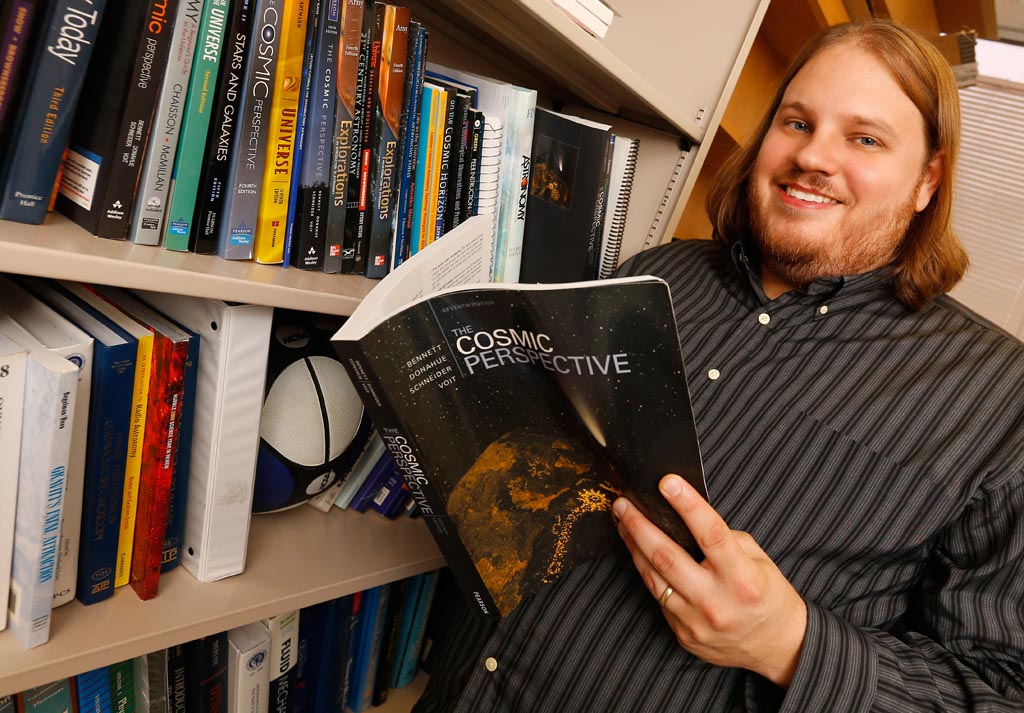 The switch in Jensen’s research emphasis, from the interstellar medium to exoplanetary atmospheres, came after his postdoctoral fellowship at NASA’s Goddard Space Flight Center, while at Wesleyan University in Connecticut. Drawn by a “nice data set that was waiting to be analyzed,” Jensen saw that he could immediately apply the methods of absorption spectroscopy to this new field.

“When you are looking at exoplanetary atmospheres, the process is very similar, because instead of looking at a star and looking through the interstellar medium to that background star, with an exoplanet what we’re doing is we have a star and we have a planet going around it. And when the planet passes between us and the star, then the planet’s in front of it, and some of the star’s light filters through what’s around the planet,” Jensen explained. He was able to analyze and compare data from the atmospheres of four separate exoplanets.

The most significant article from that research, Jensen said, was his analysis of hydrogen alpha, or haalpha, in the atmospheres. Haalpha is a wavelength of red light that’s absorbed by hydrogen, but only when hydrogen is warmed by energy, and therefore in an excited energy state.

“In only one target, but it was very clear, we did see that,” Jensen said. It was the first detection of haalpha in an exoplanetary atmosphere using the methods of spectroscopy.

“It tells us that the hydrogen has some source of energy,” Jensen said, which is probably some interaction between the star and the planet. The results were published in a 2012 article for The Astrophysical Journal, “A Detection of Haalpha in an Exoplanetary Exosphere.”

Since then, Jensen has done follow-up observations of the same target with the Keck telescopes in Hawaii, confirmed the 2012 results, and found what might be a bow shock, or hydrogen located out in front of the planet. He said that finding is particularly exciting, because “where we see that hydrogen out in front of the planet, it has the potential to tell us some things about the magnetic field of the planet” because the magnetic field is probably affecting it.

The team Jensen will lead as part of NExSS will focus on study of exospheres. He said what makes the group different is that it brings together earth scientists, planetary scientists, heliophysicists and astrophysicists. At an April meeting, he said, “(organizers) were really pushing us to talk to people outside our subfield and see what types of unusual connections we could make.”

Jensen said if his research into exospheres reveals something about a planet’s magnetic field, that information could suggest what might be happening in the planet’s interior. Connecting with somebody who understands more about how magnetic fields are generated inside planets could lead to both of them learning more than either one could individually.

That 8-year-old boy he was, Jensen said, would undoubtedly be surprised at what he’s been able to do and see as a scientist. But that could be just a small part of what’s to come.

Every research study, every program such as NExSS that focuses on exoplanets, helps refine analysis techniques so that as soon as the technology exists, scientists will be able to learn about exoplanets that are earth-size, and therefore more likely to support life.

“It’s something I hope to see in my career,” he said. 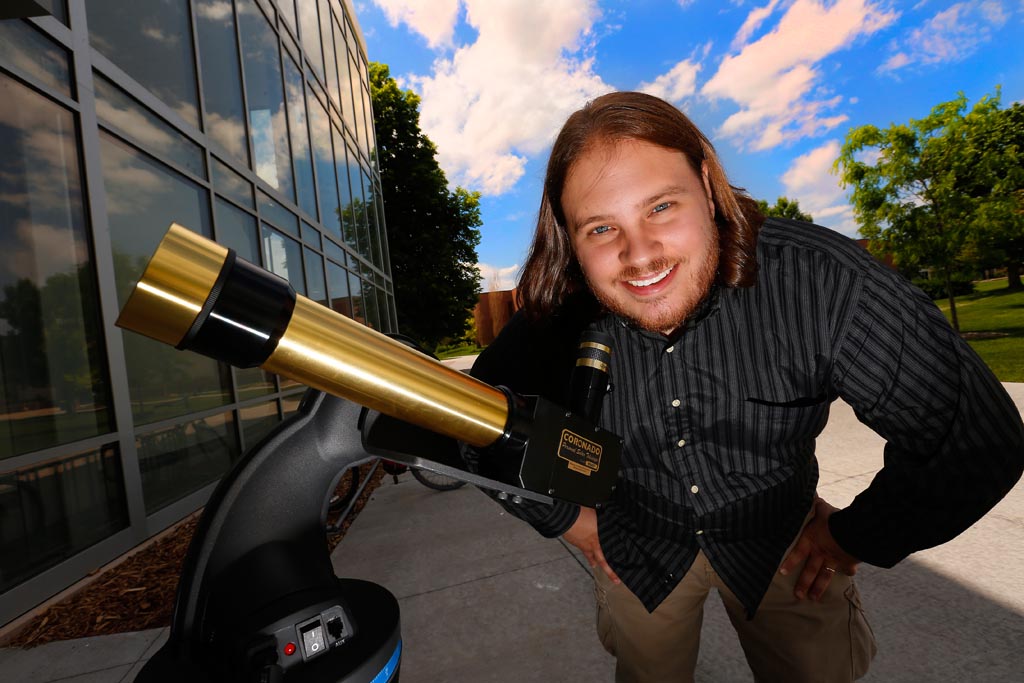 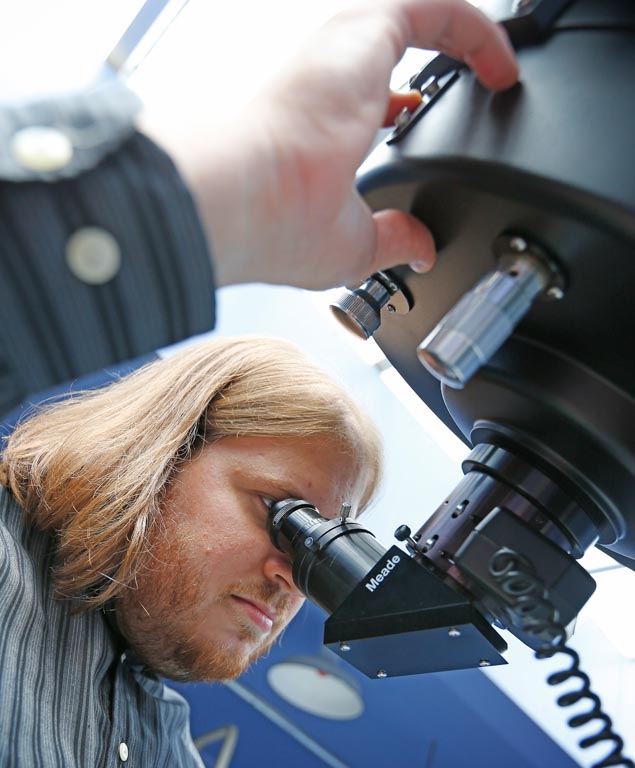