A young professor of marketing sits center stage at a desktop that’s full, but organized. She’s dressed simply, in a white shirt and black pants with classic lines. The office has the stark feel of a place someone is still moving into, with few personal mementos. She may be at the beginning of her career, but this woman’s  a professional who’s all business.

At least, Heather Schulz’s research suggests, that’s the role she’s writing for herself.

Schulz, an associate professor of marketing at the University of Nebraska at Kearney since 2011, has begun publishing research that uses theatrical concepts to study consumer behavior.

Building on a psychological theory that likens the way people create their identities to an actor’s performance, she  applies the theories to buying decisions. When people buy clothes or shoes or jewelry, she writes, they’re really choosing “props” to develop the roles they’ll play when they go before  a public audience.

While the idea that “all the world’s a stage” may not be new, applying dramaturgy the way Schulz has is a groundbreaking concept in her field of consumer research.

Words flow quickly when Schulz talks about her work, punctuated by a broad smile that hints at how exciting it is for someone just two years from her doctorate to have made such an impact. She laid out the concept in a 2012 article for the Journal of Research for Consumers and has delivered related presentations at a number of national conferences.

She has at least three manuscripts under review that build on her concept. Drawing from data she collected for her dissertation, Schulz at first found it difficult to get her ideas accepted by her peers.

“It was such a new concept, I was having a lot of issues my first year here trying to publish. I was putting out a lot of manuscripts, I was getting a lot of pushback at first,” she said, especially from the top journals in her discipline. “It was too big a leap, even the idea, for tier one journals.”

Not only is Schulz’s theatrical metaphor a new take on consumer research, her findings rely heavily on qualitative research from interviews, and many researchers aren’t comfortable with that.

“I was starting to get some doubts about my research, or did I collect the right kind of data,” she said, but that all changed once she was able to lay the foundation for her research in the 2012 article. “Now I’m getting some approval, so I’m going to plow ahead.”

Schulz’s ideas started coming together from her first year in the University of Texas at Austin’s doctoral program. Articles from her advertising theories class became her building blocks – the first, Grant McCracken’s “The Movement and Meaning Model,” explained how advertising creates social meaning for products, and consumers take on those meanings when purchase the goods.

The second, by Russell Belk, borrowed an idea from social psychology to argue that consumers’ purchases are an extension of their identities.

“He’s the one who introduced self-extension theory in consumer research,” Schulz said.  “I was kind of like, ‘that’s what I want to take to social psychology theory and  apply it to something more specific, not social interaction but consumer interactions, and consumer identities.”

The theory Schulz reapplied, impression management theory, was forwarded in 1959 by Erving Goffman. He used  the theatrical metaphor, and the terms of dramaturgy, to describe how people create identity through social interaction.

Schulz applied Goffman’s theory to consumers by looking at their brand choices. She surveyed 300 people and interviewed 20, asking questions about what clothing brands they would choose for different social situations, such as a night out on the town. Each interview was at a subject’s home, where Schulz would ask her subject to put together outfits. She took photos of the outfits and notes on the brands chosen, including how prominently the brand name or logo was displayed.

The private space of their homes, Schulz said, seemed to help people open up. Many became reflective about their choices, gaining insight into the images they’d been projecting “on stage.” Schulz said she was most surprised by how many people became defensive about their decisions. 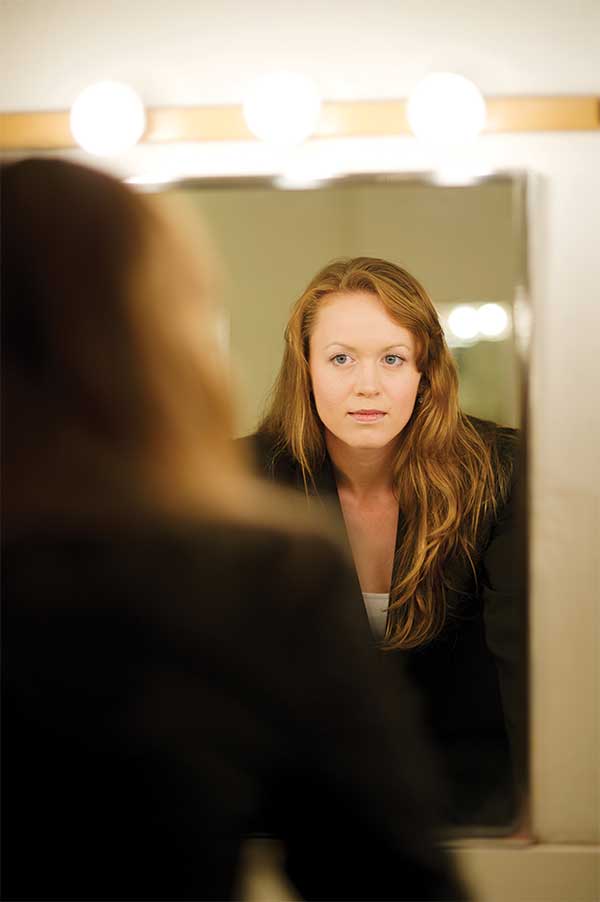 “About a quarter of the people, when we got to the second half of the session, they did not like answering those questions. You could see they got physically uncomfortable (discussing) their clothes, because it’s a reflection of their sense of self,” Schulz said. Often, she had to reassure subjects that she wasn’t judging them as vain or materialistic.

Schulz’s research found a very complex relationship exists involving consumers, their identities, their audience and their brand preferences. People are influenced not only by the characteristics they want to project, she found, but by the reactions they receive and the cultural meanings they apply to certain brands. For example, in one interview, a man named Ryan explained he usually wore Diesel jeans because he felt they had a masculine, low-key image, and that’s the image he wanted to project.

“There’s a lot of moving parts, and I think that’s again why qualitative research is so helpful when you’re trying to understand a new social phenomenon, or a new topic,” Schulz said.

“You’re going into their world, and I actually did that. I went to their individual homes to do the interviews, and I like that. I’m trying to understand their reality, instead of trying to make them see where they fit into my reality of my research . . . I like the messy details of qualitative research, and then finding some organization within that. Finding some themes from the chaos,” she said.

Articles Schulz has under review at various journals explore the themes she found in her initial research. One focuses on how consumers use brand-name products as props on their “stages,” while another uses role theory to look more closely at how groups influence the consumer/actor.

The third explores how brand prominence, or how conspicuous a brand is on a product, also plays a role in creating consumer identity. She said that idea has been written about mostly as it relates to high-income consumers, but her research suggests the effect exists for other demographic groups too.  She’s also identified some age and gender differences in the role brand prominence plays.

Future projects could include more work with the quantitative survey results, and a look at how Jungian archetypes are used in creating social identities.

Last summer, Schulz interviewed staff at an Omaha advertising agency to generate data about a different part of the branding process.

“The second narrative I’m going to try to start is how the advertiser could create the meanings that the consumer sees,” Schulz said, which would make her research applicable. Not only could the findings help companies with brand messaging, they would help consumers better understand buying choices and make them more aware of the signals they send.

Ultimately, all of Schulz’s efforts can be seen as part of the role she plays. As an academic and researcher, she said, in many ways she’s a storyteller. And there’s no way she can walk away from this story until it’s finished.

“I’m telling the story kind of piece by piece, keeping the stream of research going.”