Every teacher knows a student like him. The one in the back row. The one who doesn’t talk much, and mumbles when he does. The one who slides down in his chair, trying to make himself invisible.

Sometimes it’s difficult to remember much about those kids. But as a new teacher for Lincoln Public Schools in the early 1980s, Dennis Potthoff met one he’ll never forget. This boy, a seventh-grader Potthoff calls “Tony,” posed a question that he has been answering ever since.

“I had been watching him for the first nine weeks or so. I knew he wasn’t doing much of anything. He was a loner, he didn’t talk to anybody, slumped down in his chair, but every once in a while he’d do an assignment pretty good and you’re thinking ‘this kid’s got some talent,’ ” Potthoff said. So Potthoff called him in after school one night. To his surprise, Tony showed up.

“We had this conversation where I was getting totally beat up. I was trying to build bridges with him, trying to make connections,” but Tony answered in monosyllables only. “Finally he looks at me and says ‘I don’t know why I have to go to school anyway.’ ”

None of the usual answers — his future, his career, to get into college — meant anything to this student. “I’m ashamed to admit it…this is how badly I got beat up. I finally said to him ‘well here’s the deal Tony. You have to go to school until you’re 16, it’s the law. So you just as well get over it.’ ”

Now associate dean of the University of Nebraska at Kearney’s College of Education, Potthoff has spent the last three decades searching for answers to Tony’s question. Along the way, he’s helped shape the approach teachers take to their profession, not only through his teaching but with dozens of published articles and work with national and international education organizations. His work argues to Tony and other American children that they need schools because democracies need engaged citizens.

THE PURPOSE OF SCHOOLS

“That was probably a first big moment in my interest in the purpose of schools, and that became much more refined over time because I also learned from international travels that schools are very different around the world,” Potthoff said.

Potthoff is director of the American Democracy Project at UNK, which promotes student engagement with current issues, and led his college through two major initiatives to assess and improve its programs.

Answering Tony’s long-ago question has taken Potthoff into the heart of the debate over national education standards, for which the federal No Child Left Behind legislation has become the “poster child.” Roughly, the debate breaks down into two camps – those who believe schools should prepare students for careers, and those who think schools should prepare students for citizenship. As Potthoff and colleague Ed Walker explained in a 2009 article for the National Network for Education Renewal, No Child Left Behind has led to more standardized curriculums and testing. It’s also shifted who controls schools, with local school districts making fewer and fewer decisions.

In the article “School Goals in an era of Accountability: Getting Back to the Basics of Educating in a Democracy,” Potthoff and Walker looked at the question of what goals should drive educational reform. They surveyed 900 parents, educators at all levels and students in UNK’s teacher education program on support for 12 educational goals, from teaching vocational skills to fostering creative and aesthetic appreciation.

Survey results showed strong support for all the goals, which argue against educational reforms that stress workplace skills over everything else.

“All groups believe schools are, among other things, to form democratic character, to form interpersonal skills, to form character,” he said, yet that’s not what government policies emphasize.

NETWORK FOR EDUCATION RENEWAL,  AND ATTITUDE

Potthoff promotes a broader purpose for schools as executive director of the NNER, a network UNK joined in 1996. The network’s mission is to promote the same 12 goals Potthoff and Walker used in their survey, which were first proposed by educator John Goodlad.

A proponent of Goodlad’s ideas for decades, Potthoff said he was happy to learn, when he was hired, that UNK was part of NNER. “I thought ‘Gee whiz, this is Tony all over again.’ I’ve been bothered by this Tony story for 15 years, now I’m in a place where they’re really thinking about this stuff.”

Potthoff regularly writes articles for the network’s journal, blogs and gives presentations at NNER conferences. His message is not that schools should fight nationalized testing and standards, but instead should look at the trend as a challenge, and make the national goals work for them.

“We don’t want to sort kids any more. We want to raise all kids up… so it’s in the schools’ best interest to take steps to help kids learn more so they’ll do better on the tests. That doesn’t thrill me, but (it does thrill me) if you just stop and say ‘we’ve got to do some things to make these kids learn better.’ ”

While Potthoff has always seen schools as offering more than job training, he said his philosophy began to evolve in the mid-1980s, during the year he taught at a middle school in Ontario, Canada, through a teaching exchange program. 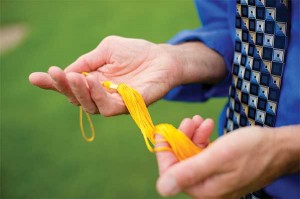 Potthoff said there were many similarities between the school systems in Canada and the United States, but there was a key difference in attitude. For example, Canadian students were taught French from kindergarten on even then, while bilingual education is still relatively rare in America.

Those differences came into focus for Potthoff when he was again asked a difficult question – this time, by a German social studies teacher named Thomas.

“We were at a function one night and we were talking about international politics and he said to me something like ‘surely, you don’t think the Cold War was only the Soviet Union’s fault,’ and I was sitting there thinking that every textbook in the United States told that story. We were just trying to protect the world from the Communists.”

That and other international travel, including a trip to Taiwan as a keynote speaker, has broadened Potthoff’s perspective on education and showed him what’s truly important to a democracy.

A second emphasis of Potthoff’s research has been to look at just how teachers can accomplish that purpose. One key, he’s found, is collaboration. 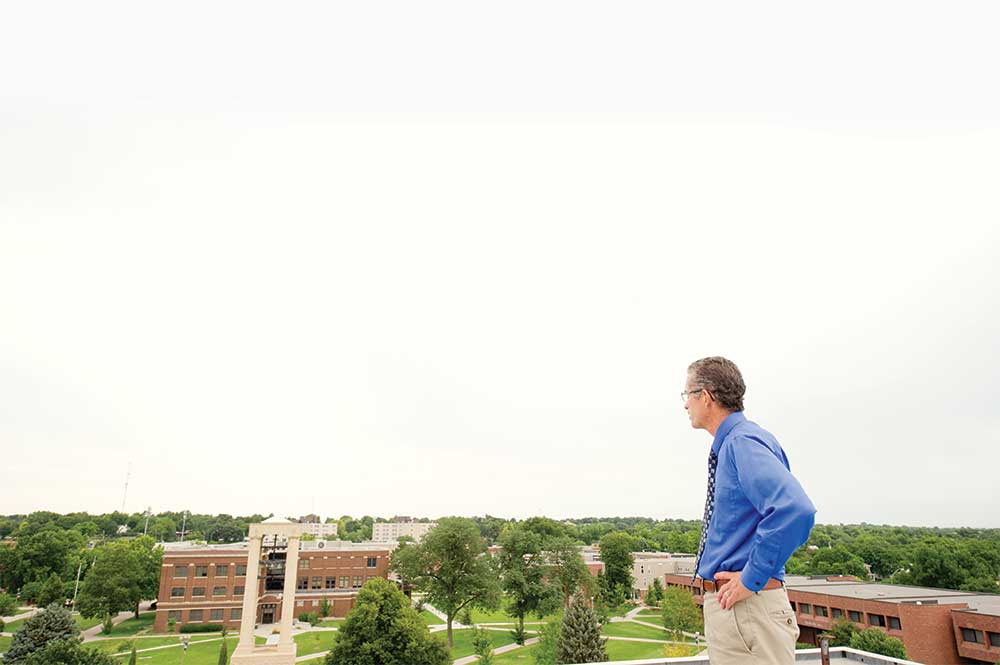 Many teaching methods changed because of that program, but Potthoff said a bigger impact might have been the collaboration among faculty.

Potthoff detailed the process in a number of refereed articles, including 2004’s “A Bucket of Eels: A Tri-partite Approach to Renewing a Teacher Education Program” in the Journal of Teacher Education.

“We helped establish the culture, that it is OK for a college on the university campus to do this kind of work across departments, to learn from each other,” he said.

That initiative also identified technology as key to reaching a diverse student population, and since then the college has embraced tools such as SmartBoards and online classrooms.

Online classes were a key part of a second initiative, which Potthoff also coordinated, that looked at ways to differentiate teaching within the university. In 2012, he and other coordinators received a $25,000 grant from UNK’s Kelly Fund to assess those efforts.

Along with Potthoff’s other work, he’s active in the classroom. A key part of his teaching methods class is the day he tells his freshmen about Tony, and asks how they would respond.

“I go ahead and tell them how badly I botched it,” he said, but his real goal is to start his students on their own quest for an answer. In America, he said, we can’t settle for anything less.

“All groups believe schools are, among other things, to form democratic
character, to form interpersonal skills, to form character,” says Dennis Potthoff.

“My scholarship is driven by my love of teaching. I want to study how to get better at teaching,” says Dennis Potthoff.

Dennis Potthoff is director of the American Democracy Project at UNK, which promotes student engagement with current issues, and led his college through two major initiatives to assess and improve its programs.