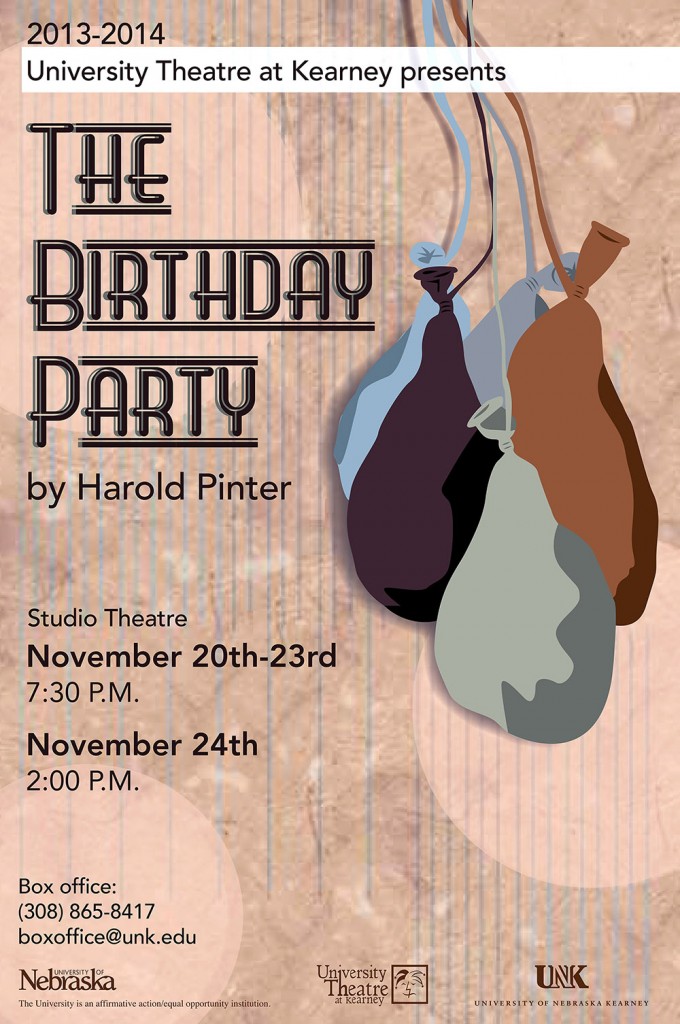 KEARNEY – Expect the unexpected at “The Birthday Party,” a student-directed production at the University of Nebraska at Kearney.

“Come in with an open mind,” said Megan Buresh, a senior theatre major and student production director. “It’s all about realizing that the play is about tension and conspiracy.”

Written in 1957 by Harold Pinter, a Nobel Prize-winning English playwright, screenwriter, director and actor, “The Birthday Party” takes place in a small house at a coastal resort. There lives a man, his mentally wayward wife and their boarder who has been with them for a year.

The boarder is strange, unkempt and running away from something unknown. Enter an even stranger sleek Jewish man and his muscle bound Irish henchman. The mentally immature wife accommodates them with a room and then decides that it is time for the boarder to have a birthday. At the party she arranges, the new guests play cruel games with the boarder, break his glasses, make a buffoon of him and push him over the psychotic precipice.

Buresh describes the absurdist play as erratic, violent and seductive. “It really keeps the audience on their toes,” she said.

Absurdist theatre, primarily written in the late 1950s, expresses the belief that life is irrational or has no meaning or purpose. Sponsored by the theatre honorary Alpha Psi Omega, “The Birthday Party” is the theatre department’s only student-directed play this academic year.

“As a student-director it’s been fun to work with students I’m in class with or students that are younger than me and to collaborate,” Buresh said.

To become a student director, requirements include taking a directing class, directing a 30-minute one-act play, being a member of Alpha Psi Omega and applying to become director. As part of the application process, students must submit their vision for the production.

Students auditioned for “The Birthday Party” at the beginning of the semester and rehearse for six weeks before the show.

“I’ve seen a lot of growth with the student actors and that’s exciting,” Buresh said. “They pour their hearts and souls into it.”