KEARNEY – Jon McBride is not the man he used to be.

He moves a bit more slowly. He doesn’t smile or laugh the same way he used to. His left hand shakes as it sits in his lap.

But the longtime athletic director is more courageous than ever. 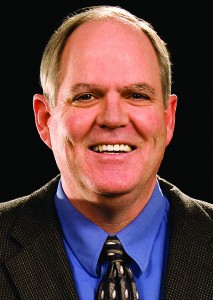 “People are used to Jon McBride pre-Parkinson’s, and now there’s Jon McBride with Parkinson’s,” he said. “It’s different. I don’t walk the same, I don’t move as quickly, I’m not as expressive. So I’ve changed. So be it. That’s where we are, and now we move forward.”

Moving forward is nothing new for McBride. His father passed away when he was just 8 years old.

“I didn’t have a father growing up. My mom raised me,” McBride said. “Everybody goes through life with different adversity, different settings and situations. I’ve just always been able to deal with adversity.”

One of the challenges McBride faced after being diagnosed, in 2009, with Parkinson’s disease, was making the decision to step down from his position as athletics director at the University of Nebraska at Kearney.

“To have to step away before I’m ready to step away was an incredibly difficult decision,” he said. “You feel like you’re stepping away from a group of people who are your family. I spent a lot of time trying to get things done on their behalf, and we’re not to where we want to be as an athletic department. You almost feel like you’ve let them down.”

McBride isn’t stepping away from the university. He finished his duties as athletics director Sept. 1 and now works part-time as an assistant to the chancellor – a position that allows him to continue contributing to UNK and focus on his health.

“I’m a glass-is-half-full type of person. I’m going to fight it.”

McBride’s optimism shines through despite the day-to-day challenges he faces. 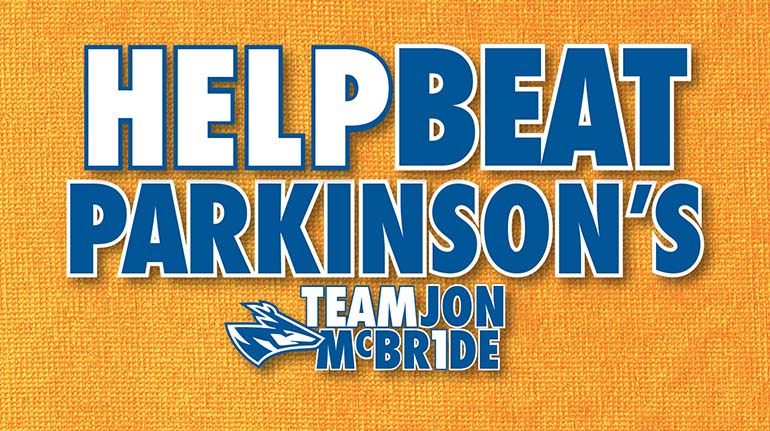 Standing up, walking across the room, showering, getting dressed – these are everyday struggles for McBride.

“The ordinary isn’t ordinary,” he said. “The everyday things, the easy tasks that you don’t think about doing, become a task.”

Exercise is key to maintaining muscle movements, according to Dr. John Bertoni, professor and director of the Parkinson’s Disease Clinic at the University of Nebraska Medical Center.

“I believe very strongly in exercise therapy,” said Bertoni, who treats McBride. “The more and more studies that are being done on this show that it may be as good as pills in many cases.”

Parkinson’s disease is a degenerative condition that affects muscle movements, Bertoni said. Sufferers may have tremors, stiffness and rigidity, slowness and trouble walking.

In addition to struggling with muscle movements, Parkinson’s sufferers also have issues with motivation. “The part of the brain that gets your initiative going is also affected. These people have two problems – it’s hard to move, and it’s hard to get yourself motivated to move,” he said.

“Physical exercise is one of the best things you can do for your brain health.”

McBride has been working with Matt O’Neill, physical therapist and owner of Alpha Rehabilitation in Kearney, for more than a year.

O’Neill, a physical therapist who specializes in neurological symptoms and illnesses, helps McBride work on strength, balance and movement recovery.

“The number one key to success, and we see this across the board with all of our patients, is Jon’s drive. It’s really been a testament to who he is and his spirit,” O’Neill said. “Yes we all have bad days, but his attitude toward this whole thing has lined up really lockstep with us, which is ‘let’s push, let’s see what we can achieve, let’s push for that next step.’

“Going from having trouble getting out of a chair to the ability to jog shows a lot of character. That shows a lot of determination beyond what the diagnosis tells you.” 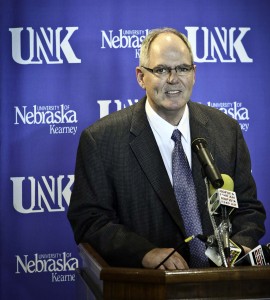 McBride’s drive has benefitted him physically. But he’s still trying to figure out how to cope with the idea of spending the rest of his life battling the disease.

“The emotions of this whole process are pretty overwhelming at times,” McBride said.

“To know you have something and it’s not going away, and to be on the medicine routine that I’m on, it’s much different from what I’ve been used to my whole life. It’s a learning process.”

The support of family, friends and the community has encouraged McBride to stay positive.

“I can be positive, but I need positive people around me too. That’s really important in this process,” McBride said.

“Just knowing someone cares and wants to understand and asks what they can do for you, that means a lot.”

Sharing his story and informing people about Parkinson’s also keeps McBride looking at the bright side of his diagnosis.

“Parkinson’s isn’t a death sentence,” McBride said. “I think that’s important for people to understand. You still can function and be very capable as an employee. You have to maintain your lifestyle a little differently and avoid some of the anxieties and stresses you’ve dealt with your whole life because now you have another set of stresses and anxieties to deal with.

“If I can help somebody get better or better understand Parkinson’s and know how to deal with it, then I’ll feel successful.”

The cause of Parkinson’s could be related to genetics, the environment or the metabolism of an individual, Bertoni said. Although the cause is often unclear, treatments for the disease are improving.

But attitude is everything, Bertoni added.

“We need more people with the same attitude Jon McBride has,” he said. “He’s a fighter and he’s going to fight this, and we’re going to be there with him.”

“I wish we could clone his attitude. A lot of people want to retreat. But he’s courageous. That’s the kind of thing that we need to show people – that you can fight this, and you’re not all alone in fighting it.”