When asked about his lifetime study of  French writer Marcel Proust, Herbert Craig, a professor and former chair in the Department of Modern Languages, smiles broadly and says simply: “I have a passion for Proust. Yes, yes, yes.”

It is a passion that has made Craig the international expert on Proust in the Spanish-speaking world. Considered one of the greatest novelists of the 20th century, Proust (pronounced Proost) is best known for his seven-part novel In Search of Lost Time
(The Remembrance of Things Past). The French novelist, critic and essayist lived from 1871-1922.

“She encouraged me to study what I was interested in.” He next recalls reading Proust while he was in the Army, stationed in Hawaii. It was 1971, the year of the Proust Centennial. That same year, an article by Cuban writer Alejo Carpentier noted: “All Spanish American writers of his generation owe something to Proust.” 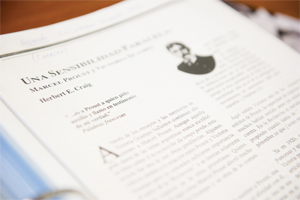 Craig credits that article for his inspiration to study the literary relationship between Proust and Spanish America, an inspiration that became a lifetime focus for Craig. He has since searched through major libraries on three continents—South America, North America and Europe–finding and recording the literary connections between Proust and Spanish American writers.

He calls his work on Proust “The French Connection,” meaning that the work is not only about Spanish American writers, but also about France.

“I found I really liked him (Proust), even though he was a difficult writer,” Craig said. “He wrote sentences that lasted pages. He analyzed people very carefully; he thought like I did. I felt then that I needed to find a way to work on Proust.”

In 1976, before earning a second master’s degree, he received a Fulbright-Hays Fellowship to do research on Proust in Argentina. He spent nine months in Buenos Aries doing research in the libraries. Craig said that he began studying the connection between Proust and Argentinean writers, because “Argentina was the most ‘Frenchified.’ It is a country of immigrants interested in French writers.” However, surprisingly, the first mention of Proust was not found in Argentina.

“I was looking for the earliest (Spanish American) article published on Proust,” Craig said. “It was in Venezuela in 1920. I think his friend (Venezuelan) Reynaldo Hahn had something to do with that. Venezuela is not a country that is European. That was a surprise. I expected it to be in Argentina.” 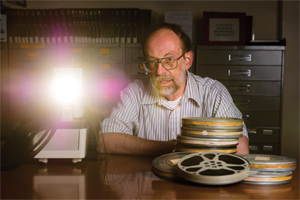 The Venezuelan article about Proust was published shortly after he received the prestigious Le Prix Goncourt, a French prize awarded to the author of “the best and most imaginative prose work of the year.” Awarding the prize to Proust is said to be one of the most controversial selections in the history of the Goncourt, in part, because the award typically went to young, beginning authors who showed promise. Proust was 48. However, Proust was just beginning his career as an author, which fulfilled the primary criteria for the prize.

“Proust wrote about high society,” Craig said. “He was interested in the nobility of France. Some did not like it very much, because he was a bit satirical. He showed the foibles of people.”

However, Craig said, Proust is best known for his treatment of memory and time. Proust coined the term “involuntary memory,” a concept in which cues in life evoke memories without any conscious effort, as opposed to voluntary memory, which is making a conscious effort to remember details from the past. Perhaps the best known example of using involuntary memory in Proust’s writings is called the “episode of the madeleine (French cookie)” in which a madeleine and a cup of tea remind Proust of an earlier incident in his life. Proust has given madeleines a bit of a reputation by describing them as “a little shell of cake, so generously sensual beneath the piety of its stern pleating…”

In 2002, after years of meticulous research, Craig published his first book: Marcel Proust and Spanish America: From Critical Response to Narrative Dialogue. For the book, he studied the work of 50 different writers and found connections. To do the research, he traveled to 16 Spanish American countries, often spending a month or more doing research in major libraries in each country. The research took him to Spain eight different times.

“Others have studied Proust, but most study a single aspect. It’s (his book) pretty thorough,” Craig said, noting the completeness and complexity of his studies, as did a 2005 review of the book by Stephen Hart of the University College London. The review was published in the “Bulletin of Hispanic Studies.” Hart wrote, “(The book)…is clearly based on a great deal of painstaking archival research—for which the author is to be commended…” Yet another reviewer, Richard Bales of Queen’s University in Belfast, wrote: “Craig’s critical bibliographical backup is exemplary, and gives additional substance to a book which is notable for simultaneous breadth and depth of investigation.” Guillermo David, an Argentine author, said of Craig: “The fact that he (Craig) undertook this research in a third language other than his own native English, in addition to French—the language of the very author (Proust) being researched—doubles not only the difficulty assigned to such a task but also the merit of his work.

“In his research are found multiple cultural crossroads that provide a paradoxical twist, rich in new perspective, with careful consideration of the historical events that serve as a backdrop for the author’s work…the challenge undertaken (has) consumed the majority of Craig’s most intellectually productive years and molded his professional life.”

David added: “He (Craig) never imagined that this enigma turned calling would determine his destiny and to the joy of Proustian readers make it possible for him to take on the immeasurable challenge of cataloguing a century’s worth of Proustian works produced on two continents. Herbert Craig undertook this task, which would have been discouraging even to the most daring, with patience, determination and unparalleled skill. He confronted the improbable task of investigating a new frontier never explored by Academia.”

Craig is currently editing a second book on Proust and Spain, Marcel Proust and Spain: Critical and Narrative Trajectories. A third book with an Argentine colleague is in the process of

Beyond the books, Craig’s publication history further reflects his lifelong work. He has published nearly 20 peer-reviewed articles in three different languages—English, French and Spanish—worldwide. In addition, he has had 10 articles published in international journals where the work was selected for inclusion by an individual rather than by a committee. A little more than a year ago, he was asked to write a piece about Proust for an encyclopedic dictionary published in Madrid, Spain.

“In addition to writing for scholarly journals, he has served as an editor for a number of national and international publications, and as a reviewer for numerous essays and books by other authors.

Beyond the many publications, Craig has presented papers at more than 30 national and international conferences. Over the years, the conferences have taken him to professional gatherings in more than 10 states and six foreign countries, including Costa Rica, France, Puerto Rico, Spain and Venezuela. He was invited to present his research on Proust at major conferences in Spain and Uruguay.

As Craig talks about his research, he often punctuates the ends of his comments with a smile and the softly-spoken series of affirmations: “Yes, yes, yes.” It is a habit that likely stems from his years of encouraging students in his French and Spanish classes.

“I came to UNK to teach translation in French and Spanish,” he said. He joined the UNK faculty in the fall of 1989, after having taught and chaired the Department of Foreign Languages at Bethany College in Lindsborg, Kan. At UNK, he teaches classes
in Spanish, Spanish American literature and translation, and has served as the departmental chair.

“I also teach students about novels from my research, but I have to be careful,” he said. “I don’t teach just those novels.”
In addition, Craig teaches classes in Spanish American film. “I am a specialist, but my teaching is also broad,” he said.

In a letter of recommendation for the Pratt-Heins Award, Sonja Dams Kropp, chair of the Department of Modern Languages, wrote: “…I would like to take this opportunity not only to express my admiration for the breadth of Dr. Craig’s scholarly activity, but also to emphasize the significance of this record in light of a few of his other contributions in the department,” noting that Craig gave up scholarly release time to teach additional courses.

“He has consistently volunteered to teach a graduate evening course in Spanish, in order to accommodate nontraditional master’s degree students,” Kropp said. “Dr. Craig’s enthusiasm and kind concern for students—who unanimously praise his intellectual stimulation—may be helpful to measure the extent of his dedication as a scholar-teacher.”

And his students excel. A graduate student of his, Erin Roark of Kearney, was named the UNK Overall Thesis Winner last spring for her thesis titled “Calo Identity: History, Self-Perception and Self-Expression as Portrayed by Tony Gatlif’s Film ‘Vengo.’”

Roark’s thesis has been submitted to the Midwestern Association of Graduate Schools (MAGS). The MAGS awards recognize and reward distinguished scholarship and research at the master’s level. To be considered, the thesis must contain work that makes an unusually significant contribution to the discipline.

Craig is modest about his own awards. In 2010, he received the prestigious Pratt-Heins Award for Scholarship and Research. When asked to describe himself as a scholar, he says: “I am following a tradition. I have devoted my life to studying the letters of Proust.”