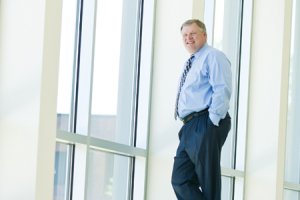 At the core of the University of Nebraska at Kearney’s growing recognition by U.S. News and World Report as a “top 10 Regional Public University in the Midwest” is its commitment to teaching and learning through the scholar-teacher model, where professors bring their intellectual prowess to students in the classrooms, in the studios and laboratories, and as partners with students through graduate and undergraduate research projects.

We hope a glimpse of the work of some of the scholars portrayed in these pages will provide fresh evidence of UNK’s contribution, as a university community of scholar-teachers, to the well-being of society within our state, the nation and beyond.

Topics represented here include a broad array of intellectual pursuits including the cover story featuring agriculture economist (and native Ghanian) Dr. Frank Tenkorang, whose timely focus on the impact of U.S. ethanol production on global corn availability is shedding important new light on the fuel-versus-food issue. Political scientist Dr. William Aviles, whose family roots trace to Colombia, has become known for his expertise on politics in Colombia and Latin America. He is especially interested in the role of the military of the region and how it effects developing democracies.

Closer to home, criminal justice expert Dr. Joseph Carlson’s study of prison nurseries, especially incarcerated moms, has been noted in such national media as Newsweek and Marie Claire. Dr. Carlson hopes to promote his findings that demonstrate helping mothers and newborn babies within prison walls can reduce misconduct and recidivism, as well as help protect children from entering a cycle of criminal activity and incarceration.

Dr. Linda Crowe is another professor (communications disorders) whose research into language development of children has been noted nationally. Many of her most recent publications were co-authored with students as a part of UNK’s highly respected program of undergraduate student research. Also from the College of Education, early childhood educator Dr. Dawn Mollenkopf has been successful in creating a program to bring online degree and certification programs to preschool teachers across Nebraska, an especially important program for teachers in some of the most remote, rural areas of the state. In all, she has been awarded more than $3 million in federal grants to support her work.

Management professor Dr. Kyle Luthans has emerged as one of a small group of leaders in a new global movement called “psychological capital” (PsyCap) that is changing the way businesses value their employees. He says that PsyCap is a “strength-based approach, emphasizing the positive psychological resources employees possess.”

English professor Dr. Marguerite Tassi is writing about Shakespeare, with an unusual twist: women and revenge. Among the provocative questions she addresses: Can there be virtue in vengeance? Offering Cordelia in “King Lear” as an example, Dr. Tassi has discovered that Shakespeare’s women “more often than not, met the conditions for virtuous vengeance.”

Dr. Darlene Cowles Mitchell offers her creative output as a music composer extraordinaire. With more than 150 compositions to her name, 100 of which are published and widely performed, Dr. Mitchell’s approach to music is distinctly contemporary—characterized, some will say, by a remarkable ability to use musical instruments and complexly dissonant harmonies in unique and strikingly beautiful ways.

Certainly, the University of Nebraska at Kearney has matured and grown impressively throughout its history. In this magazine, we want to share with you the increased academic value provided students by our professors, including the quality and quantity of faculty scholarship and creative activity, a sampling of which is on display in this, the third annual issue of New Frontiers.