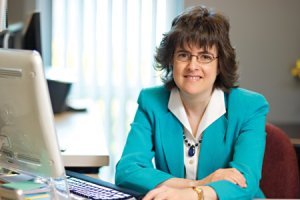 About the same time, federal requirements for Head Start teachers changed, and she realized that her associate’s degree would not keep her qualified for long. She called Dr. Dawn Mollenkopf, an associate professor in the UNK Department of Teacher Education, looking for a way to earn her bachelor’s degree online. Mollenkopf had to turn her away, because at that time, most of the classes Bigley needed were only offered on campus, during the day. With a roughly two-hour drive to Kearney from her home or school, there was no way to make the program work for her.

“That was disappointing,” Bigley said. “I wasn’t sure what I was going to do.”

Today, more and more preschool teachers are facing the same challenges, as the national push to improve education creates higher standards for teacher qualification and professional development. In the last six years, Mollenkopf has helped meet those teachers’ needs through programs and studies funded through four major federal grants totaling more than $3 million.

The first, a U.S. Department of Education grant for more than $1.7 million awarded in 2004, was aimed directly at Head Start teachers such as Bigley. Mollenkopf collaborated with Nebraska’s two-and four-year colleges to create articulation agreements, increase the number of course offerings and make courses more accessible. She said some colleges added courses, while others changed when or how courses were offered. The result, she said, is that it is now easier for preschool teachers all across Nebraska to find the classes they need, online or at times they can attend, and they can put together credits from many colleges to round out their degrees. 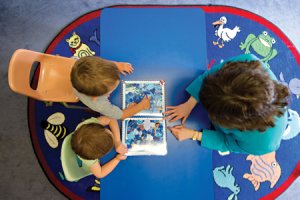 The grant, along with a state T.E.A.C.H. scholarship, also paid the tuition and other expenses for more than 150 Head Start teachers to go back to school. The teachers were from high-need school districts, determined by the poverty level in the district or the percentage of students who were part of the federal school lunch program. Some were in urban areas, such as Omaha, while others were in very rural areas. The latter included the Winnebago Native American Head Start program.

Addressing the challenges of rural teachers has been a priority for Mollenkopf since she came to UNK in 2003. Only a year earlier, the university had begun reorganizing and streamlining its endorsements to make distance less of a problem for rural students. As Mollenkopf outlined in a 2009 article for The Rural Educator, the UNK Department of Teacher Education first combined two endorsements to create the early childhood unified endorsement. That got a lot of interest from rural teachers and superintendents, which pushed the university to go further.

“(The department) was challenged to create a professional development certification track that would be accessible to rural teachers, while allowing them to use their current teaching placement and other locations in their towns to meet field experience and practicum requirements,” she wrote. Mollenkopf met that challenge by putting more classes online and creating more flexible assignments, with greater options for how students could complete them. She also created more options for field-based methods courses, such as online mentoring through Blackboard journals. Accessibility and flexibility, Mollenkopf said, have been key components in her effort to get preschool teachers the training they want and need.

Mollenkopf’s focus on early childhood education began when she taught elementary children in rural Oregon. She saw children coming into her elementary school classroom with a wide range of abilities, learning styles and disabilities. 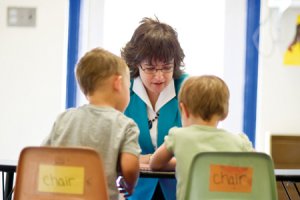 “I thought ‘until I understand a wider range of kids, I’m
not going to be able to make any difference,’” she said, which sparked a dual interest in preschool and special education. At that time, she said, most people viewed those as completely separate areas of specialty. However, she saw a connection, and in 2002, she earned a doctorate from the University of Kansas in special education policy integration with a secondary emphasis in early childhood education.
In recent years, more educators have acknowledged, and responded to, the overlapping interests of early childhood and special education, which come together in the preschool environment, according to Mollenkopf. There, teachers get their first chance to find and meet the wide range of educational needs students bring with them into school.

For more than 20 years, public policy has turned toward creating universally available, high-quality preschool programs as a way to improve student performance throughout the system. Along with federal funding for preschool programs have come higher standards for teacher certification and professional development. An example is the Head Start program, which currently only requires teachers to have a child development associate credential. By 2013, however, at least 50 percent of the nation’s Head Start teachers must have bachelor’s degrees.

The idea is that requiring Head Start teachers to have a higher level of education will benefit both teachers and children. Mollenkopf said the Head Start teachers she worked with as part of her first federal grant showed gains. The gains were measured with two separate assessment tools. Their students were also tested each semester, and the students demonstrated significant gains on four different performance tests.

Bigley, who was not part of the program but eventually did earn a bachelor’s degree, said she agrees that teachers benefit from the additional training. She noted that there were many lessons she learned in the seven years of on-the-job training that would have been helpful for her to have known when she was first beginning her career.

“One of the biggest things I’ve picked up is how to be developmentally appropriate,” she said, “not just for the age group, but tailoring lessons to individual students.” That’s especially important in a Head Start classroom, she said, where students come from such diverse backgrounds.

Classroom techniques and teaching strategies are only part of what teachers get from higher degrees and professional development, Mollenkopf said. Those who participated in the grant found other career benefits as well. “The teachers believe now they are professionals. They talk to their friends differently. They get different positions, and better positions. The degree itself is not going to change the world, but we are helping to raise the bar.”

Even as policymakers have tried to improve the preschool system, Mollenkopf said, they have created a professional development issue for teachers. In a 2008 article for the Journal of Research Methodology, she cited a study showing that fewer than 50 percent of all preschool teachers had bachelor’s degrees. This “educational deficit” can be even greater in rural areas. Furthermore, she said, it is difficult for working teachers to find the time and money they need to go back to school.

That was the case for Bigley, who earned her bachelor’s degree over four years, in part, by taking night classes. Many days, after Bigley left work, she then drove the 50 miles to school for class, drove the distance back home after class, and then got up early the next day to go to work, again.

Over the two years of the grant, Mollenkopf said, she developed a greater sense of the challenges facing those high-need areas. The preschool students brought in all the challenges associated with high poverty rates, such as lack of preparation and parental support, while the teachers had less training than average and a higher turnover rate.

Delivering college courses for these teachers, she found, took greater flexibility than usual. She now creates and structures assignments with the situations of her students in mind, for example making it possible for her students to submit Individualized Education Plans on the students they see in their own classrooms.

“There are more real-world applications for the assignments now,” she said, “because I have so many different kinds of people. They literally have it tailored to the different jobs they have.” In the tribal area, for example, Internet access was unreliable. One night, when a student called to say she couldn’t get her assignment in because the power was out, Mollenkopf took her report orally, over the phone.

“As long as she’s demonstrating the knowledge the assignment is designed to measure, why not measure it any way you can?”

Working with the Winnebago Head Start program also highlighted the special cultural needs of those students. Mollenkopf said she hopes to address these special needs of the tribal area with the Nebraska Native American Professional Development Project, a nearly $400,000 Department of Education grant that will run through 2012, and with a second $350,000 federal grant.

With these, Mollenkopf and the Nebraska Indian Community College will help 10 Native American students complete their bachelor’s degrees by delivering more upper-division UNK courses through alternate methods and providing them mentors.

Another need Mollenkopf identified through the original grant was for a complete online bachelor’s program in the early childhood unified endorsement at UNK. That will be accomplished by the fall of 2010, with help from a $95,000 grant.

From the beginning, Mollenkopf said, she knew she wanted to put more classes online. “What I began to see is we had all these groups that needed education,” she said, and how difficult it was for teachers to access that education. “Very quickly I knew I wanted to put the whole program online.”

That turned out to be good news for Bigley, who called Mollenkopf again in 2009. She had found out the Madison Elementary School was going to start a preschool program, but to take part she would need certification.

“I had my fingers crossed” that this time UNK would come through, Bigley said.

Mollenkopf smiles as she recalls hearing Bigley’s voice mail. She remembered her, and how it had felt to turn away someone who wanted an education.

“I was able to call her back and tell her that ‘everything you need is now online,’” Mollenkopf said.

In another year, Bigley will have her teaching certificate for prekindergarten through third grade, having done all of the classes via Blackboard.