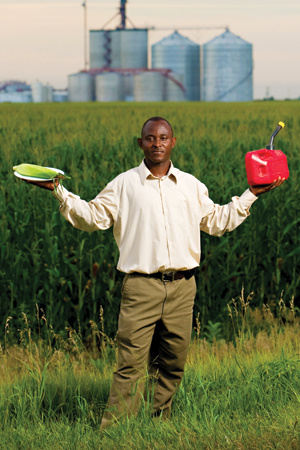 How does a city boy from West Africa’s Ghana find his calling as an agricultural economist in the heart of Nebraska farm country? For Dr. Frank Tenkorang, UNK assistant professor of economics, the path included side trips to rural and city classrooms in Ghana, plus universities in Wyoming and Indiana.

“When I came to the United States, my goal was to find a place like UNK, a small place to teach classes and do my little research,” Tenkorang said modestly from his third-floor office in the West Center. That “little research” has involved compiling and computer modeling data from other studies to identify trends in Nebraska, the Midwest Corn Belt and the world.

Regional topics have included the use of new farming technologies, factors that influence ethanol plant locations and production levels, and the role of price forecasts and farm policies on farmers’ planting decisions. Research currently in progress aims to identify the impact of U.S. ethanol production on global corn availability, also defined as the fuel-versus-food issue.

The debate centers on the influence of a U.S. renewable fuels standard in boosting corn production and sales for ethanol processing. As grain and food prices skyrocketed in the summer of 2008, the corn-based ethanol industry suddenly went from a leading role in advancing the goal of a home-grown alternative-fuel future to the villain triggering worldwide food shortages.

Ethanol officials defended their industry by saying that many factors contributed to food shortages and high prices, including high production and transportation costs linked to non-ethanol energy sources. They explained that ethanol comes from field corn, which provides only about 10 percent of the corn used directly for food. Most field corn is used for fuel production and for livestock feed.

As a consultant for the United Nations Food Agricultural Organization in 2004 and 2007, Tenkorang’s work is helping forecast how much fertilizer would be needed to meet the growing population’s world food needs as projected for 2015 and 2030. 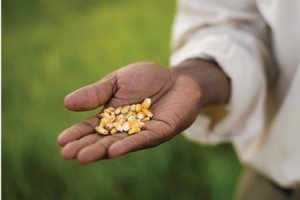 The United Nations estimates that today’s world population of more than 6.85 billion people will grow to 8.9 billion by 2050. The food demand linked to that growth raises many natural resource issues, including pollution, deforestation, and limits on tillable land, water and fertilizers.

Finding solutions to these and other issues is often accomplished through collaborative research, such as the work Tenkorang does with other UNK faculty on information technology, truck safety and international trade.

Tenkorang’s research partner for many studies is Dr. Deborah Bridges, another UNK economics professor. Tenkorang said they are about 25 percent finished with a project to create economic models to study the variables within ethanol-food-fuel issues.

“We’re looking at the global impacts, because if the United States uses most of its corn for ethanol, it can lead to higher grain prices in the world,” Tenkorang said. “Studies done in the United States showed it did have an impact (on 2008 food supplies and prices), but not as much as the world was claiming. There were other factors.”

Tenkorang grew up in a large family in Ghana’s capital city of Accra, where his father owned a hotel and his mother was a secretary for a government agency. As a boy, he wanted to be what his parents wanted him to be. For Ghanaian parents of boys, that was a medical doctor.

“All the guys had that mentality of going to medical school,” Tenkorang said. “We had only two medical schools in Ghana, so it was very competitive.” First, high school graduates had to do a year of public service. He chose teaching, and initially was assigned to a very remote area. “There was no electricity and no good water,” he said. “Nobody wanted to go there. The students couldn’t even tell the difference between P and Q.”

Tenkorang completed his year back in the city teaching third-grade girls who already were excited about someday going to college. The enthusiasm rubbed off on him, and he enrolled in the University of Ghana College of Agriculture that offered majors in plant science, animal science, economics and engineering. 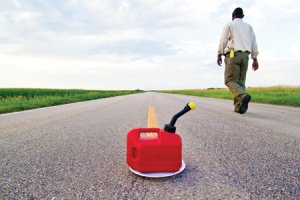 “The first three years, you are just floating (taking courses in all areas) and then you specialize,” Tenkorang said. “I chose the economics side.” He explained that Ghanaian students must prepare for college in high school by taking the appropriate preparatory classes for the medical college or the agriculture college.

So why choose economics? “It was the most prestigious major (at the agriculture college) as far as getting a job. It was very competitive,” Tenkorang said, adding that he had toyed with the idea of majoring in animal science, because one of his uncles was a veterinarian.

Like Nebraska, the backbone of Ghana’s economy is agriculture. Instead of corn, cocoa is the main cash crop, and Ghana is the second largest cocoa exporter in the world. The country also is a young democracy. Tenkorang said Ghana became independent of British rule in 1957, but emerged only in the past decade from years of military rulers to a democratic, civilian government.

Tenkorang had to complete another year of service after receiving his bachelor’s degree in 1996, and he chose to add to his academic resume. He earned only a small stipend while doing work for various professors on the university campus.

“My interest changed. Instead of working at a bank, I went into the classroom,” he said. “My interest was that a bachelor’s degree was not enough.” The professors he worked for, including agricultural economists, pushed him to continue his education.

Tenkorang said a college education was free in Ghana when he was a student, but he knew it would be very expensive in the United States, and he would need to be a paid graduate assistant. One school that had such a position was the University of Wyoming.

“When I went to the U.S. Embassy (in Ghana), they asked if I knew where I was going,” Tenkorang said with a smile.

After earning his master’s degree in agricultural economics from Wyoming in 2002, he found a graduate assistant position at Purdue University in Indiana, where he earned his doctorate in 2006. He also worked on research at Purdue, which was completed after he came to UNK in the fall of 2006. The goal was to discover why more farmers were not using new satellite-linked technologies for yield monitors, and precision applications of fertilizer and other crop chemicals.

“The technology was there, but the application by farmers was very low. We wondered why farmers weren’t using the technology,” Tenkorang said. The answer was the cost per acre. As more farmers used the new management tools, the cost of the equipment went down.

He said he uses some examples from his research to teach economic concepts to his students, especially those in the agribusiness classes. Even more of the data he has gathered will be used next spring, when he plans to teach a class specifically about the food-versus-fuel issues.

Much of his research has focused on collecting information from other studies, modeling the data and testing variables. A graduate assistant has helped him at times with the data collection.

One study looked at specific factors influencing ethanol plant location and production capacity, including corn availability, water, cattle and access to a major highway. The study, which involved 122 similar plants throughout the United States, found that corn production was the only statistically significant factor. “I became interested in this because of the (United Nations) fertilizer demand study,” Tenkorang said. “I came here and realized Nebraska was one of the areas I could look at. Do we have enough corn? Why are they (ethanol plants) all in the Midwest?”

Answers to one question always lead to new questions for researchers, he said.

For ethanol, he said, another issue is how to get the fuel from Midwest plants to refineries, and then to East and West Coast states with the highest populations and greatest demand for fuels.

“We cannot use the existing gas pipeline, because ethanol is corrosive,” Tenkorang explained. “So how do we distribute it?”

He said that whenever a researcher does a study with information from other studies, the goal is to take the research to the next step. For example, he is concerned about what new technologies in ethanol production, including the use of alternative crops, would mean to corn farmers.

Tenkorang also has looked at how to make a better, simpler model to accurately forecast crop prices. It would allow farmers to make better production decisions, plan financial activities, and develop marketing plans and risk-reduction strategies. The problem, he and Bridges found, is that much of the key data required to predict prices that was relied on by earlier studies is not available to agricultural producers when they need to make planting decisions.

The two UNK researchers also have compiled data about how changes in U.S. farm policies, starting with the 1996 Farm Bill’s new freedoms to plant various crops, have changed land use decisions. Their October 2008 paper was titled “Multi-Crop Acreage Response to the 1996 Farm Act and Beyond.” Most of Tenkorang’s work thus far has been secondary research. He said there are many issues that can be studied in that way, but he hopes to use Nebraska’s fertile farm country to do his own data collection in the future.

“What I have in mind is to use primary data, go down to farms and primary businesses,” he said. He is already mentoring a student, who is exploring the impact the current recession has had on small businesses in Kearney.

“We want to know who overcame it, and what they did,” Tenkorang said.

The student, an economics major, was in the UNK Undergraduate Research Fellow program. He gathered literature and background information on the topic and has reapplied to the program to continue working with Tenkorang on the research. Tenkorang said that he hopes surveys of business owners can be done this fall and that he can have some data assembled by next May.

And the former city boy from Ghana, whose roots have become firmly planted in Nebraska, will find his research work tied even tighter to Nebraska and Nebraskans.