That morning, like the many mornings before, Kurt Borchard pulled on jeans, an old T-shirt and a worn out, eight-year-old coat before boarding a city bus to the homeless corridor in northern Las Vegas. Tucked inside his coat pockets were a notepad, pen, mini-tape recorder, spare tapes and batteries, and copies of the Informed Consent Statement. All out of sight.

In time, he arrived at the shelter where, like the homeless men surrounding him, he sat and waited along the chain-link fence for the shelter to open. There, he hung out, quietly observing the situation. Waiting. Trying to get up the courage to talk to any of the indigent men nearby. Then, along came a man who was handing out small, lunch box-sized cartons of orange juice to the men gathered there.

“As he tried to hand me a box, I attempted to explain to him that I was not homeless,” said Dr. Borchard, UNK professor of sociology. “I was there to do research on homeless men, and I did not want to take away a nutritious drink from someone there who could truly use it. The way that I was dressed, though, combined with my unlikely story, made him think that I was just being prideful.”

The man was quick to respond: “Yeah, and I’m the president. Come on, man, you think you’re too good to take my juice? If you was really a student, you wouldn’t be out here sitting with all these homeless guys; you’d be sitting in your warm dorm room. Don’t act like you’re above it, like you’re better than us. Now, don’t say anything. Don’t talk. I don’t want no conversation. Just take the damn juice.”

Surprised by the man’s sharp response, as well as his unwillingness to accept the explanation, Dr. Borchard did the only thing he could do, “I took it from him and began drinking.”

Despite the man’s assessment, Dr. Borchard was not homeless. He was, in fact, doing research on homeless men in Las Vegas— research that regularly took him into the heart of the homeless district as he sought to discover how the men he found there became homeless and what kept them homeless. He began the research as a doctoral student at the University of Nevada, Las Vegas and continues the work as a professor of sociology at UNK. 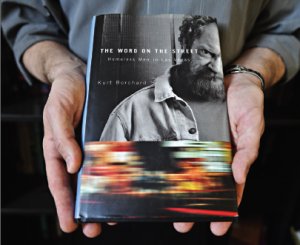 What he has learned became the basis not only for a doctoral dissertation and publications in prestigious academic journals, but also for a book, The Word on the Street: Homeless Men in Las Vegas. The book chronicles the hardships homeless men endure, the proposals city administrators put forth to deal with the homeless, and the ways in which homeless men are portrayed in the media. A second book is in progress. Homelessness is no small issue in Las Vegas; as early as 1999, there were an estimated 6,700 homeless in the city.

Noting that the majority of homeless persons in Las Vegas are men, Dr. Borchard said: “I chose to focus exclusively on homeless males.” He did so, he said, not only to limit the scope of the study, and also because it was easier for him to access shelter facilities for homeless men than it was to access shelters for women.

“Homeless shelters for women in the city also serve as places of refuge for women facing domestic violence,” he said, “I found women’s shelters in Las Vegas had far stricter rules concerning visitors, particularly male visitors, on their property.”

In his research on male homelessness, he conducted in-depth interviews of 48 homeless men and two service providers. All were given Informed Consent Statements to sign and assured that they would remain anonymous.

“The names were changed in my final written work to ensure their confidentiality,” he said. The 48 ranged in ages from their early 20’s to early 60’s, and included Hispanics, African Americans and Caucasians. He made contact with some of them in shelters, some in abandoned buildings and others on the street.

“Of the men I met, one man, Jerry, stands out,” he said. “When I face questions about homelessness, I often think of Jerry and the story of our day together. In the interview, Jerry was open about his thoughts on homelessness and the Las Vegas community’s response to his situation.

“The interview,” Dr. Borchard said, “also shows how homelessness is the result of a complex relationship between the individual homeless man and a social structure.”

In part, Jerry told him: “I came to Las Vegas a year ago…I am homeless. I’m 53, an alcoholic, but I have chronic emphysema. I’m having a hard time breathing. When you get down and out, you can never get back up. You cannot get off the street…In (Las Vegas), it’s bad to be homeless…There’s only one place to go, and that’s down, deeper and deeper and deeper…and you just die out here.”

“Male homelessness can be understood partially as the result of individual problems and choices, and partially as the result of social conditions that exacerbate these problems,” he said. “Although it is clear that Jerry has made some bad life decisions, it also becomes evident that several local institutions failed to assist him with his health problems and his homelessness in a meaningful way, and that his future did not hold much hope. In sum, Jerry reveals that homeless men have a unique understanding of their problems, which we should listen to.”

And Dr. Borchard did. He listened to Jerry and the 47 other homeless men whose stories he recorded in their own words. How they became homeless, their plight, their hopes or hopelessness, their dreams and their nightmares. He listened, and what he heard, he made the focus of his book, which became a finalist for two major awards—the Harry Chapin Media Award and the Association for Humanist Sociology Book Award. The book received a 2006 American Association of University Presses selection award for public secondary school libraries, and today, it is held in more than 400 libraries across the nation as well as in Europe, Asia and Australia.

In a review of the book in Humanity and Society, Corey Dolgon wrote: “The qualities that make Borchard’s book so good—writing and detailed descriptions; rich and moving ethnographies and a keen eye for the humanity of each subject; and the overall depiction of the parts of Vegas that few tourists will see—will be attractive to humanists, scholars and activists. Well organized and insightful, the book should also be very useful for undergraduate courses on homelessness, poverty and urban studies.”

Dr. Borchard was not new to the issues surrounding homelessness when he began his research in Las Vegas. For a time, he had served as the program director for the Men’s Transition Program run by the Salvation Army in Fairbanks, Alaska.

“My work experience at the homeless shelter (in Fairbanks) made me realize that even agencies with good intentions, such as the Salvation Army, neither address the larger reasons behind individuals becoming homeless in the first place nor change how certain perspectives seem to justify homelessness.

“I realized during my time as a director that although I made an immediate impact on a few homeless men, I was not engaging the root causes of their problem. The frustration I felt in Fairbanks in trying to alleviate male homelessness left an impression on me,” he said. As a doctoral student at the University of Nevada, Las Vegas, he turned his attention to male homelessness in the city.

“I soon realized that male homelessness in Las Vegas was very different from what I had encountered in Fairbanks, because of the former’s unique social and cultural environment,” he said.

In Las Vegas, he discovered that there are far more homeless people situated in the city that has been among the fastest-growing metropolitan areas in the nation. Also unique to Las Vegas is an economy based on gaming and entertainment that, in 2000, drew nearly 40 million tourists.

“I have found that homeless men generally like Las Vegas because of its warm climate and its liberal laws that promote hedonism—in other words, for the same reasons many tourists and residents like it,” he said. “Homeless men also initially perceive the city as a place with employment opportunities and excitement, and one where they can get a fresh start.” Instead, the newcomers, who typically arrive with minimal savings, face almost insurmountable roadblocks to finding work.

For example, when a new resort casino opened, there were 50,000 phone calls to the job line for the 1,800 available positions. Only those with union cards were considered. Those wanting to work where liquor is served or there is gambling have to have a sheriff’s card. To get the card, they are photographed, fingerprinted, interviewed and charged a fee. In addition, workers need a voter’s registration card, state ID and a social security card. Once the necessary cards are secured, many often lack reliable transportation, a place to clean up, typed resumes, suitable clothing, contact phone or residential address other than a shelter.

“The range and variety of ways that a particular man became homeless, I found, are as unique and personal as the life story of any individual one meets,” he said.

However, patterns, some labeled “personal vulnerabilities,” did emerge. Among the common problems were addictions, health and physical disabilities, mental illness, loss of regular employment, being recently released from jail or prison, the loss of a family network and rental problems.

Dr. Borchard was quick to note: “This research does not support the idea that the conditions leading to homelessness are reducible to several categories that can then be used to develop social programs that target specific problems at the expense of others. Homelessness is a condition that several thousand individuals in Las Vegas on any given night may share, but often for entirely different reasons.”

“All homeless men in Las Vegas experience a social environment that in significant respects, hinders them from ending their homelessness,” he added, describing the city administration’s approach as “immoral.”

“As the number of homeless males in Las Vegas is likely to increase, I am hopeful that this research will encourage the city to enact a more humane and charitable approach toward homeless men. The city’s future as a popular tourist destination might depend, in part, on its response,” he concluded.