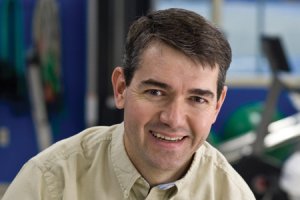 What, if any, are the health benefits of playing Nintendo Wii?

Dr. Greg Brown’s passion for research is fed by these and other questions that he and his students have about one of the newest phenomena of the computer age—the Wii. “I want to be able to answer students’ questions,” said the associate professor of health, physical education, recreation and leisure studies (HPERLS).

Wii (pronounced “we”) is a video game that offers players the virtual experience of playing tennis, boxing in the ring, and a number of other physical activities that normally occur outside or on a large playing field, all while in the comfort of their living room. The games are played using a handheld wireless remote that functions as a pointing device and detects movement in three dimensions. As a result, players actually go through the motions of a full tennis backswing or a deep lean to ski around a corner on a mogul course. A player can compete against another player or the computer.

In this computerized age, Wii has become popular with both children and adults. Couples are nurturing their relationships with some friendly bouts in the Wii boxing ring. Physical therapists are prescribing Wii activity for their patients’ rehabilitation. 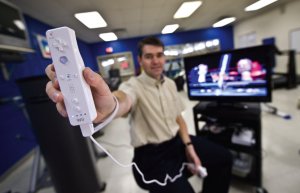 Parents are excited about Wii Fit, a fitness program they can do with their children. And adolescents are perfecting dance moves with Dance Dance Revolution (DDR).

The Wii has players up off of their couches, but are the activities increasing fitness levels? Dr. Brown and his students decided to study the effects of playing Wii on the fitness levels of youth. Specifically, they wanted to test whether Wii activities would significantly increase energy expenditure, and if so, to what extent?

Their first exploration involved the study of 25 typical, energetic children, with an average age of 11 years. The children were evaluated for aerobic fitness and body composition, as well as questioned about their physical activity and use of video games.

“They were all typical children,” Dr. Brown said, “but they represented a good variety in body composition, physical activity and overall fitness.”

These young research subjects were given the assignment to play. And then play some more. They played Wii tennis, boxing and DDR. In DDR, they had to repeat dance step sequences that progressed in length and speed. They also played a more traditional racing video game in which they just pushed buttons with their fingers and thumbs.

The student researchers, working in the UNK Human Performance Laboratory under the guidance of Dr. Brown, evaluated energy expenditure by measuring the children’s heart rate and oxygen consumption while they played. 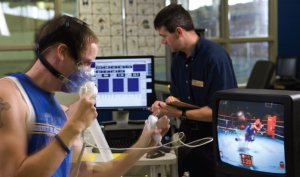 “The initial visual results certainly suggested that Wii-type of activity seemed to have the capacity for physical fitness, because the subjects were moving at levels well beyond, say, the little bit of thumb-pushing required for playing regular video games,” he said. Dr. Brown and his students suspected that DDR, in particular, would be a strenuous workout for the children.

However, their research findings surprised Dr. Brown and his students. For one, physical activity rates didn’t differ much between the DDR and Wii Boxing readings.

“The energy expenditures while playing Wii Boxing and DDR were about threefold higher than the kind of readings we would see in the kids when they were in a resting state or just using a video game controller with buttons,” he said. “However, a threefold increase over resting still does not meet established guidelines for what constitutes health promoting exercise.

“None of the activities we had the kids engage in turned out to be a replacement for conventional forms of exercise like running, biking or playing real sports,” he said. “Rather, the physical benefits of Wii-type activity aren’t much different from those gained from a casual walk with a dog or someone you’re in love with…scientifically speaking of course.”

Since this first research project, subsequent research by Dr. Brown and his students, along with other outside studies, have continued to strongly suggest that Wii-type of play should not be categorized as fulfilling any sort of standards or guidelines for health-improving exercise.

Dr. Brown has presented the findings from his research at a host of professional conferences including that of the American College of Sports Medicine. Furthermore, Dr. Brown and his students have been interviewed as experts by several national print and Internet media, including USA Today, WebMD and a cover story in the August 2008 issue of BioMechanics. The video game research has been well received in the scientific community as well. An abstract titled “Energy Costs of Physically Active Video Gaming in Children: Wii Boxing, Wii Tennis and Dance Dance Revolution” was published in the June 2008 issue of the journal Medicine & Science in Sports & Exercise. Additionally, Dr. Brown’s research was cited as authoritative information on exercise science in the Internet coverage titled “Exergames Get People Off the Couch, Into Fitness; Research on Their True Benefits Is Still Lacking, but Electronic Challenges Do Encourage Movement”: “The disappointing thing is, it’s still not moderate exercising,” said Gregory Brown, (associate) professor of exercise science at the University of Nebraska at Kearney, who has studied energy burned playing video games.

He studied 25 children playing several exergames and regular video games. Played for 30 minutes, Wii Boxing burned 65 calories; Dance Dance Revolution, 63; and Wii Tennis, 57. A regular video game burned 24 calories, just slightly more than sitting. Playing harder can burn more. Brown has even worked up a sweat himself playing Wii Boxing. His bottom line? “I would not recommend these as a replacement for exercise, but they can be a way to become more physically active during the day.” (August 2008, Indiana Star) “Granted, as both boys and girls figure out how a game works, they probably don’t have to move as much, but the physical activity they do employ in this virtual type of video game exercise is much better than just sitting on the couch moving their fingers,” he said. At the same time, he holds, too, that there are surely some benefits to the Wii—socially, mentally and emotionally.

In conclusion, he said: “It’s innovative. It’s fun playing against another person. It’s a whole new way of playing—what’s not cool about that!”