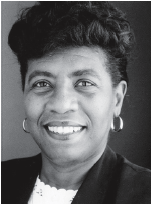 Barbara Johnson, newly appointed vice chancellor for Business and Finance, will become the highest ranking female administrator on campus, and the first to hold that vice chancellor position.

In announcing her appointment, Chancellor Doug Kristensen said, “Barbara Johnson will bring to our campus a wealth of experience in higher education, finance and business.” She will assume her duties in late February.

Johnson began her university career at Florida State University in 1984, where she served as associate director, and then director, of University Business and Financial Services.

In 1990, she became director of the Accounts Payable Division at The Ohio State University, and from 1994 to 1997, she was assistant controller at Ohio State. In 1997, she accepted appointment as vice president for Finance and Administration at Mars Hill (North Carolina) College, where her institution-wide responsibilities included budget development, facilities management, auxiliary services, technology and information services, human resources, purchasing, food services and controller functions.

She became the vice president and treasurer of Carleton College in Northfield, Minn., in 2000. There she was responsible for an $85 million operating budget and a comprehensive administrative services portfolio. She also collaborated with the Board of Trustees in managing a college endowment of $500 million.

In addition, Johnson has extensive experience consulting with universities nationwide on a variety of organizational challenges, including disaster preparedness/recovery, financial management, governing board relationships and operational direction.

She has also been active in national professional organizations and a variety of community service groups.

Before beginning a career in higher education, Johnson held management positions with the Allstate and Prudential insurance companies, as well as with the Florida State Department of Insurance.