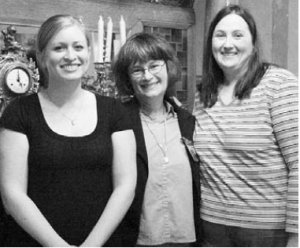 The voices of planners and “doers” from the campus and the Kearney community, as well as music, poetry and the laughter of children, are again being heard inside the walls of the historic G.W. Frank House. KrisAnn Sullivan’s ambitious plans for the mansion are already taking shape this fall. At the same time, the traditional activities are still very much alive.

Sullivan, whose title is director and cultural resource liaison, sees the goals of the house (to preserve, research, interpret, and share) as being in synch with the university’s — learning, scholarship, student development, organizational development, and outreach and engagement.

That potential is being nurtured with her student staffers Sarah Jones, an UNK art history and decorative arts major from Missouri, and Katherine Seizer, a music education major from Kearney. The two are developing and presenting programs during the off-season.

Jones researched the history of the Franks and the Frank House for a series of Saturday afternoon “Frank Talks” this fall. Among her topics have been “Tiffany and Our Window,”“The Lives of George W. Frank and His Family” and “The Early Years of the Kearney Canal.” Each presentation will be available as a podcast on the Frank House Web site in the spring.

“What she has written and presented will be on the Frank House Web site,” Sullivan said. “Even after she’s graduated, her legacy will be here.” 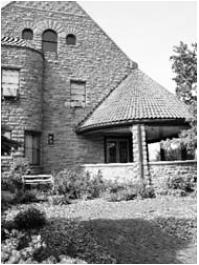 Likewise, Seizer has brought her talents, and her connections to Kearney musicians, to the Frank House for the Parlor Performance Series. She has performed selections on flute that will be featured on her upcoming Senior Recital, and she has arranged for faculty performances as well. In addition, she works about 10 hours a week as records clerk with the Frank House archive program. There she helps transcribe, digitize, organize and preserve the document collection.

“Katherine loves organizing, giving tours and training new docents, as well as bringing in musicians.Her involvement with the Frank House is a win-win situation,” Sullivan said.

Currently, UNK art student Jason Buckner has work on exhibit on the second floor. Earlier this month, he and Justin Stover, UNK student and musician, hosted The SunSet Show late on a Thursday afternoon. Buckner painted, and Stover provided music. Attendance was limited to the first 50 student guests, each admitted for the price of a penny.

A Frank House fun(d)raising activity was included in the show. At the conclusion of the event, students were encouraged to carpool to The Bricks for the Museum of Nebraska Art’s Third Thursday presentation.

“Developing mutually beneficial working relationships with entities with the same interests—culture, tourism, history, preservation—is important to our goal of outreach and engagement,” she said, “which is why it seemed a good fit to link an arts event at the Frank House to MONA’s Third Thursday.”

Sullivan’s goals of “outreach and engagement” are working. At the end of the first week in November, the Frank House already had 78 hours of activities booked for the month.