You are here: Home / Archives for Man of Year 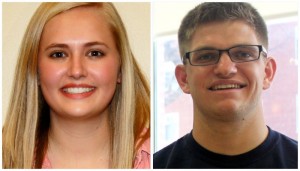 By SARA GIBONEY UNK Communications KEARNEY – Blake Brouilliette and Haley Gunnink are the University of Nebraska at Kearney’s Greek Man and Woman of the Year. Brouilliette, a senior biology major from Hastings, and Gunnink, a senior early childhood education major from Crookston, were announced as Man and Woman of the Year at Thursday night’s Greek Life Awards. A number of other Greek Week honors were presented during the event. The service winner was Sigma Tau … END_OF_DOCUMENT_TOKEN_TO_BE_REPLACED