THURSDAY, May 14 – A long two days traveling to Norway. Here are some glimpses from Omaha and Atlanta, then meeting our bus driver Jan, the beautiful drive from Oslo to Sandefjord, then an awesome surprise welcome from our hosts at HSK. The hot meal at the end of a long trip was fantastic. We’re settling in at Strand and will post photos tomorrow of our practice sessions and of our site-seeing in Sandefjord.

FRIDAY, May 15 – Friday morning’s activities were breakfast (yum) cold fish, meat and cheese; interview by the local newspaper, then trip to Sandefjord where we posed by the whaling sculpture and saw a whaling boat and the huge ferry. Off to rehearsal.

FRIDAY, May 15 – After lunch here in Sandefjord we had rehearsal to put final touches on our performances for Sunday. The Norwegians are excited for May 17, similar to our July 4. The landscape photos are a nice view of Strand Leirstad, where we are staying.

FRIDAY, May 15 – This afternoon we rehearsed with Haukerod Skolekorps, a local marching band. Learned some new tricks for our performance on Sunday and had fun learning a bit of Norwegian language. After dinner we’ll be treated to some entertainment.

SATURDAY, May 16 – Hot off the presses of Sandefjords Blad this morning! 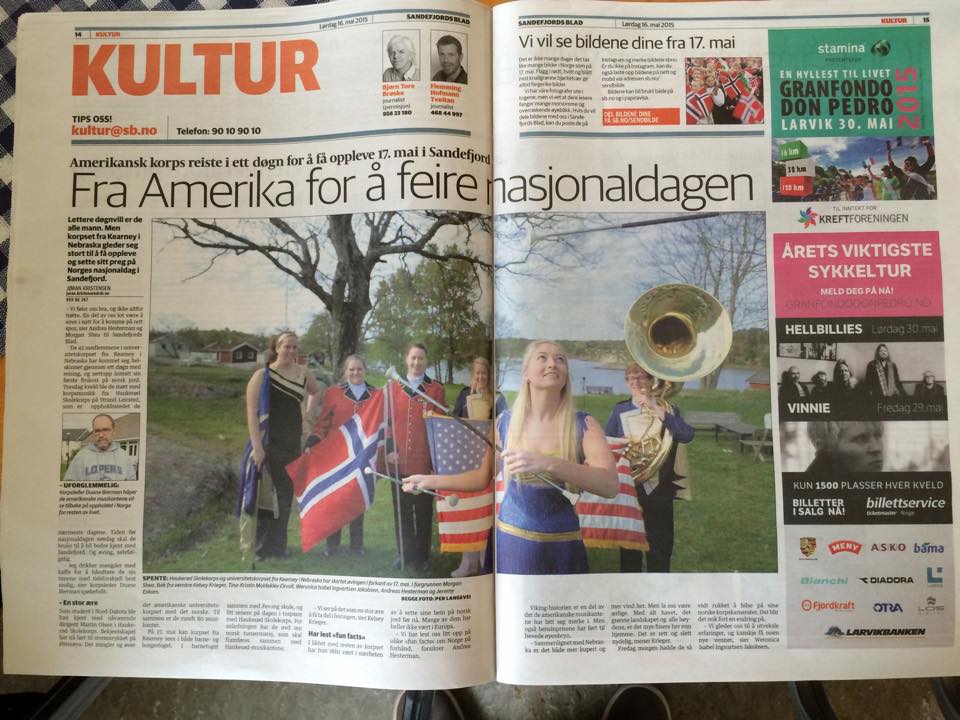 SATURDAY, May 16 – Here’s some photos of last night and our special performance for HSK. We spent time getting to know them, and today, we’re doing more rehearsing. It’s raining now so we’re hopeful it clears up for tomorrow. We had a big day today. Pizza (Chicago, New York, or California) tonight at Peppe’s.

SATURDAY, May 16 – This afternoon after a long day rehearsing we had a special trip to Molen, the site of ancient Viking burial grounds, an international historic place alongside the sea. There are pictures of piles of rocks that contain remains from as far back as the 1200s and the site is eerie in its beauty and reverence. An awe-inspiring experience.

SUNDAY, May 17 – The Pride of the Plains Marching Band entertained the crowds lining the streets for two parades for the independence day celebrations in Sandefjord, Norway on May 17. The Lopers’ marching style is quite different from the traditional marching style, cadence and band song choices, prompting a lot of cheering and murmurs of “UNK” and “Nebraska!” among the crowd of somewhere near 30,000 or more. Everyone in Norway attends a parade; the children march, and everyone gets dressed up in their finest Norwegian attire, including elaborate traditional dresses that have been designed and handed down to the women for generations. There was a flag-raising ceremony at the Hauskerod Skol (school) in the morning, the band marched with the korps (corps) to another flag ceremony at a nursing home (which is tradition), then marched to the children’s parade held first, then attended a concert of the community band, then marched in a longer community parade at 4 p.m. with the Skolkorps. They logged over eight miles marching.

MONDAY, May 18 – On our last day in Norway we toured Kongsberg Moen (the king’s mine), then had lunch at Heddal, the site of one of the few remaining famous Norwegian Stave churches, built in the 1200s. We were treated to some traditional Norwegian folk music by Gunnleff Sletta and some talented dancers, then visited an orchard at Gvarv. Our final activity was a barbecue and scavenger hunt and goodbye with our friends at HSK. Tomorrow at 3 a.m., so-long to Norway!