You are here: Home / Archives for Twyla Hansen 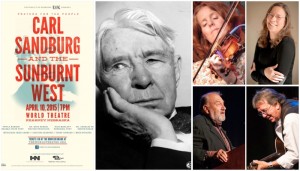 By SARA GIBONEY UNK Communications KEARNEY – “Prayers for the People: Carl Sandburg and the Sunburnt West” aims to keep alive the notion that poetry and music is the core of American culture. Presented by the University of Nebraska at Kearney, “Carl Sandburg and the Sunburnt West” begins at 7 p.m. April 10 at The World Theatre in Kearney. “Sandburg’s poetry is really accessible – his visual and lyrical descriptions of the landscape and his underlying humor,” … END_OF_DOCUMENT_TOKEN_TO_BE_REPLACED