You are here: Home / Archives for Rehearsal for Death 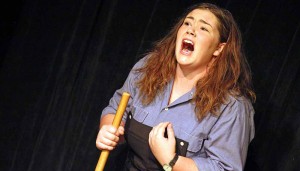 KEARNEY – The University of Nebraska at Kearney Studio Theatre’s production of “Rehearsal for Death” will keep audiences guessing. In “Rehearsal for Death,” written by George Batson, a mysterious letter and a misfired gun turn a play rehearsal into a whodunit. The melodrama has a cast of characters ranging from the “has been” actress to the ingénue, and the local gossip columnist to the stalwart director. “Rehearsal for Death” is at 7:30 p.m. Wednesday through … END_OF_DOCUMENT_TOKEN_TO_BE_REPLACED