You are here: Home / Archives for Nebraska Department of Roads 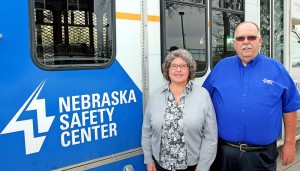 By TODD GOTTULA UNK Communications KEARNEY – The Nebraska Safety Center has received a $639,329 grant to train more than 1,000 transit drivers from transportation, bus and transit companies across Nebraska. The grant, from the Nebraska Department of Roads, is the largest secured in the 36-year history of the Safety Center’s operation in Kearney. The three-year grant is being used to train drivers in defensive driving; passenger awareness, safety and … END_OF_DOCUMENT_TOKEN_TO_BE_REPLACED