KEARNEY – What was once a swimming pool is now a top-notch training facility for one of the best wrestling programs in Division II.

“This facility rivals a lot of Division I programs,” said UNK head wrestling coach Dalton Jensen, whose team is currently ranked No. 2 in the nation.

The previous wrestling room, located on the lower level of the Health and Sports Center since that building opened in 1990, had about 2,900 square feet of mat space. That number is nearly doubled now.

“With 40 guys on the team, it wasn’t possible for us to train efficiently in that old space. We were doing shift practices to accommodate them,” Jensen said. “This new space provides double the square footage for mats, along with the other resources they need to be successful.”

The new facility gives the wrestling program more visibility while keeping the team close to Buckle Court, where the Lopers compete during home matches. By including the athletic training room and workout equipment in the project, it also allows wrestlers to remain with their teammates while undergoing treatment or rehab following an injury.

“Wrestling is a tough sport. It’s a tough thing when you get injured in this sport because it can be just as hard on you mentally as it is physically when you’re removed from the team,” Jensen said. “This facility ensures that no matter where our guys are at in their health, all 40 of them are going to be within that same space at the same time every day.”

In addition to serving current student-athletes, the wrestling facility will be a selling point for future Lopers.

“Obviously this is a huge recruiting tool,” Jensen said. “Kids want nice, new, shiny things, and this space provides that.”

The facility and equipment cost $2.66 million, with $1.91 million coming from private donations. Construction took about 13 months, but the project is several years in the making.

The UNK swim team competed in its final meet on campus in January 2016 and transitioned to the pool at the new Kearney High School that fall. The swimming pool in Cushing Coliseum was decommissioned in 2018, allowing the space to be transformed into a wrestling facility.

“We had a lot of people step up and help us reach this goal, but the main drivers behind this project were Ron and Pam Blessing,” Jensen said. “It would not have moved forward without them.”

A longtime supporter of UNK Athletics and other community organizations, Ron Blessing graduated from Kearney High School in 1967 and attended UNK, known then as Kearney State College, where he earned a bachelor’s degree.

Although he was never officially a member of the Loper wrestling team, Ron got the chance to compete in a match when the head coach needed a replacement for his heavyweight. At that time, students could fill in for physical education credit.

“I think he got pinned right away,” Pam Blessing said with a smile, “but it was just like a little dream for him to be able to wrestle for coach.”

The wrestling facility was another dream for Ron, who passed away on March 2, 2022, less than two weeks before UNK won its fourth team national championship.

“That was a huge loss for our community and our program, so the name behind the facility will have a little more meaning now,” Jensen said. “Ron and Pam have truly been a blessing to our program. Their support over the years, including for this wrestling facility, is so greatly appreciated.”

Ron “always had a passion for wrestling,” according to his wife Pam. “Even later in life when his employees wanted something, he’d make them wrestle for it every now and then,” she said.

At Blessing Construction, the company he founded in 1998, Ron hired employees with a strong work ethic and equally strong character – people who do things the right way – the same values he saw in the UNK wrestling program.

“He would hate it that people are making a big deal out of this,” Pam said. “The recognition is not what he was here for. He just loved the school, the sport and his hometown. He wanted to make this a place UNK can be proud of.”

“I’d give anything if he could see it, and he probably is watching,” she added. “He’s going to keep an eye on these guys and make sure they do the right thing.”

A dedication ceremony for the Ron and Pam Blessing Wrestling Facility will be scheduled later this spring, after the final graphics recognizing donors, alumni and program achievements are complete. The former wrestling room is now being used for athletic department storage.

“I told Ron and Pam over a year ago that I was looking forward to the day when I could walk with them hand in hand through the facility they built and the legacy they left on this program. Unfortunately, Ron passed away last March, but I’m still looking forward to walking Pam through the facility once it is fully complete,” Jensen said. “I know Ron will be watching over us and helping our program continue to build great men.” 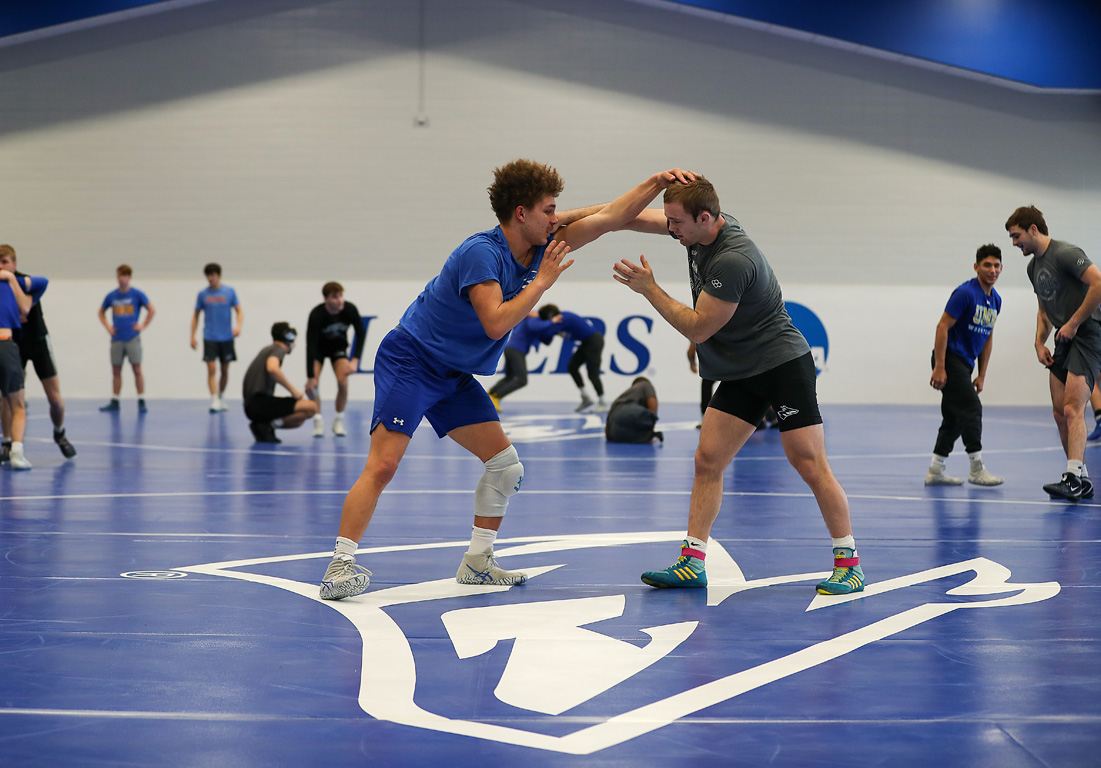