KEARNEY – Brady Bonsall and his wife Sherri aren’t the kind of parents who force their kids to follow in their footsteps.

They were both standout runners at the University of Nebraska-Lincoln, where the couple met as members of the cross country and track teams, but they never pushed their kids to participate in a specific sport.

“We didn’t want them to feel pressured or obligated to do stuff,” said Bonsall, a two-time NCAA Division I championship qualifier in both cross country and track and team captain for the 1996 Husker indoor track team that finished as national runner-up. He competed in the steeplechase at the 1996 and 2000 U.S. Olympic Trials and the 1997 World University Games, and his teaching and coaching career includes time in Lincoln, Broomfield, Colorado, Ogallala and eventually the University of Nebraska at Kearney, where he leads the cross country and track and field programs.

As his children grew up, though, Bonsall was pretty hands-off when it came to athletics.

“He tried to not be the parent who makes you choose running,” said oldest daughter Grace. “We always loved running, but it wasn’t like we were forced to do it.”

“He just wanted us to try a sport,” her younger sister Emma added. “And we tried a lot of sports.”

Naturally, they both gravitated toward running, participating in events for home-schooled children before transitioning to elementary school as fifth graders.

“I liked being good at something where I could beat the guys,” Grace said with a laugh.

Emma enjoys the team aspect and camaraderie. “It’s a sport that pushes me to be a better person in other areas of life,” she said.

As a senior, Grace knew she wanted to compete at the Division II level in college, but UNK wasn’t a lock. She looked at several schools in the Mid-America Intercollegiate Athletics Association (MIAA), and Dad even helped her contact other coaches. He was even happier to help when she informed those coaches of her decision to attend UNK.

“I just wanted to have my dad as a coach,” Grace said. “I know some people wouldn’t want their parent as a coach, but I think it’s pretty neat.”

In her third year at UNK, Grace has established herself as a leader for the Lopers. She finished a team-best fifth at the 2021 MIAA Cross Country Championships at Kearney Country Club, earning all-conference honors and helping the UNK women win their first league title since 1985. Two weeks later, she placed 39th at the NCAA Central Regional meet in Joplin, Missouri, as the UNK women took sixth to tie their best-ever finish at the event.

Grace opened the 2022 cross country season with an eighth-place performance at the Augustana Twilight meet in Sioux Falls, South Dakota, and finished 11th at last weekend’s Greeno/Dirksen Invite in Lincoln. Both events included strong Division I and Division II competition.

She’s been equally impressive in track, with four times inside the top 10 in school history.

Grace gives her father a lot of credit for her success.

“He’s a really great coach. He won’t say it, but he’s a really great coach, so I’ve learned a lot about running from him. That’s a big reason why I’ve improved a lot in college,” she said of Bonsall, who’s in his 16th year as head coach of the UNK cross country program and 15th year leading the track and field teams.

“A lot of people that I know from high school ended up transferring back to UNK because they missed being close to family. So I was like, why transfer when I can just stay here in the first place?” she said.

The freshman Spanish and communication major lives at home with her parents and two younger siblings.

“I’ve had people on the team ask why we don’t carpool to practice,” she said with a smile.

Emma has competed in just two events so far, so she’s still adjusting to life as a collegiate student-athlete.

Perhaps it’s easier to go with Brad, a nickname from the women’s cross country team that combines Brady and Dad and represents his role as a father figure for all the student-athletes.

“He’s kind of the coach/dad for everybody,” Grace said. “Everybody refers to him as the team dad.”

That’s a title Bonsall is more than willing to accept, especially when it comes to his own children. Coaching is “definitely different” when your own kids are involved, he said, but there are far more positives than negatives.

“Honestly, coaching them is probably easier than I expected,” he said. “I really enjoy it. It’s something we can share and do together. There’s this common thing that we do together every day.”

“When I started, I think I was taking for granted that I got to have Dad as a coach,” Emma added. “But now I realize how cool it is.” 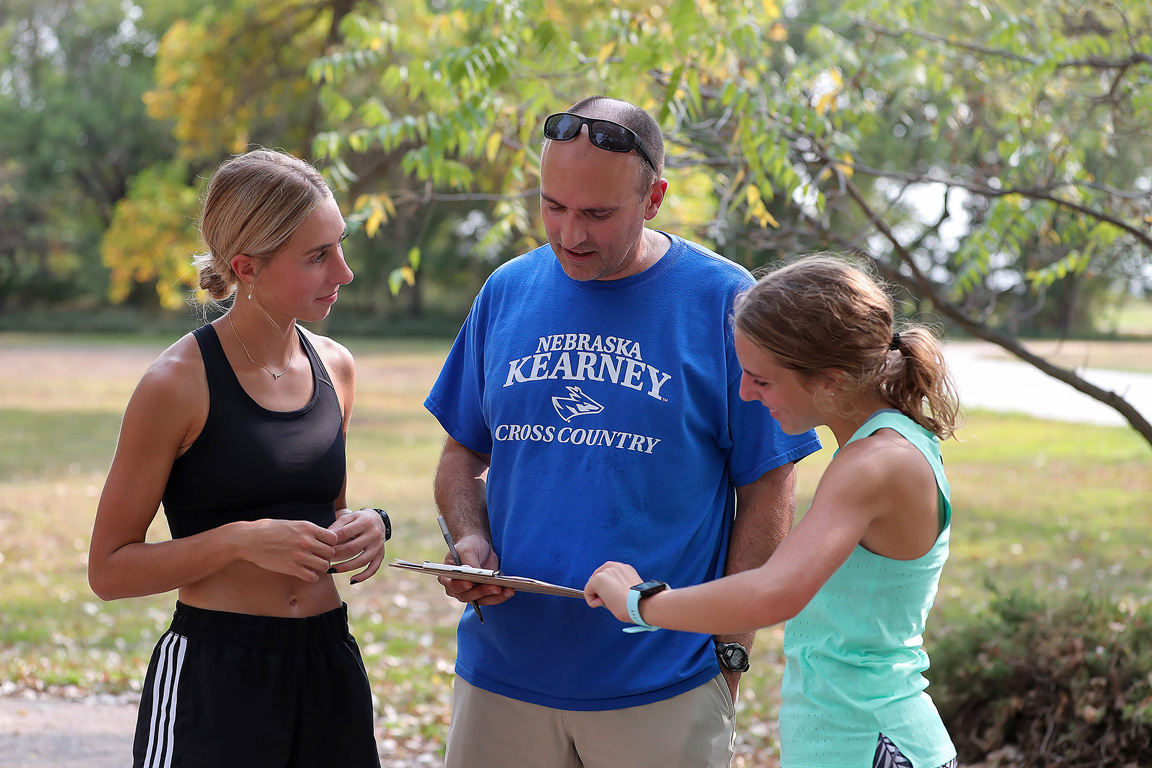 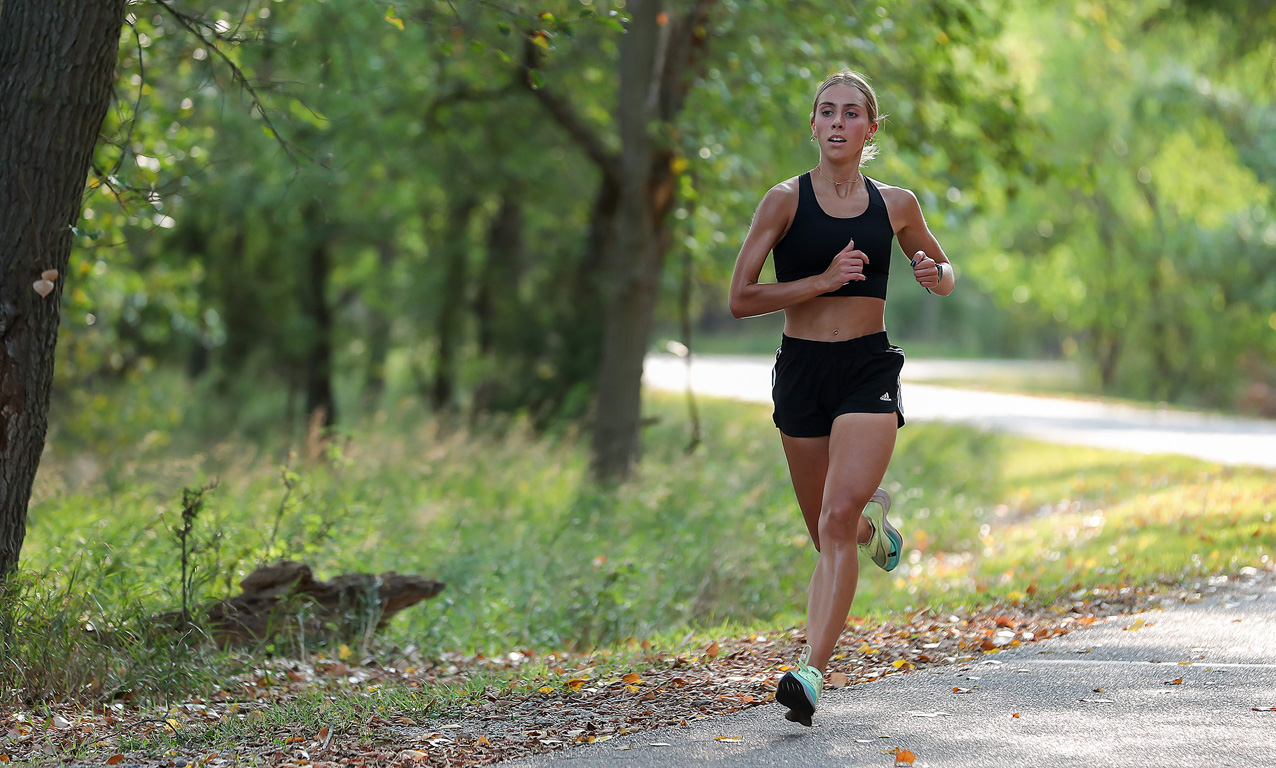 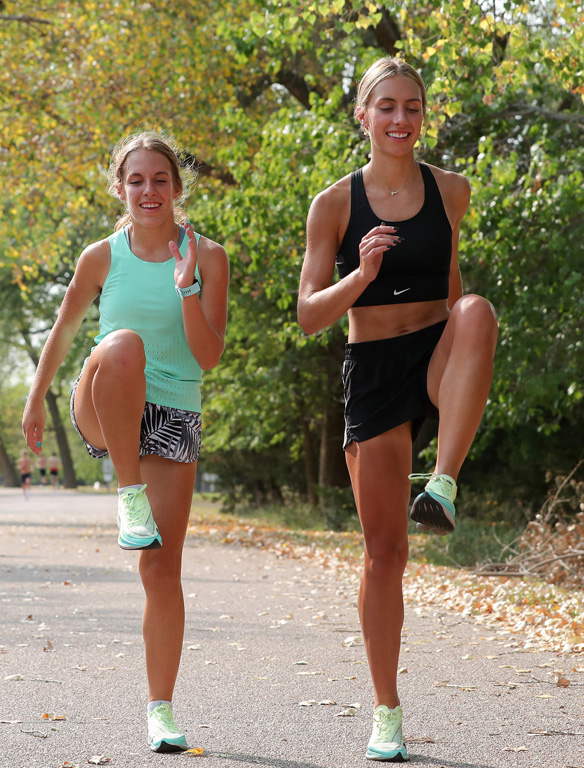