KEARNEY – Me Maw’s face lights up when she thinks about the day her family learned they’d be moving to the United States.

Nearly a decade later, the moment still brings her joy.

The 26-year-old was born in Myanmar, a country ravaged by the world’s longest ongoing civil war. This decades-long ethnic conflict has displaced hundreds of thousands of people, including Me Maw’s family.

From ages 1 to 17, she lived in the Ban Don Yang refugee camp just across the Thailand border, a safe but primitive place for those fleeing the violence back home. They received support from the United Nations Refugee Agency (UNHCR), including monthly food rations, and some of the refugees served as teachers, allowing the children to obtain a basic education in Karen and Burmese.

But nobody was allowed to leave the camp, which was guarded by Thai soldiers. For 16 years, Me Maw and her family lived in limbo, not knowing what would happen next.

“I missed a lot of opportunities,” she said. “If we had a chance to relocate here a little bit earlier, things would have been a lot different.”

In 2005, the Royal Thai Government approved resettlement opportunities for the refugees, who registered through the UNHCR and waited for their names to be selected. Me Maw’s older brother came to the U.S. first, and the rest of the family followed in 2013.

It was both exciting and scary.

“We just heard America, but we didn’t know exactly what it would look like or how people lived there,” Me Maw said. “My whole life I grew up in a refugee camp. What’s it going to be like in another country?”

The family’s first stop was Garden City, Kansas, where Me Maw enrolled in high school as a 17-year-old freshman.

“My parents wanted us to be educated,” she said.

However, communication was difficult since she only knew a few words in English. Me Maw started in an English as a second language program, and the family leaned heavily on her older brother and a refugee resettlement agency during the transition.

“It was really challenging,” she said.

In 2015, the family moved to Omaha, where Me Maw attended Central High School and her father began working in a meatpacking plant.

All four siblings and their parents have shared a residence in Cozad since 2017, when Me Maw graduated from high school and enrolled at the University of Nebraska at Kearney.

For the past five years, Me Maw drove back and forth from Cozad to Kearney to save money on housing. She also had a part-time job at Tyson Foods in Lexington, where her father works, while studying as a full-time student.

“It wasn’t easy at all. It was really, really hard. I struggled a lot,” said Me Maw, who almost dropped out her junior year.

“Because of my professors and my family, they encouraged me, so I finished,” she added before pausing to wipe the tears from her eyes.

The support from her family was a “huge part” of her success, she said. Me Maw also received assistance on campus through the UNK Learning Commons, her classmates and some “really, really helpful” professors in the social work program.

“They always wanted what was best for me,” she said. “They focused on my skills, rather than my weaknesses.”

She was especially inspired by Maha Younes, an Arab Christian who grew up in a Palestinian family living in Israel. Like Me Maw, she moved to the U.S. at age 17 and attended UNK, earning degrees in social work and psychology. Younes went on to receive master’s degrees in educational psychology from UNK and social work from the University of Nebraska at Omaha, as well as a doctorate in adult and community education from the University of Nebraska-Lincoln.

Younes, a social work professor and chief diversity officer at UNK, is equally inspired by Me Maw’s achievements.

“When we think about hardship, we don’t think about having to flee your country at a young age, living in a refugee camp and immigrating across the world without language skills or support systems,” she said. “Me Maw’s accomplishments exemplify the resilience of the human spirit and serve as proof that with proper support those who are most marginalized hold great promise and make many contributions.

“She fought hard for everything, every step of the way. She never felt sorry for herself, never complained, never asked for exceptions and approached every situation with openness and grace. Her success shows that when faculty engage in supporting students, all things are possible and our American dream is alive and well.”

Me Maw graduated last week with a bachelor’s degree in social work, becoming the first member of her family to complete college.

Her parents and siblings were there to watch as she received her diploma inside the Health and Sports Center.

“It’s an exciting moment,” she said. “It means a lot to me and also to my parents.”

Me Maw just accepted a job with Wildrose Home Care in Marshall, Minnesota, where she’ll assist other Karen and Burmese refugees.

“I want to help people,” she said. “I saw my parents struggle, so I know they need someone who can speak for them.”

Younes is confident she’ll make a positive impact throughout her professional career.

“Me Maw’s language skills fortified with social work knowledge make her a rare commodity for refugee empowerment centers and agencies,” Younes said. “She’ll be an asset in any setting.” 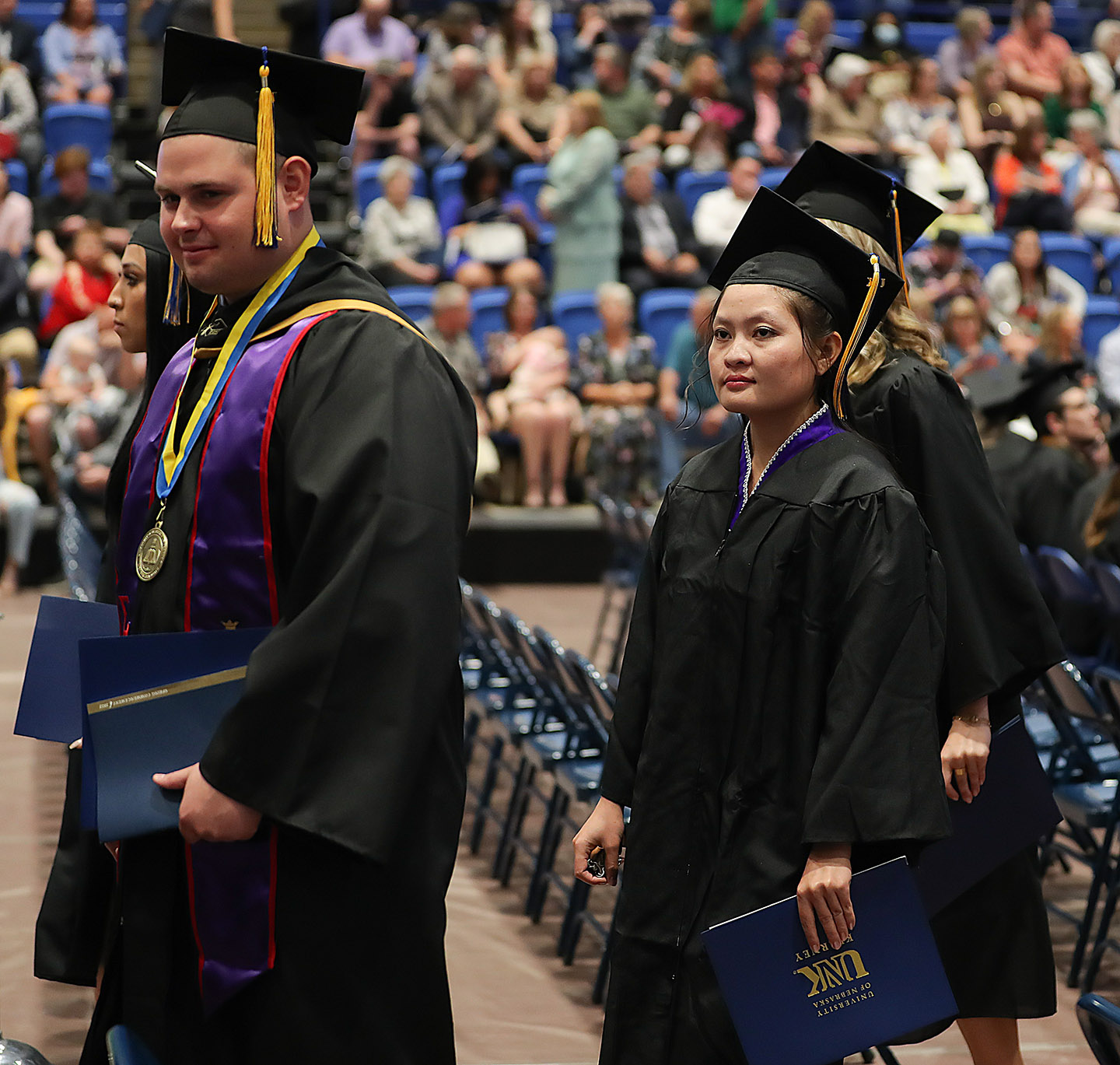