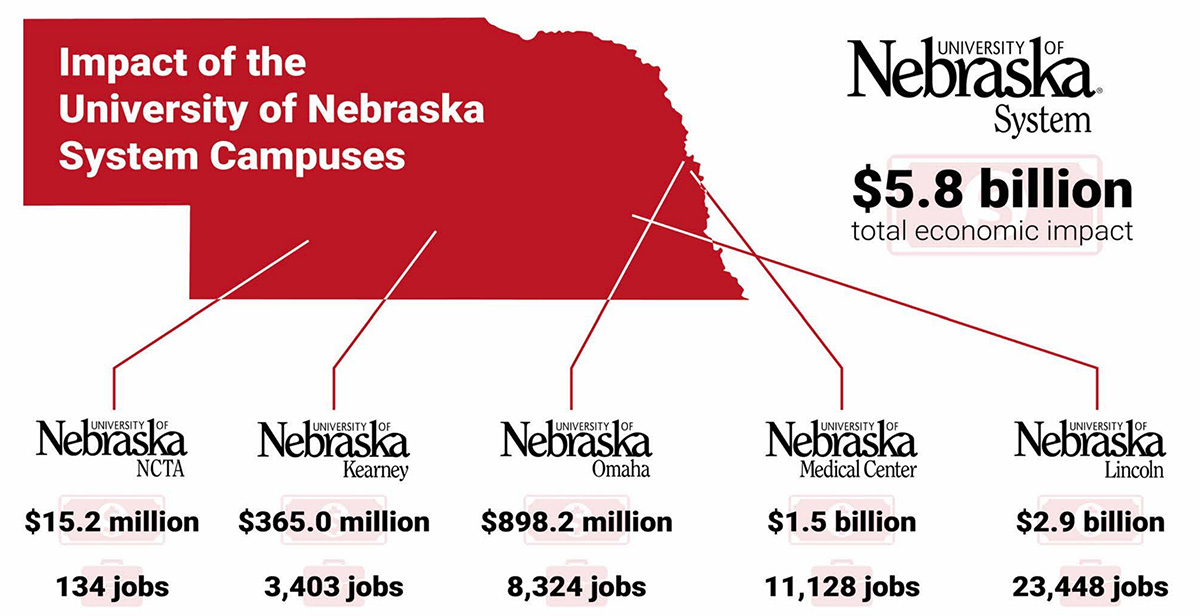 The teaching, research and outreach activities of the University of Nebraska grow the state’s economy by $5.8 billion every year, according to an independent new analysis of the NU System’s significant and far-reaching impact on Nebraska’s prosperity and quality of life.

The analysis, unveiled Friday to the Board of Regents, was conducted by Tripp Umbach, a national consultant with expertise in economic impact studies. Tripp Umbach’s findings, which detail the university’s impact by campus, region and legislative district, show the NU System generates $9 for every $1 the state invests – a significant increase from the 7-to-1 ROI the university created in 2019.

That all four campuses grew their impact even while managing the challenges of COVID-19 is evidence of the vital role the university plays in maintaining the economic competitiveness and well-being of the state, NU System President Ted Carter said.

And as Nebraska recovers from the pandemic – and faces an urgent workforce challenge of 50,000-plus open jobs, including critical openings in health care and STEM fields – an affordable, accessible, competitive public university will continue to be a key part of the solution, Carter said.

“This new analysis is the latest confirmation that the University of Nebraska is one of the largest drivers of economic and individual growth in our state,” he said.

“The numbers alone are powerful, demonstrating the remarkable return we provide on Nebraskans’ investment. When we factor in the cutting-edge research we conduct to improve lives around the world, the outreach we perform in every corner of the state, and the transformational education we provide to 52,000 students every year, it’s clear that the state of Nebraska cannot prosper without its public university.”

‘An impressive result for taxpayers’

Sen. John Stinner of Gering, chairman of the Legislature’s Appropriations Committee, said: “A 9-to-1 return on investment is an impressive result for Nebraska taxpayers. From my chair, the University of Nebraska has been a responsible and forward-thinking steward of its resources. These findings demonstrate that the University of Nebraska has been able to turn Nebraskans’ investment into impact that extends to every corner of the state – rural and urban alike, from my district in western Nebraska all the way east.”

“The takeaway from this report couldn’t be any more clear: Investment in higher education pays off big-time for the state of Nebraska. Not only does the University of Nebraska turn every dollar it receives into growth for the state, but it transforms the lives of our next generation of leaders in so many ways that we can’t fully quantify,” said Sen. Lynne Walz of Fremont, chairwoman of the Legislature’s Education Committee. “I’m very pleased to see this latest evidence of the remarkable ripple effect that investment in education creates for Nebraska.”

Mark McHargue, president of the Nebraska Farm Bureau Federation, said: “When it comes to our state’s most important industry, agriculture, the University of Nebraska is an invaluable partner. The university provides innovative research to support our farmers and ranchers, educates the agricultural workforce of the future, and serves families in every county through Extension and outreach. We are fortunate to have a partner whose investment in agriculture is helping grow our state.”

Said Bryan Slone, president of the Nebraska Chamber of Commerce and Industry: “Workforce is our generational challenge. We all need to work together to bring solutions, but no single entity in the state brings the scale and scope of the University of Nebraska. We know intuitively, and this report confirms, that a strong and growing university is vital to building the workforce Nebraska needs to stay competitive.” 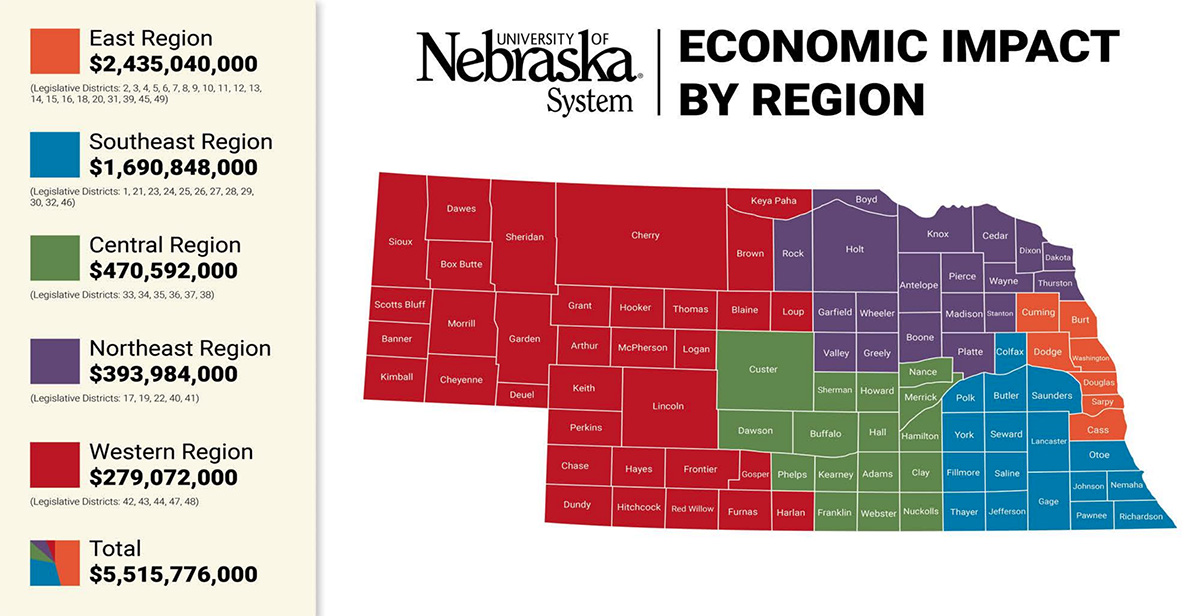 Annual economic impacts by campus are as follows. Figures do not include Nebraska Medicine and its affiliates.

The full, detailed report from Tripp Umbach is available at www.nebraska.edu/economicimpact.