KEARNEY – If you’re looking for Josh Blaesi, he’s not hard to find.

The University of Nebraska at Kearney senior spends most of his time on campus inside two buildings – Bruner Hall of Science and Calvin T. Ryan Library. He’s the 31-year-old with a full beard.

Blaesi is a military veteran and future veterinarian, a combination that explains his organized, goal-oriented approach to academics.

“When I came back to school at 28, I knew what I was coming back for,” he said. “I was a lot more focused and motivated.”

A decade earlier, Blaesi didn’t have that same sense of direction.

After graduating from Gretna High School, he enrolled at the University of Nebraska-Lincoln, but never felt connected to the campus or classes.

“It just wasn’t the educational experience I was expecting,” said Blaesi, who grew up in the North Platte area.

His parents wanted him to become a doctor. He wanted to join the military, following in the footsteps of his father and grandfather, both U.S. Army veterans who served in the Gulf War and Vietnam War, respectively.

“The military was better for me at the time, so I joined,” he said.

Knowing he would return to college down the road, Blaesi decided to enlist in the Army Reserve, allowing him to serve overseas during the war in Afghanistan.

The military police officer completed three deployments, totaling about 30 months, during his nearly 10 years in the Army Reserve.

His first assignment was protecting a power plant that provided electricity for Kandahar and surrounding areas in southern Afghanistan. Following that mission, he completed the Protective Services Training Course, a specialized program for military personnel who provide security for executive-level Department of Defense leaders.

“It’s a rare opportunity to get that training, and it led to some really cool experiences,” he said.

Essentially, Blaesi served as a bodyguard for the top generals commanding the U.S. and NATO forces in Afghanistan. He escorted them to high-level meetings, scouted transportation routes to identify any potential threats and even drove a limo.

“You’re basically a fly on the wall,” said Blaesi, who was stationed in Mogadishu, Somalia, for his last mission, a protective services operation for a brigadier general.

Blaesi returned from his final deployment in May 2018 and started classes at UNK that fall. After shadowing Dr. Kira Kautz, the owner of Westfield Small Animal Clinic in North Platte, he had a new life plan.

“I realized I could combine my passion for animals and medicine,” he said. “I knew veterinary medicine is what I wanted to pursue, so I decided not to reenlist and was definitely focused on school.”

A biology major in UNK’s pre-veterinary medicine program, Blaesi receives educational benefits through the Post-9/11 GI Bill, which covers 100% of his tuition and fees. UNK Military and Veterans Services, led by Assistant Director Lori Skarka, has been an invaluable resource, as well. That’s where he gets help with all the VA paperwork and other issues.

“I’ve been in Lori’s office quite a bit, and there are a lot of times when I just go in there to talk,” Blaesi said. “She has helped me a ton.”

Using the confidence, flexibility and professionalism he gained from his military service, Blaesi is a dean’s list student who balances his coursework with a part-time job at Kearney Regional Airport and an internship at Hilltop Pet Clinic in Kearney.

He’ll graduate from UNK in May, with hopes of beginning veterinary school next fall.

“I’ve really enjoyed my time here at UNK,” Blaesi said. “It’s allowed me to pursue a career I’ll enjoy for the rest of my life.” 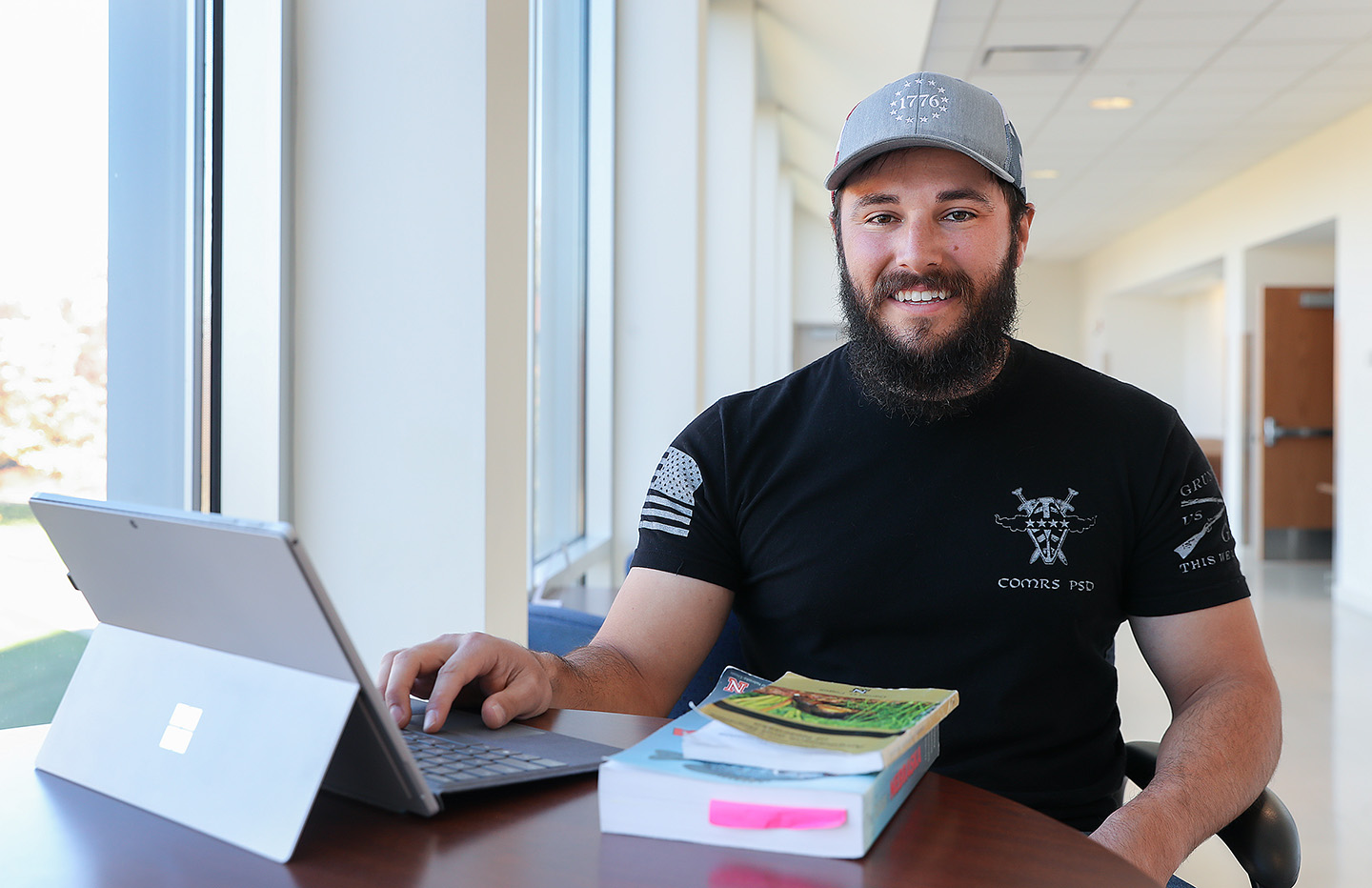