Dave Lerbakken thinks so, and the judges at Wednesday night’s Big Idea Kearney event agreed with him.

The local musician claimed the top prize in the community division of the “Shark Tank”-style competition with a business model that combines suds and songs.

Guitar in a Bar is his way of making it a lot more fun and far less stressful to learn an instrument.

“This was always in the making because I’ve seen people do group lessons, but it was always just sitting in a circle in a boring room,” Lerbakken said. “I just thought, ‘How can I make this a little bit more sociable?’”

The answer was actually pretty simple. In early 2020, he partnered with McCue’s Nebraska Taproom in downtown Kearney to offer group guitar lessons in a laid-back environment where participants can enjoy a beer while learning to play songs by artists such as Bruce Springsteen, Creedence Clearwater Revival and the Beatles. 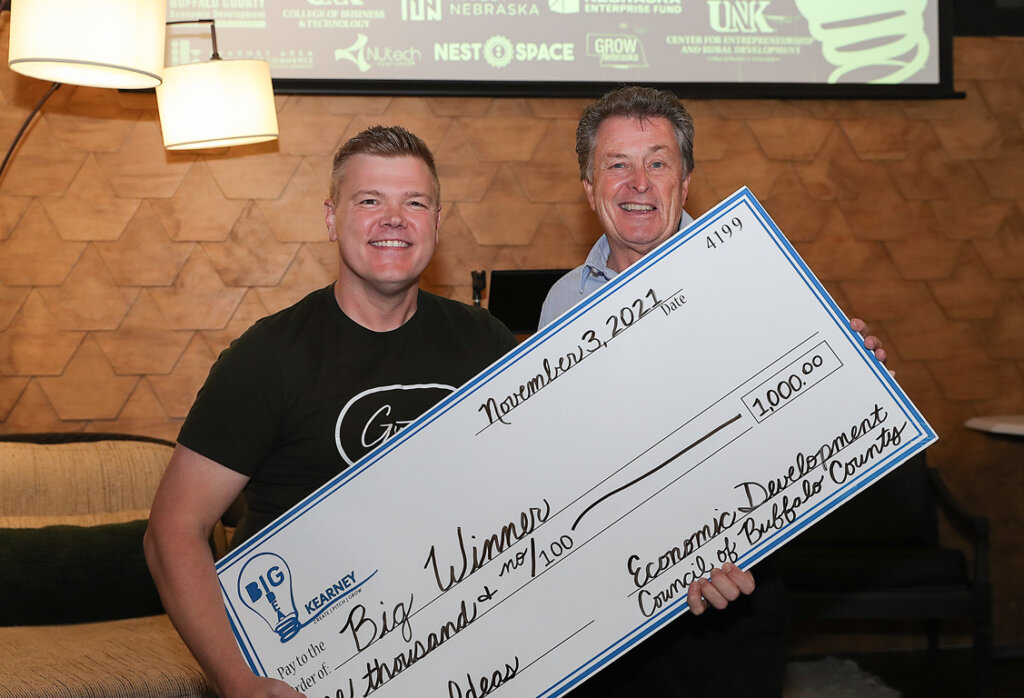 “It had great response out of the gate,” said Lerbakken, who limits each session to about 10 participants and simplifies the instruction so beginners remain engaged. More advanced classes are also available, with the full list of options outlined at guitarinabar.com.

Lerbakken, who charges $60 for four weekly sessions, views the business as a win-win-win. He makes money while helping grow the local music community and the bar profits by selling a few extra drinks on a slower weeknight.

By winning Big Idea Kearney, the annual business pitch competition organized by the University of Nebraska at Kearney’s Center for Entrepreneurship and Rural Development, he now has an extra $1,000 to grow his concept. The UNK graduate hopes to bring Guitar in a Bar to new markets through franchise agreements.

“I haven’t seen anybody else do this locally, or even in surrounding states,” said Lerbakken, who teaches private lessons at Yandas Music, performs as a solo act and plays in the popular cover band The Innocence.

He’s been a professional musician for more than 20 years, putting that music business degree to good use.

“I’ve always looked back fondly at the music program at UNK,” he said. “It continues to pay off with every endeavor I do.”

A total of 42 people submitted their best business or product ideas for the 10th edition of Big Idea Kearney, which promotes entrepreneurship across central Nebraska. Twenty finalists – split between the community and college divisions – presented Wednesday night during the live event at Nest:Space, a coworking space in downtown Kearney.

The field of finalists was narrowed by a panel of judges before the roughly 150 people in attendance voted on the winners, who received $1,000 for first place, $500 for second and $250 for third in each division.

Lisa Tschauner, director of UNK’s Center for Entrepreneurship and Rural Development, called the celebration of innovation “one of my favorite days of the year.”

“The opportunity to bring together nascent business owners, service providers and funders and expose the audience to this type of energy around entrepreneurship is incredibly valuable,” she said. “This type of event empowers people to pursue the ideas that could someday become the startups that bring value to the Kearney area and our state.”

Well, it was actually his wife Jocelyn’s idea.

“But I’m much more of a people person,” Blythe said. “I love to talk to groups. We’re a very good team. I do this part and she does the smart part.”

Their product, Grate, was born from frustrations at home. The rural Overton couple grew tired of watching their children halfheartedly wash their hands with foaming soap that immediately rinsed away.

Blythe wondered: Why can’t we use a bar of soap like the good old days?

Because his wife didn’t want the mess.

The compromise is a dispenser that contains a bar of soap and a mechanism that shreds it like cheese. When a user slides the grater, they get flakes of soap that “make you work for the lather.” 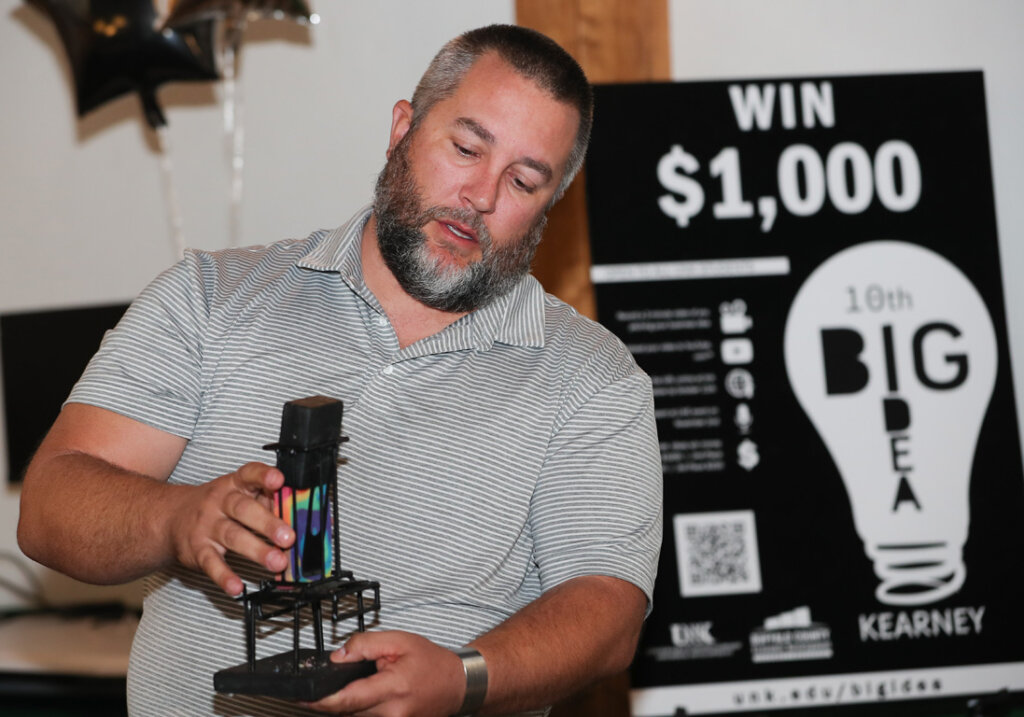 Along with reducing the amount of wasted product, Blythe noted that using bars of soap is significantly cheaper and more environmentally friendly than purchasing plastic bottles.

With a patent pending, they recently promoted their product at the National Hardware Show in Las Vegas.

“It went really well. I’ve had some big box stores that are very interested,” said Blythe, a UNK senior studying geography-GIS with a biology minor.

Blythe and his wife are currently working with an engineer to make “a few tweaks” before they send the prototype out for testing. They haven’t decided whether to license the product or sell it themselves.

“I have a lot of people who have expressed interest in wanting it already,” said Blythe, who expects each Grate to retail for $30 to $50.

In addition to the cash prizes, each winner received a membership to Nest:Space and the first-place finishers were awarded one-year memberships to GROW Nebraska and the chamber of commerce.

Other winners from the competition are: 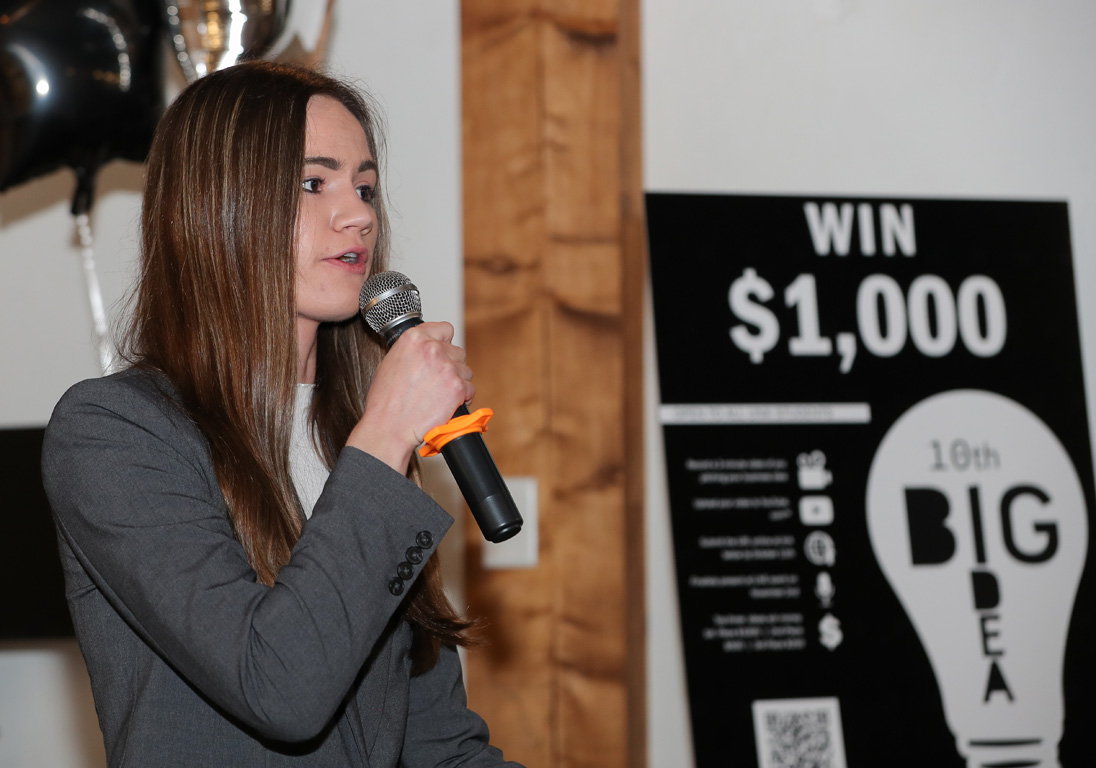 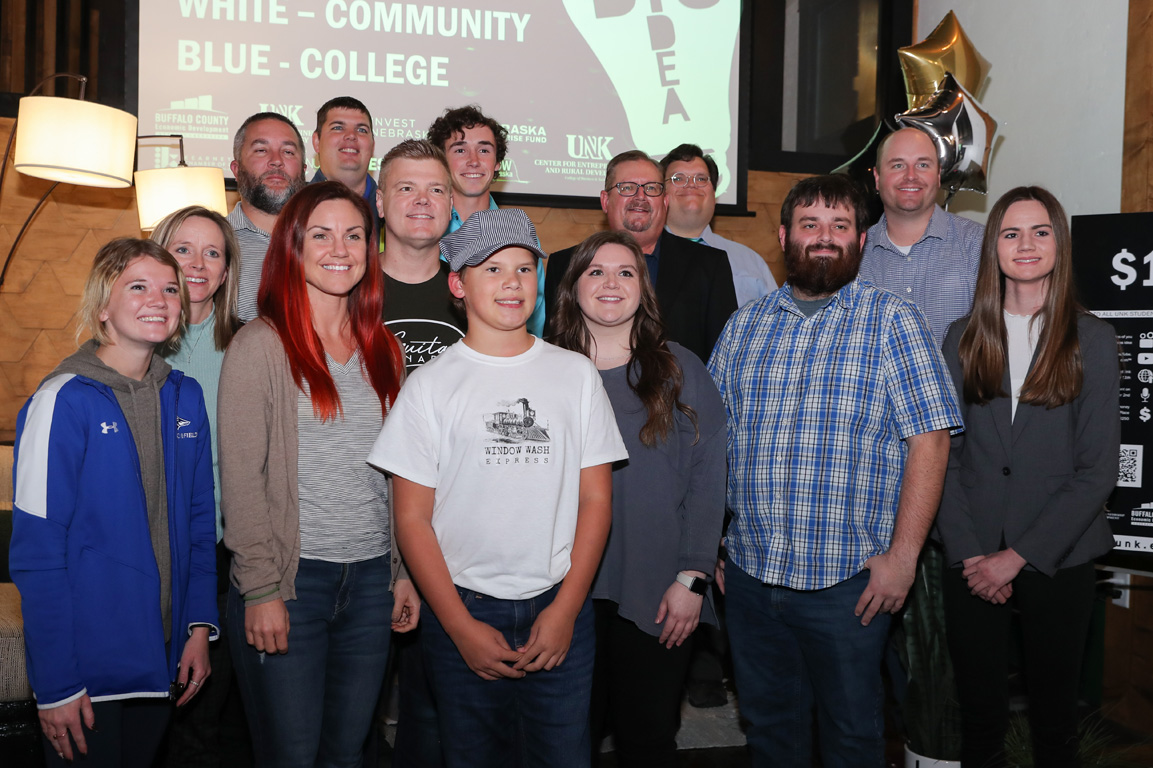