Those are some of the words associate sociology professor Sandra Loughrin uses to describe the women’s, gender and ethnic studies program at the University of Nebraska at Kearney.

As both an instructor and the program’s director, Loughrin wants students to examine the world from a different perspective, one that challenges preconceived notions and creates a better understanding of society as a whole.

“Students are ready,” she said. “They want to have these conversations. It’s just amazing how much they really want to understand the human experience from all perspectives.”

Loughrin, who was appointed to the director position in March, is the first female minority to lead the women’s, gender and ethnic studies program. It’s a distinction she doesn’t take lightly.

“When I took this position, I felt like I could be somebody who students, particularly minority students, can look at and say, ‘Well, that’s somebody who has obtained this in their life,’” Loughrin said.

Not that long ago, Loughrin was an undergraduate student struggling to fit in. 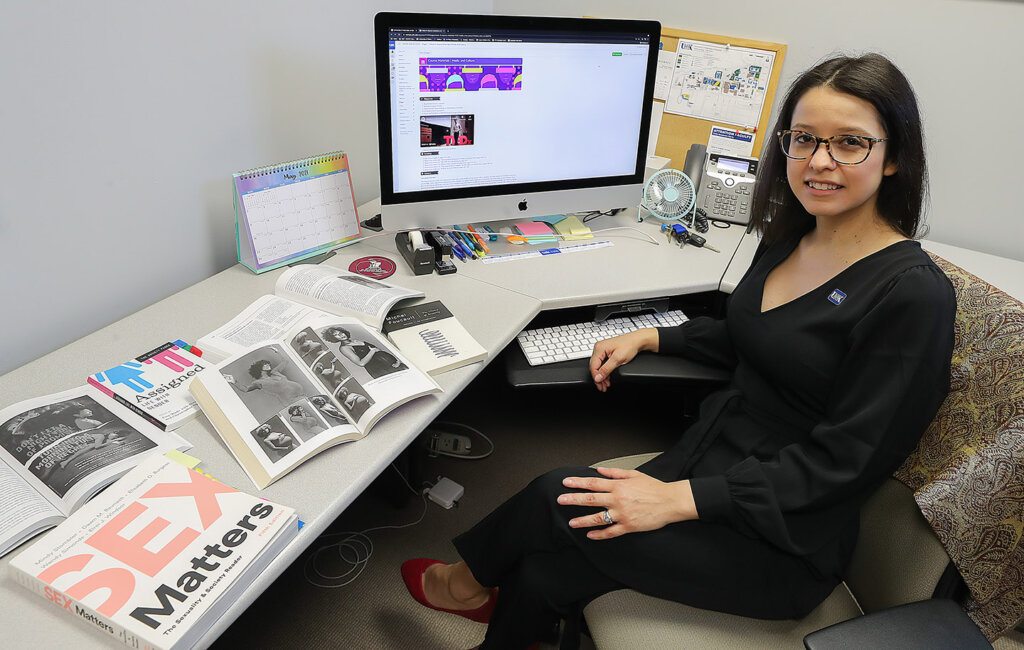 The 40-year-old grew up in Gilroy, California, an agricultural community in the San Francisco Bay Area with a current population of nearly 60,000. Her late father Jose Luis immigrated to the U.S. from Mexico, becoming a citizen in the 1980s, and her mother Minerva was born in south Texas.

After high school, Loughrin attended the University of California, Berkeley, where her introductory courses all had at least 600 students in them.

“There was never really any one-on-one interaction with professors,” she said. “There was no possibility, in my mind, of doing research. I felt very detached, particularly as a first-generation college student. There were many times when I just didn’t feel like I belonged on that campus, especially in my freshman year.”

Loughrin graduated from UC Berkeley with a bachelor’s degree in sociology before continuing her education at the University of California, Riverside, where she earned a master’s degree and doctorate with an emphasis in gender, sexuality and family studies.

A UNK faculty member since fall 2013, Loughrin believes her Chicana background will benefit the women’s, gender and ethnic studies program.

“A lot of the things we talk about are things I’ve experienced in my life,” she said.

Women’s, gender and ethnic studies are interdisciplinary minor degree programs that focus on issues of diversity and equality. Both programs – women’s and gender studies and ethnic studies – promote an awareness of intersectionality and social injustice, as well as the need to create a society free of discrimination, harassment and violence.

“We’re looking at ways to promote equality and to understand people and their experiences,” Loughrin said. “It isn’t just thinking about one specific group of people. It really is thinking about the experiences of everybody so everybody has empathy for one another.”

This is extremely important in an increasingly diverse world, according to Loughrin. Businesses, schools, hospitals and other organizations are looking for employees with cultural awareness, she said, whether they’re future college graduates or people already in the workforce.

“The future of this program is to target both groups – people who are looking to understand this new, diverse social world that we’re working toward and how they can interact with other people,” said Loughrin, whose ultimate goal is to see the program offered as a major or graduate certificate.