KEARNEY – Ryan Sikes is a completely different person than he was five years ago.

Yet, at the same time, he’s exactly who he’s always been.

The 18-year-old University of Nebraska at Kearney student no longer feels “hurt” and “cheated” – the emotions that often overwhelmed him before he came out in middle school. Now, he’s happy, confident and proud to be a transgender man.

“I’ve always known I was a boy and a man,” Sikes said, “but I wasn’t able to put words to it until I learned the term transgender.”

For Sikes and other members of the LGBTQIA+ community, being themselves can be difficult. 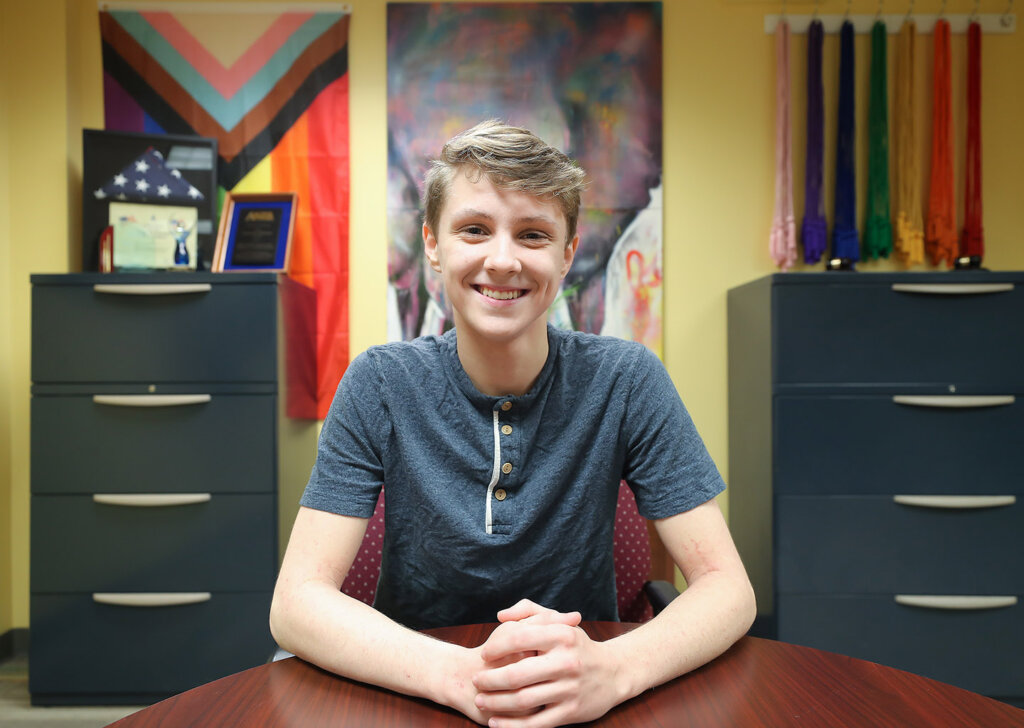 Most people don’t think twice about his gender identity now, but that wasn’t the case when Sikes was younger. He knew he was a male trapped inside a female’s body; however, the rest of the world didn’t see him that way.

“It’s really easy when you’re struggling as a trans person to hate yourself, push everybody away and just assume everybody hates you, too,” he said. “Before I came out, my relationship with my parents wasn’t that great, because I was just kind of waiting around for the worst possible scenario.”

Even though his older brother is gay, Sikes admits that breaking the news to his father was “probably the hardest thing I’ve ever done.” But the result was freeing.

“I knew that for my happiness and for my well-being and for my relationship with my parents, I had to be Ryan,” he said.

With support from his family and one of his teachers, Sikes transitioned at age 14. Although it came with literal bumps and bruises – he was beat up after being outed at school – the moment changed his life for the better.

“It was really empowering,” Sikes said. “I was the first person in my class to come out as anything. I was the trailblazer.”

Sikes, who is bisexual, entered Kearney High School with a new mindset: “This is my life and I’m going to do what I need to do to make my life happy and fulfilling.”

He was involved in several activities and organizations at KHS, including one-act play production, speech, marching band, National Honor Society and Gender Sexuality Alliance, a student-run club that brings LGBTQIA+ and allied youths together to create a support system and address issues in their school and community.

That’s also when Sikes started attending UNK events with his older brother and boyfriend. He was introduced to PRISM (formerly Queer Straight Alliance), a campus organization that promotes awareness of the LGBTQIA+ community and provides a safe, welcoming space for these students and their allies. 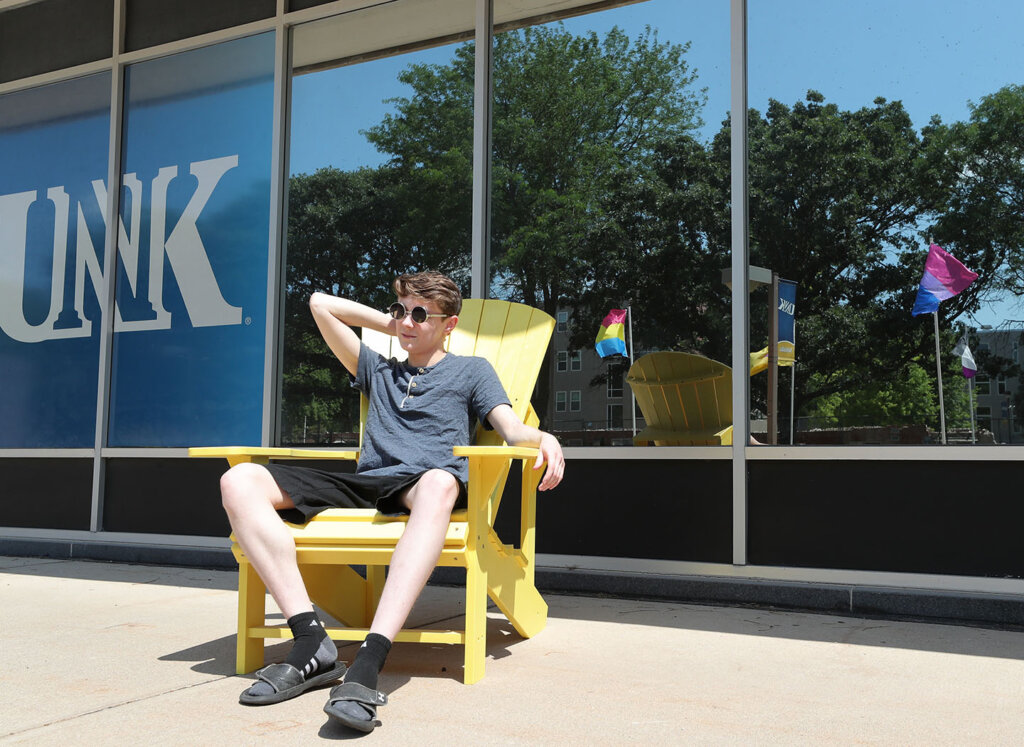 Sikes met other members of the LGBTQIA+ community through PRISM and developed another support system.

“I knew UNK was a safe space,” he said. “That was really encouraging and inspiring, and it helped me figure out what I wanted to do with my life.”

This connection also led to a scholarship offer that was too good to pass up. Sikes received the Multicultural Community Service Scholarship from UNK’s Office of Student Diversity and Inclusion, an award that covers tuition for up to four years.

Now a sophomore at UNK, Sikes is an advocate for himself and other LGBTQIA+ students. He serves as president of PRISM, an organization he hopes to grow in both size and prominence.

“I think it’s so important,” he said of the group. “LGBTQIA+ is a huge acronym and that’s a huge umbrella that covers a huge number of people. There are LGBTQIA+ people throughout this campus and we can’t just ignore that. We have to acknowledge that those students exist. And I think just acknowledging and respecting them makes a huge difference.”

Part of the Office of Student Diversity and Inclusion, PRISM creates a sense of belonging for LGBTQIA+ students and educates the entire campus through events and activities such as the annual Drag Showcase and Queer Prom. The organization also networks with other LGBTQIA+ groups across the state.

Sikes wants PRISM to be an “oasis” where LGBTQIA+ students are fully represented.

“I want people to feel welcome and I want to be much more present on campus,” he said.

Even if you don’t attend PRISM meetings or events, the art education major says it’s pretty easy to be an ally and supporter.

“Just be nice and respectful. The golden rule, you know. Treat others the way you’d like to be treated. You don’t have to agree with someone 100% to support them. I think the first step is respect.”

PRISM meets at 7 p.m. Thursdays during the school year in the Office of Student Diversity and Inclusion on the first floor of the Nebraskan Student Union. The organization is open to any UNK student.

Additional support for LGBTQIA+ students is available through the Gender and Sexuality Resource Office.

The Office of Student Diversity and Inclusion is celebrating Pride Month with a campus cookout scheduled for noon Friday (June 18) at Cope Fountain. The free event includes food, drinks and yard games. All UNK students, staff and faculty are invited to attend.