KEARNEY – Pete and Jane Kotsiopulos aren’t the type of people who expect recognition for their contributions to the Kearney community and state of Nebraska.

It’s quite the opposite.

Jane actually gets a little embarrassed by the attention they receive.

“There are so many people who are worthy of these awards – and here we are again,” she said. “It’s very, very humbling.”

The couple’s most recent honor came during Friday’s spring commencement ceremony at the University of Nebraska at Kearney, where they received the Ron and Carol Cope Cornerstone of Excellence Award. Established in 2003, the award is presented to individuals in recognition of their community service and support of UNK, the Kearney area, state of Nebraska and higher education. It is UNK’s highest honor.

“Like the Copes, after whom the award is named, the recipients must be true cornerstones of our university,” said UNK Chancellor Doug Kristensen, who called the Kotsiopuloses consummate Kearney and UNK supporters.

“There aren’t many other couples like Pete and Jane Kotsiopulos,” he said.

A Kearney native, Pete’s connection to UNK goes back to the 1960s, when he enrolled at the school (known then as Kearney State College) as an undergraduate student. He was a member of the Sigma Phi Epsilon fraternity, president of the Interfraternity Council and a student senator.

“I really matured (at Kearney State). I think that’s probably where this service mindset started,” said Pete, who was named the college’s Outstanding Greek Man and Outstanding Senior Man.

He was already operating his own business when he graduated in 1970 with a bachelor’s degree in business administration. Pete started Varsity Formal Wear, a tuxedo rental shop, in 1969 and contracted the cleaning to Liberty Cleaners, which his grandfather opened in 1918 and later sold to Pete’s father. Pete added Liberty Uniform and Linen Supply in 1971 before merging his businesses with Liberty Cleaners four years later to form Liberty Services, a dry cleaning and formalwear business with locations throughout central Nebraska.

The business was owned and operated by four generations of the Kotsiopulos family over 100 years.

A native of Davenport, Jane earned a bachelor’s degree in English secondary education from the University of Nebraska-Lincoln and a master’s in reading specialization from Newark State University (now Rutgers University). She taught secondary English in New Jersey before moving to Kearney, where she managed The Lodge Restaurant, a business her brother-in-law started.

Pete and Jane met at the restaurant and married in January 1973, less than a year after their first date. Jane also worked as the public relations manager for Platte Valley State Bank and personnel/payroll coordinator for Liberty Services before retiring.

In addition to the family business, Pete held positions with the University of Nebraska system and NU Foundation.

He was also asked to lead the integration of the UNK Alumni Association and NU Foundation’s Kearney office, serving in a dual role as vice president for UNK development and executive director of the alumni association while mentoring Lucas Dart, who took over as vice president of alumni relations and development for UNK in March 2014. Pete remained with the foundation as senior director of development until his retirement in 2019.

“Although they’re both now technically retired, they continue to help wherever help is needed,” Kristensen noted.

Pete and Jane have served on numerous UNK boards and committees, including the Chancellor’s Advisory Committee, capital campaigns and as NU Foundation trustees. He’s a former member of the Nebraska State College Board of Trustees, Nebraska Postsecondary Education Commission and University of Nebraska Medical Center Board of Counselors, and she’s been active on the UNK Academic Affairs Advisory Board and UNK Athletics Board. Jane was also on the committee that started the Blue Gold Classic, an annual golf tournament that raises money for Loper athletic programs.

The Kotsiopuloses are regular attendees at UNK sports, performing arts and academic events, and they provide financial support for a variety of programs and projects, including the Kotsiopulos Family Scholarship they started after Pete’s mother passed away in 1997.

“I’m such a huge fan of UNK, even though I didn’t come here,” Jane said. “It’s such a gift to Kearney in so many ways, and it just keeps becoming a better and better university.”

“The young people who come here have been such great citizens of Kearney,” she added. “They add a lot to our community.”

“Kearney is pretty unique, and without UNK it would be a totally different city,” he said.

In addition to the Cope Cornerstone of Excellence Award, the Kotsiopuloses received the UNK Alumni Association Jim Rundstrom Distinguished Service Award in 2019 and Kearney Area Chamber of Commerce’s Friend of Kearney Award in 2005.

Pete has been recognized as a UNK Distinguished Alumni, Sigma Phi Epsilon Distinguished Alumnus, Kiwanis Citizen of the Year, Nebraska Diplomats Ambassador of the Year and Kearney High School Distinguished Graduate, and he earned a Kearney Freedom Award in business. He served on Kearney City Council for 12 years and was mayor from 1994 to 2002. He’s also been involved in the Nebraska Diplomats, Boy Scouts of America, League of Nebraska Municipalities, The Great Platte River Road Archway, Kearney Area Chamber of Commerce, United Way of the Kearney Area and Kearney Sertoma Club.

Jane has been a board member for the Crane River Theater, Friends of Lied and Kearney Public Schools Foundation, and she served on former Gov. Kay Orr’s Judicial Nomination Commission and co-founded the local PRIDE program, which taught sixth graders and their parents about the risks of drug use. She also supports Crossroads Mission Avenue and assisted with capital campaigns for Rowe Sanctuary and the Kearney Area Children’s Museum.

The Kotsiopuloses are members of Holy Cross Lutheran Church and they were both named admirals in the Great Navy of the State of Nebraska. They have two daughters – Kara Steffen of Kearney and Julia Hernandez of La Vista – and five grandchildren. 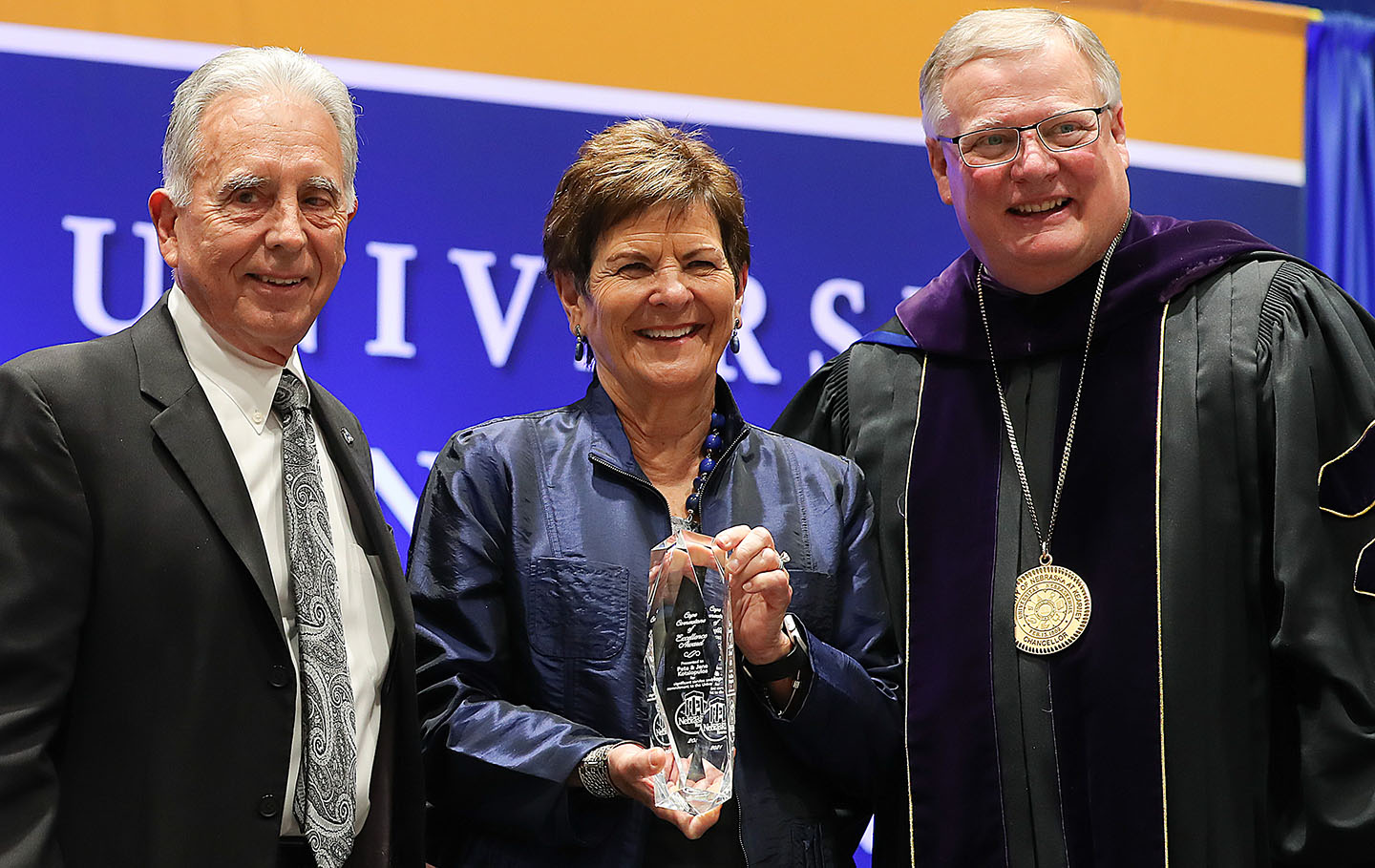