KEARNEY – Each of the roughly 3,200 toe tags displayed inside the University of Nebraska at Kearney’s Calvin T. Ryan Library represents a life cut short.

They were mothers and fathers, aunts and uncles and brothers and sisters who died along the U.S.-Mexico border during their pursuit of a brighter future. Some succumbed to the extreme heat and dehydration, and others were killed by gunshot wounds and blunt force injuries. Many of them were never identified.

“This is a really visual, interactive way to bring home the reality of what these immigrants are going through during their attempts to make it to the U.S.,” said university archivist, digital repository manager and associate professor Laurinda Weisse, who helped bring the “Hostile Terrain 94” exhibit to UNK.

Developed by the Undocumented Migration Project, a nonprofit research, art, education and media collective directed by UCLA professor Jason De León, the 20-feet-long art installation memorializes those who died between 2000 and 2020 while crossing the U.S.-Mexico border through the Sonoran Desert and raises awareness about the Border Patrol policy known as “Prevention Through Deterrence.”

The exhibit is composed of handwritten toe tags attached to a map of the Arizona-Mexico border in the exact locations where remains were found. The tags include the individual’s name (if known), age, sex and cause of death, as well as the condition of their body and when and where it was located.

One of the most powerful elements of the participatory art project requires volunteers to fill out the 3,000-plus toe tags and place them on the map.

Weisse called “Hostile Terrain 94” an awareness project. She hopes people who view the map will rethink any preconceived notions about Latin American immigrants and pay closer attention to the situation at the U.S.-Mexico border.

“This isn’t something that needed to happen,” Weisse said. “Geopolitically, we’ve made this situation worse in so many different ways, and the result is these people who lost their lives.”

The “Prevention Through Deterrence” border control strategy was implemented during former President Bill Clinton’s administration and continues to be used today. The policy, adopted in 1994, blocked urban entry points and funneled people trying to cross the border illegally to more remote areas with harsher environments, known as “hostile terrain.”

This strategy failed to deter illegal immigration, and more than 6 million people have attempted to enter the U.S. through the Sonoran Desert since 2000, according to the Undocumented Migration Project.

Warren, who worked with Weisse on the UNK display, said it’s important for people to recognize these populations and the dangers they face after leaving their home countries in search of a better life.

“This is a reality, and we need the people of Kearney to see this,” she said. “If we aren’t aware of what’s going on at the border and we don’t see this tangible, physical representation of the people who have died along that path, I think we are poorer for it.” 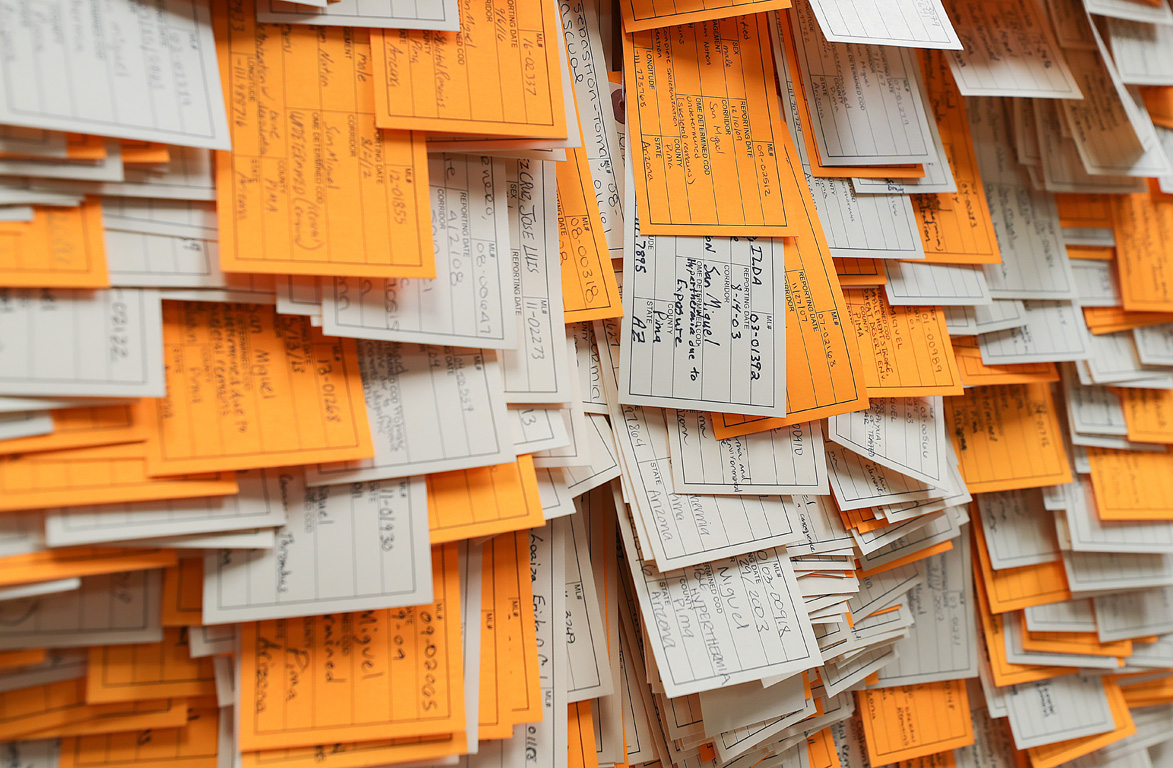 The “Hostile Terrain 94” exhibit will be displayed on the main floor of UNK’s Calvin T. Ryan Library through April 20.

The exhibit is open to the public. All library visitors must wear face masks. A virtual exhibit can be viewed on a mobile device at hostileterrain94.glitch.me.

UNK associate Spanish professor Jon Dettman will discuss the humanitarian crisis at the U.S.-Mexico border during a virtual presentation scheduled for 3:30 p.m. April 14 on Zoom.