The redshirt senior from Lincoln knows how quickly this opportunity can be taken away.

Dawkins and his University of Nebraska at Kearney teammates were preparing for their final workout before weigh-ins at last year’s NCAA Division II tournament in Sioux Falls, South Dakota, when COVID-19 brought the world of sports to a standstill.

That moment, which ended the Lopers’ season less than 24 hours before they were scheduled to compete for a national championship, is still fresh in Dawkins’ mind.

“Having something you worked that hard for be taken away just like that, it was really hard,” he said. “There were a lot of tears.”

The national runner-up at 133 pounds in 2019, Dawkins was seeded fourth in the same weight class when last year’s tournament was canceled. He finished the season with a 13-match win streak and 26-9 record, earning All-American honors for the second time.

For a while, the decision to cancel the national tournament left a bitter taste in his mouth, Dawkins admits, then he decided to treat it like any other loss.

It became a learning opportunity and motivation to approach this season with even more focus and determination.

“We only have a short amount of time,” Dawkins said. “You never know when the last time you’ll be able to wrestle is, so I might as well give it my all and leave it all on the mat.”

That mentality, which is shared by the entire UNK wrestling team, led to incredible success during the 2020-21 season.

The Lopers are ranked No. 1 in the country heading into the NCAA Division II Championships, which begin today at the America’s Center Convention Complex in St. Louis, Missouri. For the first time in school history, UNK qualified its entire lineup for the two-day tournament. No other team in the field has 10 national qualifiers.

“Top to bottom, this is one of the most competitive teams we’ve had,” said UNK head coach Dalton Jensen. “It’s obviously something special when you have 10 national qualifiers, especially in a year when the qualification spots were limited.”

With nine Lopers seeded eighth or better, Jensen believes all 10 UNK wrestlers have a good chance to earn All-American status, which requires a top-eight finish at the national tournament.

“These guys don’t want to let anybody come home empty-handed,” he said. “They want everyone to walk away with an All-American honor.”

If that happens, the Lopers would almost certainly claim their fourth national championship as a team, adding to the titles they won in 2008, 2012 and 2013. UNK has finished in the top eight at 18 straight national meets, including 10 top-three performances.

“The goal is always the same,” Dawkins said. “That’s part of the reason why I love being on this team. My goal is to win a national title individually and as a team, and I feel like we definitely have the firepower to do it.”

Dawkins, seeded third at 133 pounds, enters the NCAA Division II Championships with an 11-2 record. He was the most dominant Loper at the regional tournament, earning two first-period pins and a 10-5 decision to defend his title.

“I feel like I’m in the best shape I’ve ever been in and I’m more confident in myself than I’ve been in a long time,” he said. “I don’t feel like anybody wants it more than I do. I don’t think anyone has put in more work than I did this year, so I really do feel like I can go down there and win a national title.”

Wesley Dawkins has wrestling in his blood.

His father Wallace was a national champion for the All-Army wrestling team before competing for the University of Nebraska-Lincoln from 1984-88.

Dawkins has participated in the sport since he was 3.

“You’re not supposed to start until you’re 4, but my dad was a coach, so he got me some early matches when I was younger,” he said with a smile. 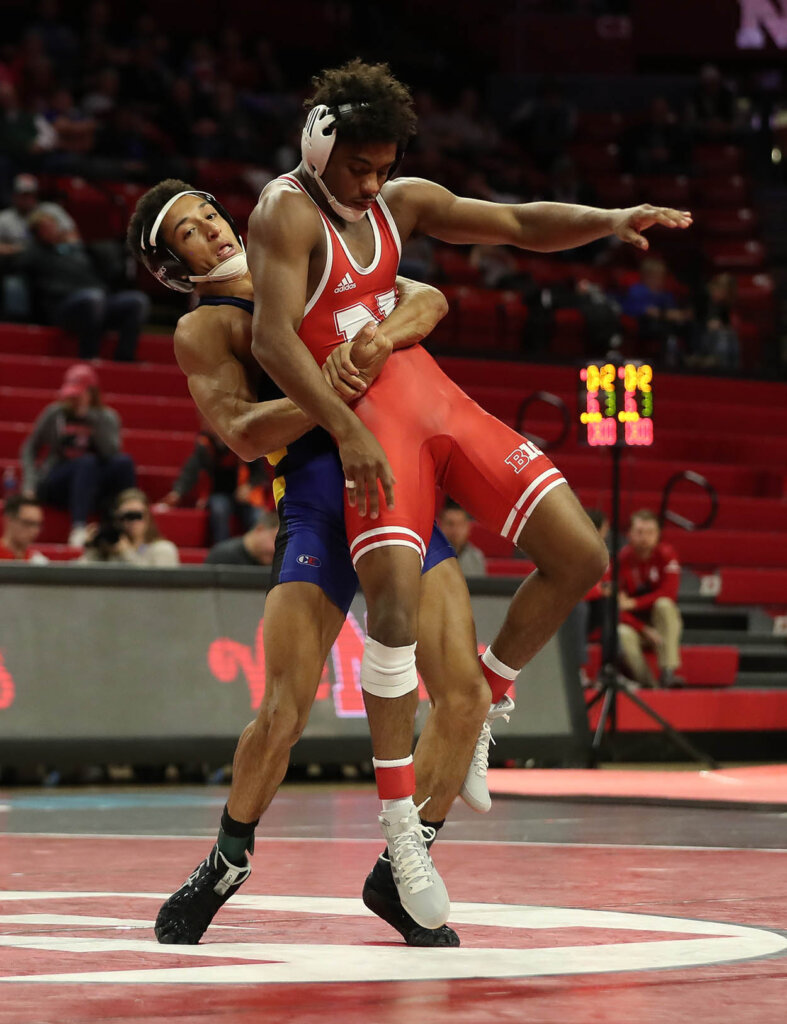 The instruction and support he received from his father led to immediate success when Dawkins reached Lincoln High School.

As a freshman, Dawkins finished third in Class A at 106 pounds, and he followed that performance with a state title the next season, going 38-0. Dawkins added another third-place finish in 2015 before capping his Link career with a perfect 42-0 season and second state title, this time at 120 pounds. He was the first Lincoln High wrestler to record 150 career victories.

Another former UNL wrestler, Zac Dominguez, served as his coach at MWC Wrestling Academy in Papillion, one of the top wrestling clubs in the country.

“That was a whole different atmosphere,” Dawkins said of the academy. “Everyone had the same goal – win a national title.”

This mindset, and a former UNK All-American, helped bring Dawkins to Kearney. He was seriously considering a larger scholarship offer from Chadron State College when fellow Lincoln High graduate Chase White reached out.

White, who placed fifth at 157 pounds when UNK won its last national championship in 2013, asked Dawkins if he was more interested in money or becoming the best wrestler he can be.

“That phone call from Chase helped me determine that I wanted to come here,” said Dawkins, who was also impressed by the program’s competitive, yet family-like environment.

“I knew this is the place I wanted to be because of the atmosphere they had,” he said.

Dawkins redshirted in 2016-17, going 15-6 while competing unattached. He won the 63-kilogram division at the UWW Cadet and University Nationals in Akron, Ohio, the following summer, and posted a 20-7 record in 2017-18 while wrestling behind All-American Bryce Shoemaker.

“His development has been great,” Jensen said. “He’s put in a lot of time in the offseason and had success on the national stage in Greco-Roman. Once he was ready to get in the lineup, he was a national finalist immediately.”

Jensen called Dawkins “an exciting wrestler” who’s capable of putting points on the board in a flash.

“He’s probably one of the most dangerous wrestlers in Division II,” the UNK coach said. “He’ll get ahold of you and put you on your back in the first 30 seconds. It’s pretty tough for a lot of 133-pounders to stop that.”

Dawkins also has a magnetic personality and strong work ethic, according to Jensen.

“I think that’s going to bode well for him in the future,” he said, referencing Dawkins’ industrial distribution major.

Although he’ll graduate this year, Dawkins isn’t ready to join the workforce just yet. He plans to use his extra year of eligibility to compete for the Lopers in 2021-22.

“If last year taught me anything, it’s that you have to cherish the moments that you’re in,” Dawkins said. “I’m a part of something special here and I want that to last as long as it can.” 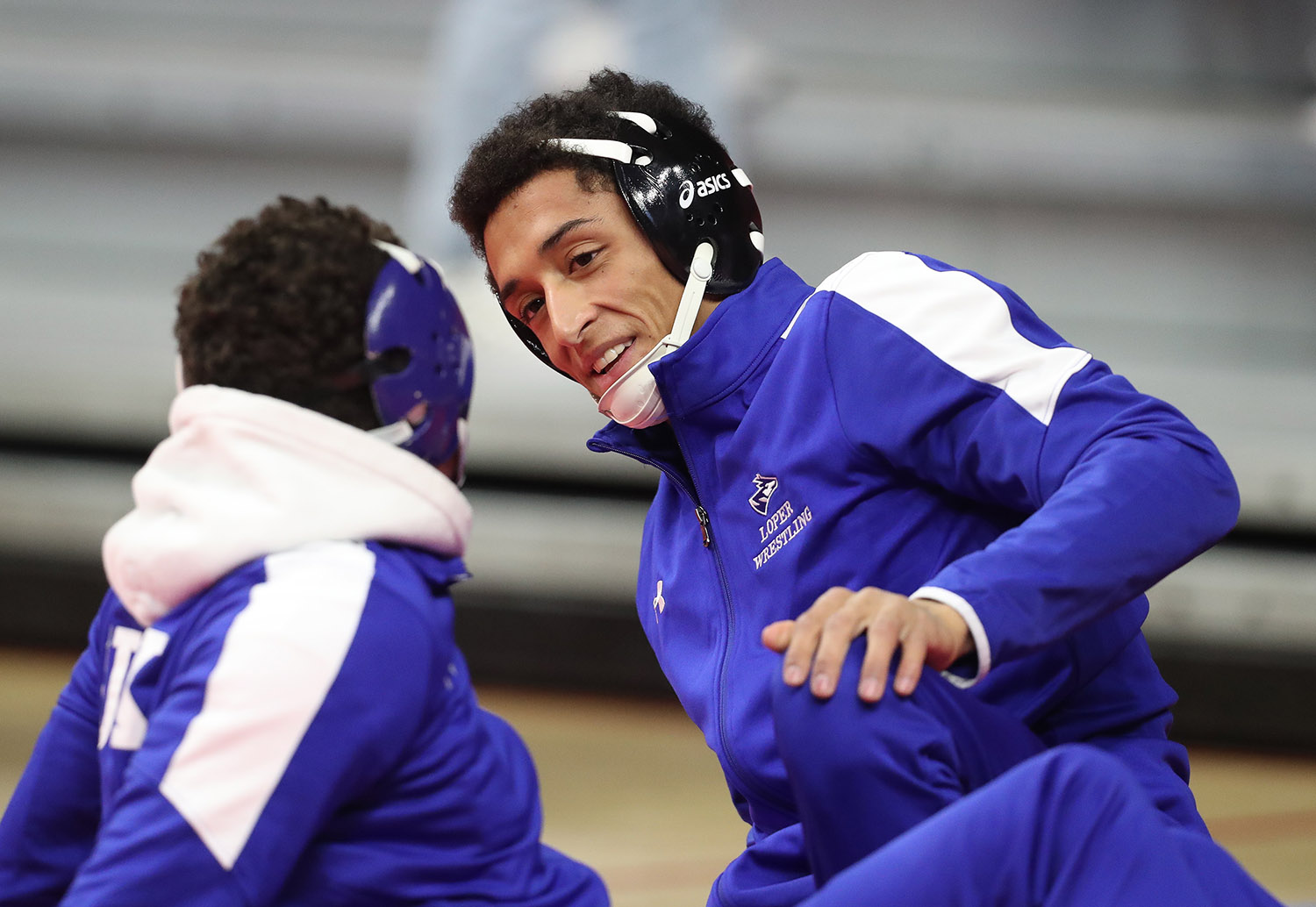