“Leaving high school was a big transition,” she said. “I had to look up YouTube videos of freshmen moving in because I didn’t know anything. Should I bring a mirror? Do they have a checklist? Is that a thing?”

An Omaha Northwest High School graduate, Smith-Whiteside also was homeless for several months during her senior year and the summer after graduation as she prepared for college. And she continuously worried about her health – the effects of diabetes and a tumor diagnosis.

Despite these obstacles, she persevered and is now excelling as a sophomore at the University of Nebraska at Kearney.

Smith-Whiteside grew up “very poor” with her parents and two brothers in north Omaha.

They lived on limited funds and food stamps and resided in low-income housing in a dangerous part of the city.

“Growing up in an area like that, where a lot of things happen, my mom always told us if you’re going to do anything in this world, just be kind,” Smith-Whiteside said. “‘Keep God first, family second, and just be kind. And I promise you that it will go a long way.”’

Though she didn’t have much herself, she would save her money from part-time jobs and spend it on neighbors and strangers. Once, she bought and donated a wardrobe to a student who wore the same clothes and worn-out shoes to school every day. 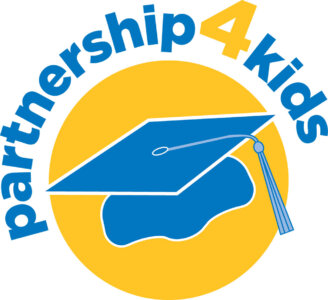 Smith-Whiteside also was an active volunteer at Dream City Church and through her involvement in the nonprofit organization Partnership 4 Kids, formerly known as Winners Circle.

“I just love giving back. I feel like when people give me something, it’s only right to keep passing it forward,” she said.

She first connected with the Omaha-based organization when she was a kindergartner at Conestoga Magnet Elementary School. Through the program, Smith-Whiteside met with adult mentors from the community several times a month in her school.

“We talked about school and what we were going to learn the following week,” she explained. “They asked about home life and checked on grades.”

When the school hosted book fairs, the mentors bought books for the children.

Partnership 4 Kids also encouraged families to be involved in their child’s education. Each month, it hosted an event with awards and prizes for kids who met academic and personal goals.

“We were all about the prizes,” Smith-Whiteside said with a smile. “That is exactly why I always had good grades and always went to these.”

As Smith-Whiteside continued with the program in high school, her mentors encouraged her to go to college and the organization awarded her a $2,000-per-semester scholarship.

All the while, Smith-Whiteside was balancing work and school and, from April through August 2019, she faced the added challenge of homelessness.

Her family’s landlord sold their rental after the landlord’s husband died, Smith-Whiteside explained, and they couldn’t find another affordable place to live before their home was sold.

“It’s so hard to find Section 8 homes. A lot of people don’t accept you,” she said.

Her parents and younger brother stayed with her uncle in a small apartment. Smith-Whiteside worked late and didn’t feel safe driving in that neighborhood at night.

“I was sleeping from friend’s house to friend’s house, couch to couch, and sometimes in my car while I was still in school,” she said. “But nobody knew because I didn’t show it.”

She was also dealing with major health issues at the time. In March of that year, doctors found a benign tumor between her ovaries and uterus that couldn’t be removed. She was diagnosed with Type 2 diabetes at age 10 and started developing painful skin boils at age 12.

“Going through all of this before the age of 20 was frightening, but I had faith, a praying family and a mighty God,” Smith-Whiteside said. “I’m not going to let these conditions and disabilities take over my life, including my pursuit for higher education.”

Despite her struggles, Smith-Whiteside continued to fill out scholarship applications and look at colleges. She visited UNK through College Possible and immediately fell in love.

“I thought, ‘Yeah, this is my school now. I’m going to go here and I’m going to love it,’” said Smith-Whiteside, who received enough scholarship and grant money to cover her full tuition, plus room and board. One scholarship, from the Susan Thompson Buffett Foundation, is worth nearly $9,000 a year.

Two days before she moved into UNK’s Mantor Hall, her family also found their new home in Omaha.

As a Thompson Scholar and first-generation college student, Smith-Whiteside has benefited from the support she receives at UNK.

Right away, she joined TRIO Student Support Services, a federally funded program that provides academic and personal support, financial guidance and career development opportunities to first-generation and income-qualified students and those with documented disabilities.

Her TRIO adviser, Bambi Sell, connected her with an English tutor who taught her research paper formats. This was especially beneficial to Smith-Whiteside, who wasn’t required to write papers in American Psychological Association or Modern Language Association styles at her high school.

“It was really nice to have Bambi there guiding me through everything and to have that type of support,” Smith-Whiteside said.

She credits UNK’s Disability Services for Students Office for helping her manage her health issues. That office connected her with doctors and made accommodations with Smith-Whiteside’s professors.

“DSS has helped me recognize my own capabilities, not inabilities,” she said.

The program also acclimated her to campus and helped her develop relationships with staff members and students.

“It’s not mom, but having them here to support me was nice,” she said.

Smith-Whiteside’s passion for giving back inspired her to major in social work and minor in family science. She also has a desire to attain UNK’s early childhood family advocate certificate.

She learned about the social work profession in high school while job shadowing a social worker who helped older adults with disabilities. “I could see myself doing this,” she thought.

As a social worker, she wants to help families stay together.

Smith-Whiteside also has a passion for working with children. She often babysat and worked at her mom’s day care in Omaha.

“Being with kids always brought joy to me,” she said.

Volunteering and working five days a week at UNK’s LaVonne Kopecky Plambeck Early Childhood Education Center has strengthened that love. So, she decided to pursue both social work and early childhood education careers.

As a teacher assistant in the prekindergarten classroom, Smith-Whiteside helps lead teacher Cassie Morten facilitate activities for the children.

Morten said Smith-Whiteside brings brightness and joy to the classroom.

“She bonds with each child in their own special way. She knows how and what each child’s interests are and focuses on those interest to make them happy,” Morten said. “She can calm and soothe a child easily. If a child has an emotional state, I can look over in seconds and she has them calm and smiling. She is an inspiration to watch and see her love for children.”

Interim Director Chelsea Bartling said she knew Smith-Whiteside was a “keeper” after she worked at the Plambeck Center for just a few days.

“Phadiziana goes above and beyond to make the students feel welcomed, loved and supported. She is one of the first people to volunteer to stay late for an event, work in the classroom or pick up an extra shift,” Bartling said.

Smith-Whiteside recently took on extra responsibility when she taught the prekindergarten class for a week while Morten was gone. She was nervous at first but felt comfortable once she facilitated her own projects with the kids.

“I thought, ‘Yeah, I can do this while being a social worker at the same time. I’ll just have to have a split schedule,’” she said.

Plus, Smith-Whiteside added, her family is happy she is doing something she enjoys. 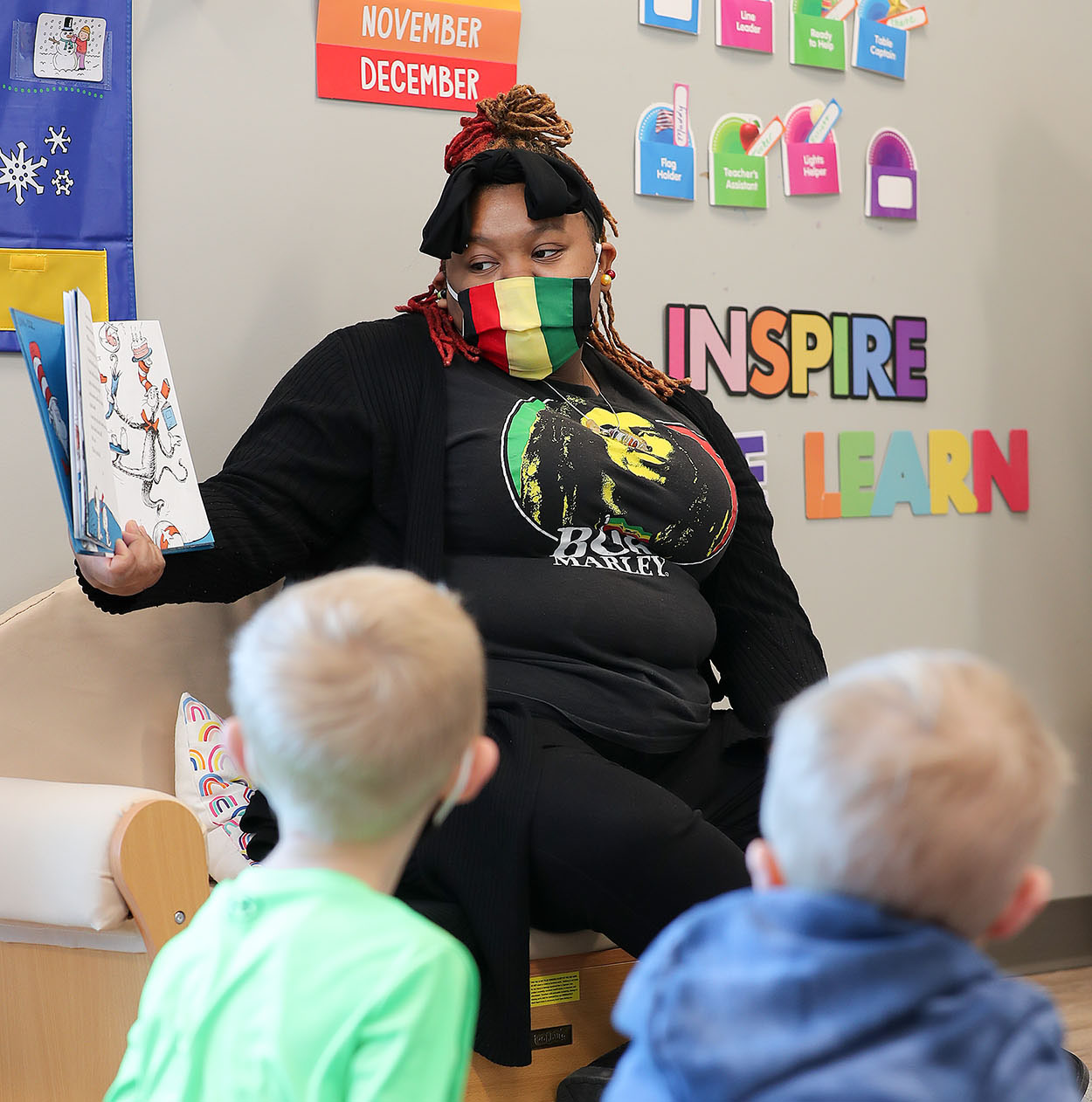