When: 10 a.m., Friday, July 31
Where: UNK Foster Field
Social Media: Follow @UNKearney and #lopergrad on Twitter to see photos and posts. Join in the #lopergrad conversation at http://unk.edu/eventdashboard
Live Broadcast: A pre-commencement show will air beginning at 9:20 am. at www.youtube.com/UNKearney. It will be followed by a live broadcast of the event. A live viewing also is available in the Fine Arts Building south of the stadium for guests beyond the four-per-student limit and others.

KEARNEY – Undergraduate and graduate degrees for more than 350 spring and summer graduates will be conferred at commencement exercises 10 a.m. Friday at the University of Nebraska at Kearney. The event will occur outdoors on Foster Field for the first time since 1990.

University of Nebraska President Ted Carter will address the graduates and Chancellor Doug Kristensen will confer the degrees.

Walter “Ted” Carter Jr. began his tenure as the eighth President of the University of Nebraska on Jan. 1, 2020. A retired United States Navy Vice Admiral and Naval Flight Officer, he served from 2014-19 as the 62nd Superintendent of his alma mater, the U.S. Naval Academy. As Superintendent – the Naval Academy’s equivalent of a university president – he oversaw all functions of the institution, including leadership of 4,400 students and 1,500 faculty and staff, management of a $500 million budget, and oversight of academics, facilities, admissions and policy.

Prior to his service at the Naval Academy, he was the 54th President of the U.S. Naval War College from 2013-14. Carter earned his bachelor’s degree in physics and oceanography from the U.S. Naval Academy and holds educational credentials from the Navy Nuclear Power School, the U.S. Air Force War College, the Naval War College and the Armed Forces Staff College. He is a naval flight officer with more than 6,300 flying hours and has completed 2,016 carrier-arrested landings, an American record. He is also a Distinguished Flying Cross and Bronze Star recipient. He graduated from the Navy Fighter Weapons School (Top Gun) in Miramar, California and was commander for the Carrier Strike Group Twelve, in which he commanded 20 ships, two nuclear-powered aircraft carriers and two carrier air wings.

The national anthem will be performed remotely by Carrie Ann Vail, a 2020 Master of Arts in education graduate now living in Ohio.

Graduates from spring 2020 were previously announced and invited to participate in the ceremony. Because of size limitations on outdoor and indoor venues, graduates are being distributed four tickets to share with family/friends. The audience size is limited to the safe capacity of the backup location at Health and Sports Center. The graduates’ tickets will be given to them at rehearsal on Thursday. There will be no tickets distributed directly to the public.

Students participating in the ceremony will be required to wear traditional commencement attire and face coverings. Participating students, personnel and guests will be seated at recommended distances for safety.

Individuals are asked to monitor themselves for symptoms and stay at home if they are feeling ill.

Participants are encouraged to park in Lot 3 east of the Nebraskan Student Union and Lot 1 east of Centennial Towers East, leaving the west lots for guests.

Graduates and faculty will check in and line up south of the Nebraskan Student Union. Visitors with handicap permits can park in the lot directly west of the stadium (Lot 12). Those transporting a handicapped person will have access to drop off the person in that lot and will need to move their vehicle to another lot.

Visitors with wheelchairs can sit in the upper section on the west stadium. Enter the “Press Box Entrance” on the southwest corner of the stadium and take the elevator to the third floor. Ushers will be available to assist.

A livestream will be provided for an overflow crowd and additional guests beyond the four-per-student limit. Guests who are unable to attend in person may watch the ceremony via the livestream or view the recording later via UNK’s website, or, at an overflow indoor viewing site in the Fine Arts Building Recital Hall.

Graduates who have questions that aren’t answered on the commencement website should call the Registrar’s office at 308-865-8527 or email unkregistrar@unk.edu. 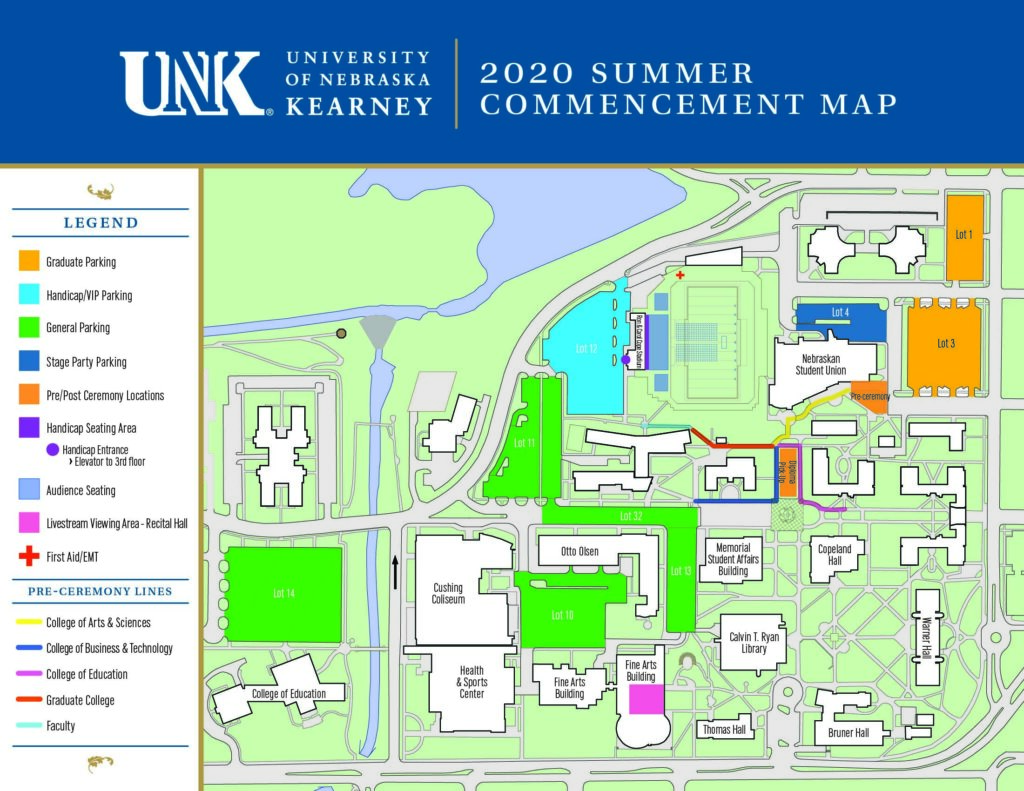 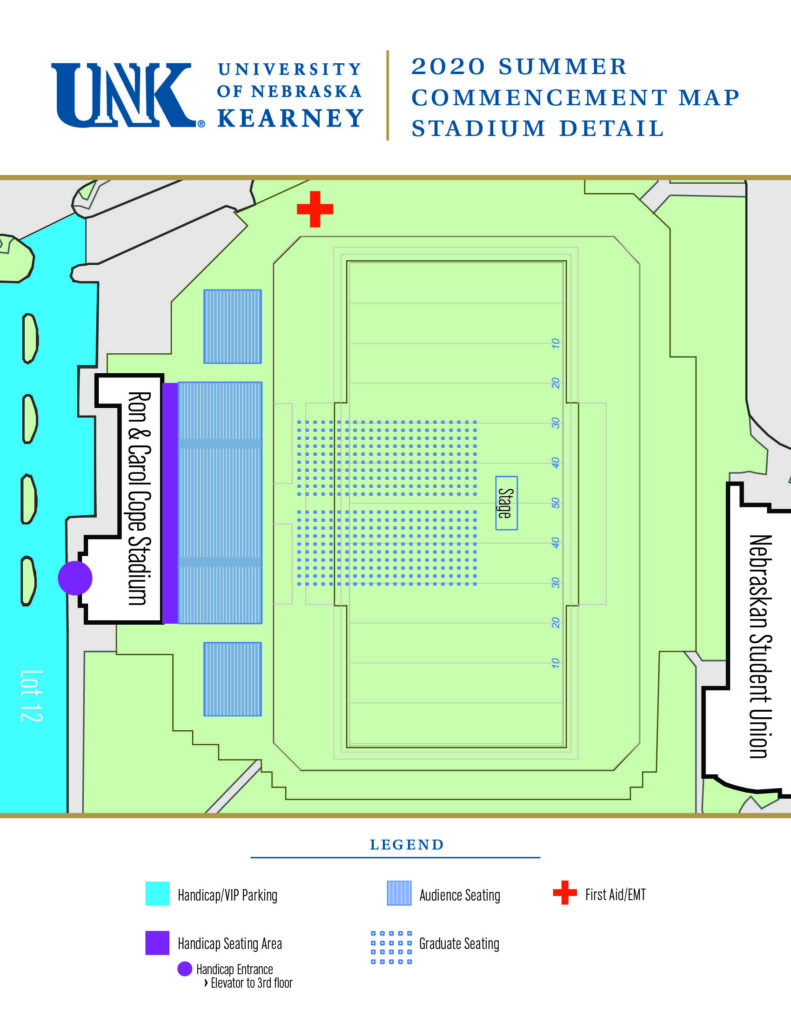 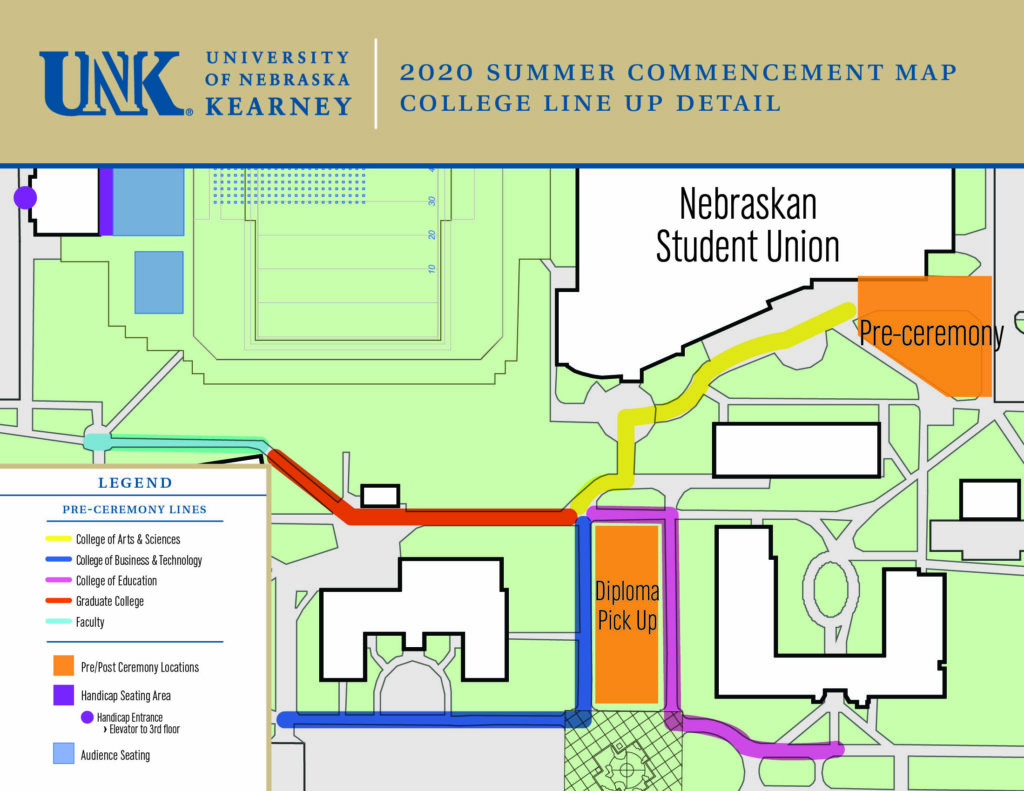