In fact, it’s something she tries her best to avoid.

But this connection was undeniable.

Carlson and her husband Darby, a senior lecturer in UNK’s Department of Biology, were part of the same hiring committee for an assistant professor position three years ago. They had just interviewed Nick Hobbs, a Wichita, Kansas, native who happened to love cats and the popular game Pokémon GO.

After the interview, while sitting in their vehicle, they looked at each other and shared the same thought.

“If he gets the job here, we have to introduce him to Alexis, because they’re like the same person,” Carlson said. “They had all the same interests.”

Crete native Alexis Page conducted undergraduate research under Carlson’s mentorship for four years. She earned a bachelor’s degree in molecular biology from UNK in May 2017 and was starting her master’s degree in biology when Hobbs joined the department in August of that year.

The two had met in passing inside Bruner Hall of Science, but Carlson felt like she needed to expedite the process. She and her husband invited them both to an Oktoberfest event at the Buffalo County Fairgrounds, but didn’t reveal the motive behind their plan.

“We had no idea we were being set up,” Page said.

Once they arrived at the fairgrounds, Hobbs quickly put two and two together.

“At that point, the hamster got on the wheel and the cogs started to turn,” he said.

By the end of the night, the two “science nerds” made plans for a second date.

“The rest is history, I guess,” Page said.

Hobbs popped the question over Christmas break in 2018, during a trip to Disney World with Page’s family.

She had her suspicions ahead of time, so Page asked whether she needed to get her nails done. Hobbs played dumb, then she started looking for a ring.

“I finally made it to his backpack, and that’s when he stopped me,” she said. “So I knew it was coming, I just didn’t know when.”

With the Magic Kingdom castle in the background, Hobbs dropped to one knee and proposed. Page, sporting perfectly manicured nails for the impending photos, said yes.

As the couple starting thinking about wedding venues, one location immediately came to mind – the UNK campus.

“It’s a special place for both of us,” Hobbs said. “It’s where we met. It’s where we both worked at the time.”

However, it wasn’t ideal for the roughly 200 guests they expected to attend. Instead, they chose Kinkaider Brewing Company in Broken Bow.

Their plans took another turn after the COVID-19 pandemic hit. Page wanted to keep the wedding date – 6-6-2020 – but the couple didn’t know how state health guidelines would impact their big day.

So they trimmed the guest list, and took another look at UNK.

With Chancellor Doug Kristensen’s blessing, the couple tied the knot Saturday afternoon under the Bell Tower on campus. About 20 family members and friends looked on as Hobbs and Page shared their first kiss as husband and wife.

“I can’t imagine a better place to get married,” said Page, a soil health coordinator at Ward Laboratories in Kearney. “UNK holds such a special place in my heart. I wouldn’t be where I am today without UNK.”

Carlson, who serves as Hobbs’ mentor in the biology department, officiated the intimate ceremony. She’s performed several weddings in the past, but this one was “extra special.”

“It means a lot that they asked me to do it,” she said. “Alexis is like a member of my family. She’s like a daughter to me. And Nick has become such a good friend to us and my kids love him, too.”

Hobbs and Page, who will celebrate their marriage with an Aug. 1 reception in Broken Bow, know they owe a lot to their UNK matchmakers.

“We’re best of friends now with both Kim and Darby,” Page said. “They played such an important role in us getting together. We couldn’t imagine getting married without Kim performing the ceremony.” 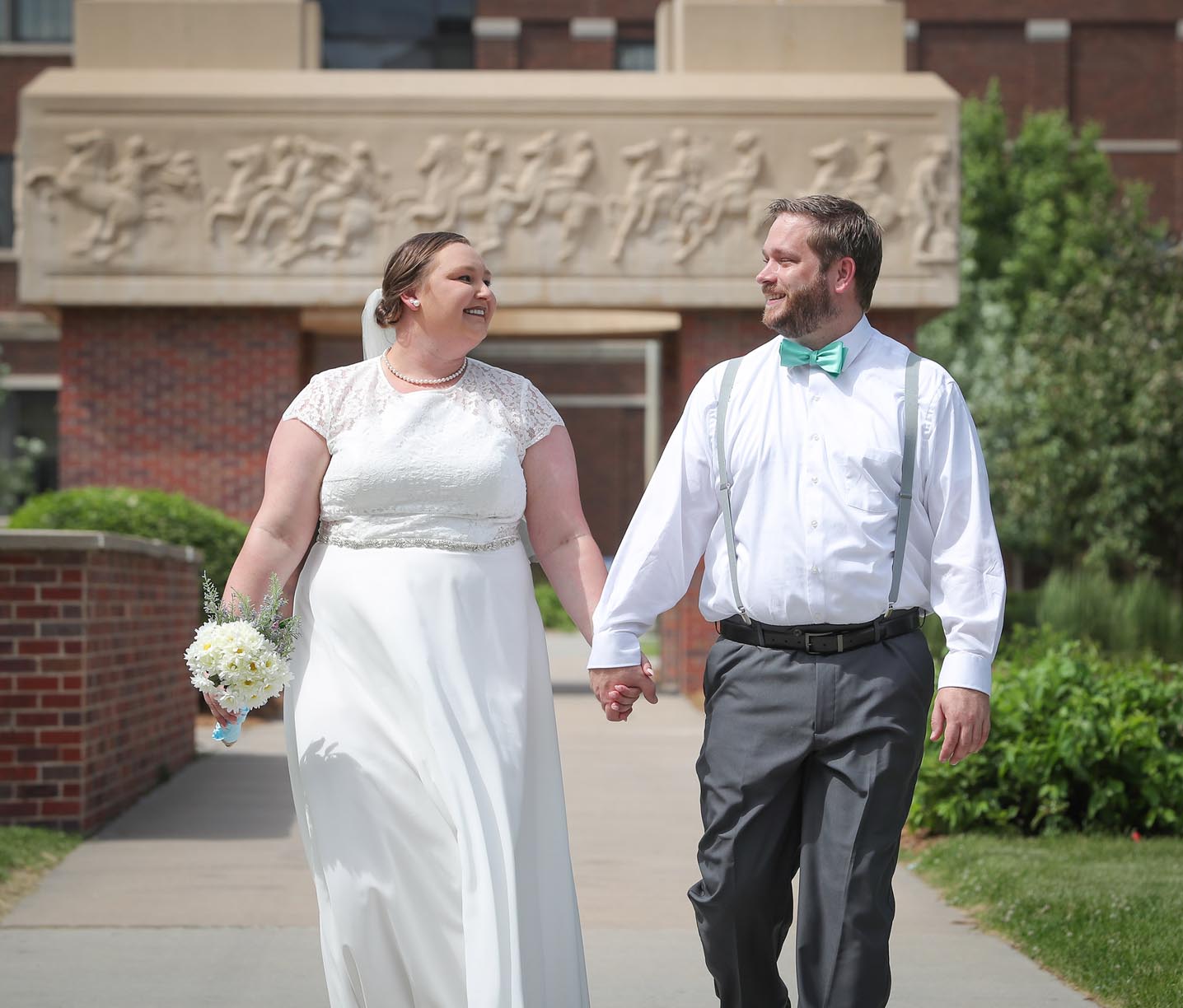