KEARNEY – Students from Kearney Catholic and Sutherland high schools will attend the University of Nebraska at Kearney this fall as Omaha World-Herald/Kearney Hub Scholars.

This year’s recipients of the prestigious scholarship are Kelsey Borowski and Bonnie Naughtin.

The Omaha World-Herald/Kearney Hub Scholarship is one of the premier academic awards at UNK. It will provide room and board, tuition and fees and books for the duration of the recipients’ collegiate careers at UNK.

Angela Hollman, director of the UNK Honors Program, said there were 109 applicants for the OWH/Hub Scholarship. Forty students were invited to campus for interviews, tours and lunch with UNK leaders.

“This scholarship fund was established years ago to support UNK students looking to become leaders in their career fields and in our communities,” said Kearney Hub Publisher/Editor Shon Barenklau. “We are proud to support these top-notch students year after year.” 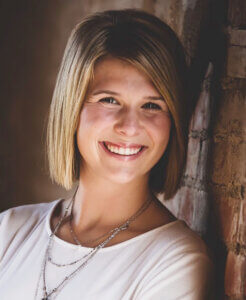 The daughter of Mike and Ranee Borowski, Kelsey Borowski graduated from Kearney Catholic High School with a 4.0 GPA. She scored a 32 on the ACT and plans to major in elementary education.

As the youngest of four siblings with a large age gap between, Borowski said she had the unique experience of becoming “Aunt Kelsey” at a young age. These experiences with her nephew and nieces fostered her passion for working with children, which has grown into her future career path.

She has been an active volunteer providing service to the elementary school, Red Cross and her church. Borowski has received many awards for her scholarly abilities and fine arts performances during one-act competitions and as a member of the speech team. She also participated in four sports.

The daughter of Matthew and Tara Naughtin, Bonnie Naughtin graduated from Sutherland High School with a 4.0 GPA. She scored a 34 on the ACT and plans to major in biology, a choice stemming from a fascination with the field of medicine at a young age.

Naughtin was an active member of the All-State Chorus for four years and found particular joy in learning songs in other languages. This passion carried forward in her choice to minor in Spanish while attending UNK.

Naughtin participated in a variety of extracurricular activities, including four sports and musical activities. She was a state medalist in FBLA, which led to her participation in the national competition. She also received multiple accolades in speech and drama, reaching state qualifiers and receiving awards such as district outstanding actress and state outstanding performer.