BURWELL – Megan Helberg doesn’t expect her students to have their lives mapped out before they graduate from high school.

Instead, she encourages them to pursue their passions and follow whichever path brings them the most joy.

“It’s OK to make a change,” said Helberg, an English teacher at Burwell Junior-Senior High School. “A lot of times, we’re really afraid to make a change, but sometimes change can be a beautiful thing.”

That mindset made the 35-year-old the person she is today.

Helberg grew up on a ranch in the Nebraska Sandhills and graduated from Loup County Public School in Taylor, a rural district with a PK-12 enrollment of roughly 70 students.

Her mother Sue McNeil is a well-known educator in the area. She taught social studies at Loup County, served as principal and superintendent at Anselmo-Merna Public School and was named the Nebraska Department of Education’s Teacher of the Year in 1995. Now semiretired, McNeil continues to substitute teach in Taylor, Burwell, Ansley, Sargent and other area schools.

A bit intimidated by McNeil’s success, Helberg was reluctant to follow in her mother’s footsteps when she enrolled at Chadron State College, where she competed on the track and field and volleyball teams. Helberg “dabbled” in a few different areas before graduating in 2006 with a bachelor’s degree in business administration. 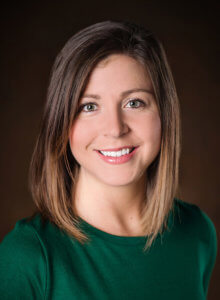 Two years later, while living in Omaha and working at a pharmacy, she began to reevaluate her career choice.

“I didn’t really want to be a pharmacist,” Helberg said. “Even though I have a lot of respect for that profession, it wasn’t my passion.”

During a heart-to-heart with her then-fiancé Dan, Helberg asked herself a simple question: What brings me joy?

She loved to read and write, enjoyed being around other people and recognized the value of being involved in the community. She wanted to be an English teacher.

“I made that decision and never looked back. It’s been the best decision of my life,” said Helberg, who turned to the University of Nebraska at Kearney to help her land that dream job.

Helberg enrolled in UNK’s Transitional Certification Program, which provides an alternative pathway for individuals with a bachelor’s degree or higher who want to become certified teachers in Nebraska.

“The people at UNK were incredibly helpful,” she said. “They walked me through it step by step, answered every question I had and made it really accessible, which was important for me at the time because I was living in Omaha.”

The Transitional Certification Program allowed Helberg to complete her coursework remotely while continuing to work in the Omaha area, where Dan was teaching and coaching football at Papillion-La Vista Community Schools. Students enrolled in the UNK program are also eligible to start teaching at a Nebraska public school, giving Helberg an opportunity to work at Papillion-La Vista while earning her state certification.

Helberg, who received her teaching certificate in 2010, is one of many Nebraska educators who are making a difference in students’ lives thanks to the Transitional Certification Program.

“There are really great adults out there who were in different professions that now make great teachers, and I don’t know if they ever would have taken that leap without the Transitional Program at UNK,” Helberg said.

In her 11th year as an educator, Helberg teaches eighth, 11th and 12th grades at Burwell Junior-Senior High School, where she’s also a volleyball coach.

After marrying in 2009, Helberg and her husband moved the following year to Loup County, where they live on her family’s cattle ranch west of Calamus Reservoir. Her 85-year-old father Tom McNeil, who received a heart transplant in 1994, still works the ranch with help from his daughter and son-in-law. Dan, a Scottsbluff native, is an English teacher and speech coach at Ansley Public Schools.

“I really love Loup County and the Sandhills. I had a wonderful upbringing here,” Helberg said. “I’m very thankful for a husband who saw the charm in it just as much as I do.”

As a teacher, Helberg is committed to advancing rural Nebraska and ensuring students from these areas aren’t overlooked.

“Just because my students live in a rural area, it doesn’t mean they’re any less eager to learn,” she said. “They just need opportunities brought to them.”

Helberg uses her own experiences as a world traveler to provide these opportunities.

In 2013, she used a Fund for Teachers grant to visit Holocaust sites in Poland, Germany and the Czech Republic and purchase educational materials for her classroom.

“That’s really what started the Holocaust education program at our school,” said Helberg, who was named a Museum Teacher Fellow with the U.S. Holocaust Memorial Museum in 2016, allowing her to learn more about the Holocaust from experts and survivors. She’s also been to the Anne Frank House in Amsterdam and studied genocide in Rwanda.

Helberg has visited about two-thirds of the U.S. national parks and spent time in numerous foreign countries. Last June, she lived with an indigenous tribe for two weeks in the Amazon rainforest.

“Learning about a different way of life always helps me open up my heart and mind and shift my thinking a little bit,” she said.

Her goal is to bring a broader perspective of the world to her students, something she accomplishes by hosting international visitors or organizing video chats with speakers from different countries.

“I want them to see that there’s much more to life than just our little piece of paradise,” Helberg said.

On top of her classroom activities, Helberg started a travel club that’s taken students and community members to Washington, D.C., Boston, New York City, San Francisco and Los Angeles. Their first international excursion, a trip to Spain scheduled for late May and early June, was postponed by the ongoing coronavirus pandemic.

TEACHER OF THE YEAR

A decade after Helberg made the decision to follow her heart, it skipped a beat when she received one of the biggest surprises of her career.

In October, Helberg was named the 2020 Nebraska Teacher of the Year in recognition of her dedication, knowledge and ability to inspire students. She received the award in her classroom during a surprise presentation attended by Nebraska Commissioner of Education Matt Blomstedt, State Board of Education members and media.

“I’m really proud to represent central and rural Nebraska and I know I can be a voice for all teachers across our state.”

Helberg will represent Nebraska at various events and compete for National Teacher of the Year. Her itinerary includes a trip to Washington, D.C., to talk with Congress members and meet the president in the Oval Office.

She’s also scheduled to attend a conference at Princeton University, tour Google headquarters in California and participate in NASA Space Camp in Huntsville, Alabama. The “cherry on top,” according to Helberg, is an invitation to the Division I college football national championship game in Miami, Florida.

Additionally, Helberg was selected as one of three keynote speakers for the National Association for Alternative Certification annual conference in Seattle. However, that event was canceled because of the coronavirus outbreak.

While Helberg appreciates the recognition she’s received, that’s not why she decided to become a teacher.

To her, nothing beats the relationships she develops with students. She loves the stories, the laughter, the unexpected moments and the friendships that last long after graduation.

“That’s where I have found immense joy,” Helberg said. “Obviously I love teaching, but what makes teaching so great is the students. Without the students, that sparkle and magic is lost.”