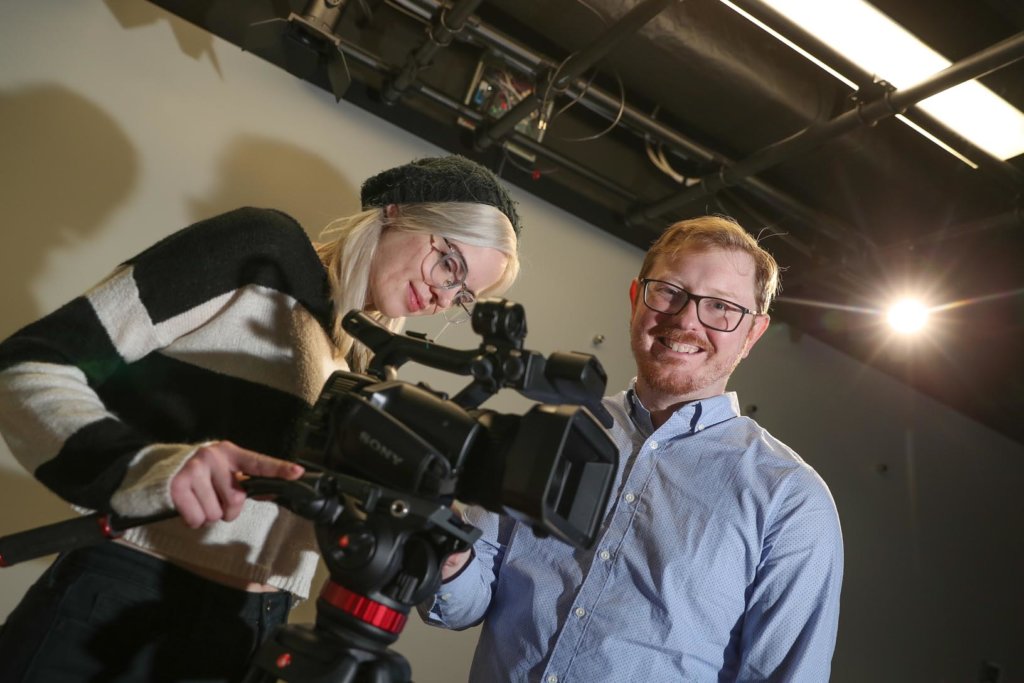 Jacob Rosdail has always been a cinephile.

As a high schooler, the central Iowa native was constantly looking for a reason to bust out his parents’ video camera.

If a teacher wanted a report on Colombia, Rosdail filmed himself talking about the Central American country. When William Shakespeare was the topic, he gathered a few buddies and recreated a scene from one of the writer’s famous plays.

“I always liked making movies with my friends, and some of them were more serious than others,” said Rosdail, who grew up about an hour southeast of Des Moines.

But he didn’t view this affinity for filmmaking as a potential career until he attended an electronic media camp at Wartburg College.

“That totally opened up my world,” Rosdail said.

It also convinced him to enroll at Wartburg, where he double majored in electronic media and public relations with a goal of landing a job as a video editor in a medium-sized market.

As a senior, Rosdail interned with Mudd Advertising in nearby Cedar Falls, Iowa. The internship turned into a part-time job, then a full-time gig as an audio engineer and, within one year, he was a video editor producing automotive advertisements for markets in all 50 states.

“I was doing what my five-year goal was,” Rosdail said, but he wasn’t happy.

“I was part of an assembly line. I didn’t have any ownership in any of the ads.”

Inspired by public radio and programs such as “This American Life,” Rosdail set out to do something more creative with his life. He wanted to be a storyteller. 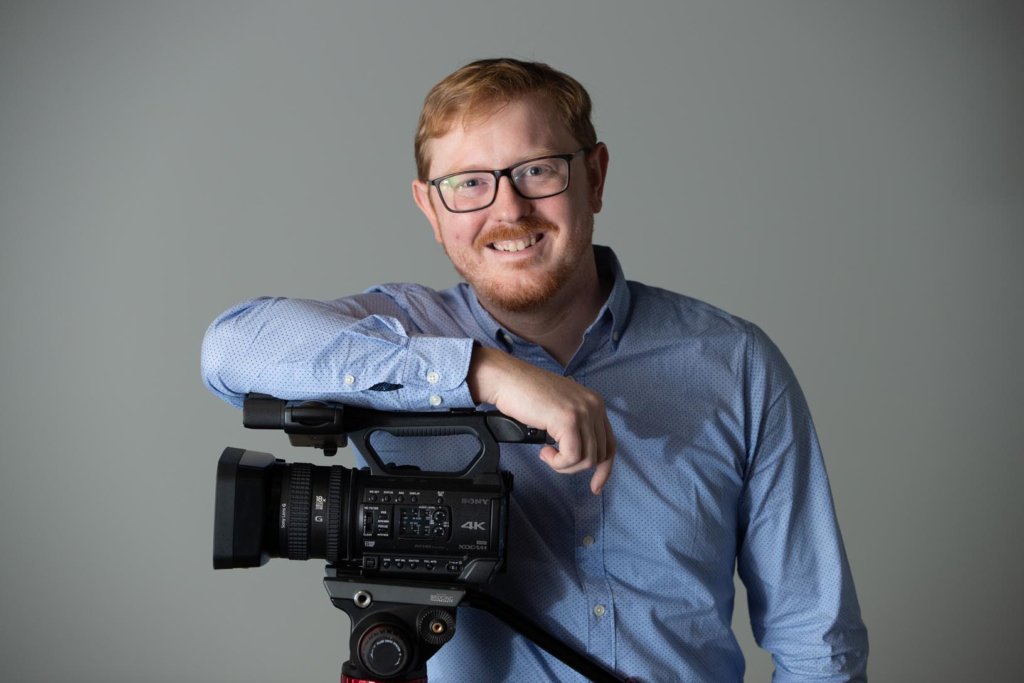 Rosdail got his first taste of documentary filmmaking while working for the Communication Research Institute of William Penn University, a private, liberal arts school in Oskaloosa, Iowa.

In addition to teaching students about video production, Rosdail produced stories for the university-affiliated news outlet. Oftentimes, he would profile interesting or important people in a documentary style to accompany this work.

His first full film – “Historic Measures: Preserving our Future” – highlighted the renovation of a historic building in downtown Oskaloosa. That project led to a partnership with Iowa Public Television that allowed him to produce more documentaries, including a historical piece on Buxton, Iowa, a former coal-mining town with a predominantly African-American population that flourished in the early 20th century, as well as a film focusing on Alexander Clark, who filed the landmark lawsuit that desegregated Iowa public schools in 1868.

Inspired by his passion for documentary filmmaking, Rosdail enrolled at Wake Forest University in 2011 to learn more about the craft.

During his time at Wake Forest, where he earned a Master of Fine Arts in documentary film, Rosdail was director of the school’s graduate student-run video production company, Wrought Iron Productions, and served as a teaching assistant.

“I liked making my films, but I also liked helping other people make their films,” he said. “A lot of documentary filmmaking is problem-solving. You want to have a plan going in. You want to shoot going toward that end, but this isn’t a scripted film. You don’t know what your ending is. You can’t predetermine it.”

Much like the filmmaking process, graduate school took Rosdail down an unexpected path.

He fell in love with teaching, started a family with his wife Ashley Weets, and decided he wanted to be a college professor. 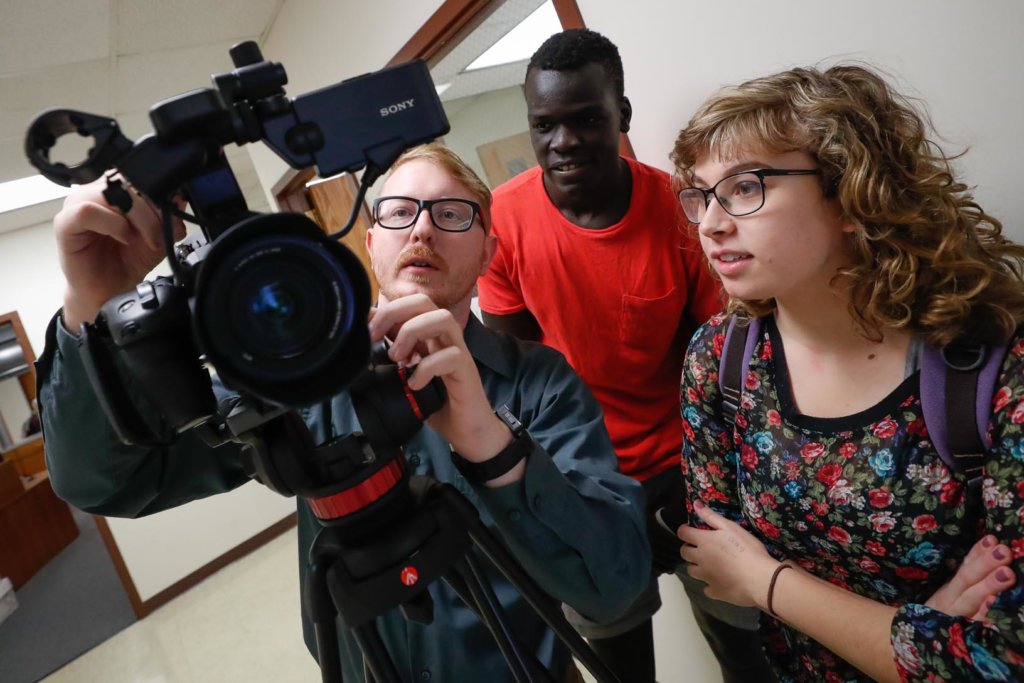 An associate professor in the department of communication, Rosdail has spent the past five-plus years teaching University of Nebraska at Kearney students the ins and outs of video production – from the basics of operating a camera to editing and creating their own films or news packages.

“I want to stir a passion in students, and hopefully that passion leads to a career,” said Rosdail, who works with students pursuing degrees in advertising/public relations, journalism, multimedia, sports communication and other majors. His students have partnered with local nonprofits to produce advertisements, they create news content that’s uploaded to YouTube, and many of them have worked in production assistant roles for Rosdail’s films – shooting b-roll, transcribing interviews, creating promotional materials and handling various other tasks.

“I want to get students involved with my films whenever possible,” he said.

Rosdail also uses his talent to enhance his colleagues’ research. As the only documentary filmmaker among the UNK faculty, he’s often sought out for collaborations that benefit from his creativity.

“I love working with other faculty members because I don’t have to be an expert on anything. That’s the best part,” Rosdail said with a smile. “I learn a lot from them about their methodology, and I hope they learn from me how to promote their research in more accessible ways.”

Many researchers write papers for academic journals, Rosdail noted, but “most of the people who will read them are academics.” By creating a short documentary or film, that audience is expanded to other demographics.

One of Rosdail’s first projects at UNK was a partnership with associate history professor Jeff Wells that examined the history of the Kearney Army Air Field and Kearney community during World War II.

The project, which also involved several UNK students, digitized items from the Buffalo County Historical Society Trails and Rails Museum to create a website dedicated to this local history. These items included hundreds of photographs, thousands of pages of Kearney Army Air Field government documents and audio files from an air field reunion in 1988, when historical society volunteers conducted interviews with veterans.

Rosdail’s portion of the project, called “Kearney Goes to War,” was a documentary film that utilized historic photos and audio files, as well as interviews with people who had connections to the air field. The venue was filled to capacity during two screenings of the documentary at The World Theatre in downtown Kearney. 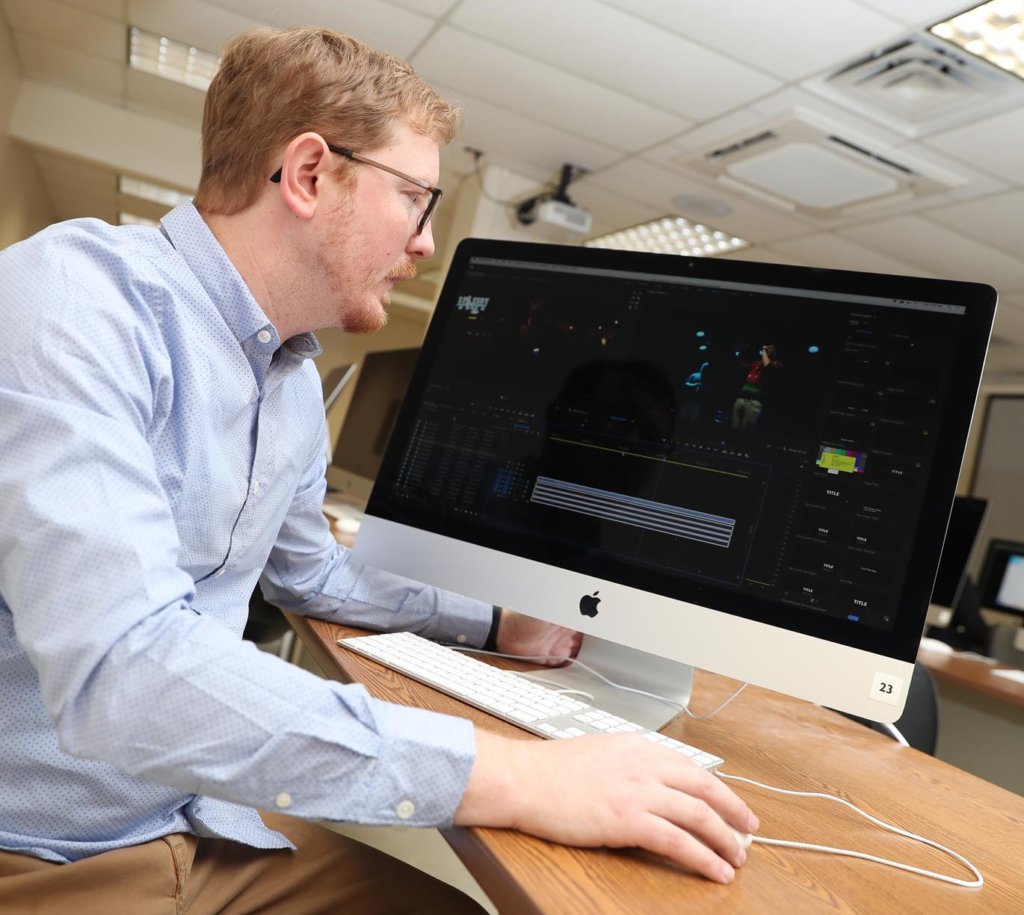 The 37-year-old took a similar approach when he produced “Stone Mansion on the Prairie,” which tells the story of the G.W. Frank Museum of History and Culture during two significant periods – as the private home of George Sr. and Phoebe Frank in the late 1890s and as part of the Nebraska State Hospital for Tuberculosis from 1912 until 1972.

Rosdail spent about two years creating the 50-minute documentary, which premiered in April 2018 as part of a reveal event for the reinvented museum, located on the west side of the UNK campus.

The first half of the film focuses on the rise and fall of the Frank family and their vision for Kearney.

Local architect George William Frank Jr. designed the lavish house – one of the earliest in the Great Plains with electricity when it was completed in 1890 – for his parents, George Sr. and Phoebe Frank.

The second half of Rosdail’s documentary features stories from the Nebraska State Hospital for Tuberculosis, which operated in Kearney for 60 years and included the Frank house and several other buildings on what is now UNK’s west campus.

Rosdail worked alongside then-Frank Museum Director Will Stoutamire to collect firsthand accounts from people impacted by the hospital, including family members of former patients and employees.

His film, which involved more than a dozen UNK students, also captured the process as Stoutamire led a project that reinvented the museum by tackling much-needed restoration work, adding new displays and technology and reviving the building’s history as part of the state tuberculosis hospital through a permanent exhibit.

Rosdail produced a second documentary, “A Plague on the Plains,” that focuses entirely on the Nebraska State Hospital for Tuberculosis. It aired in February and March on NET. 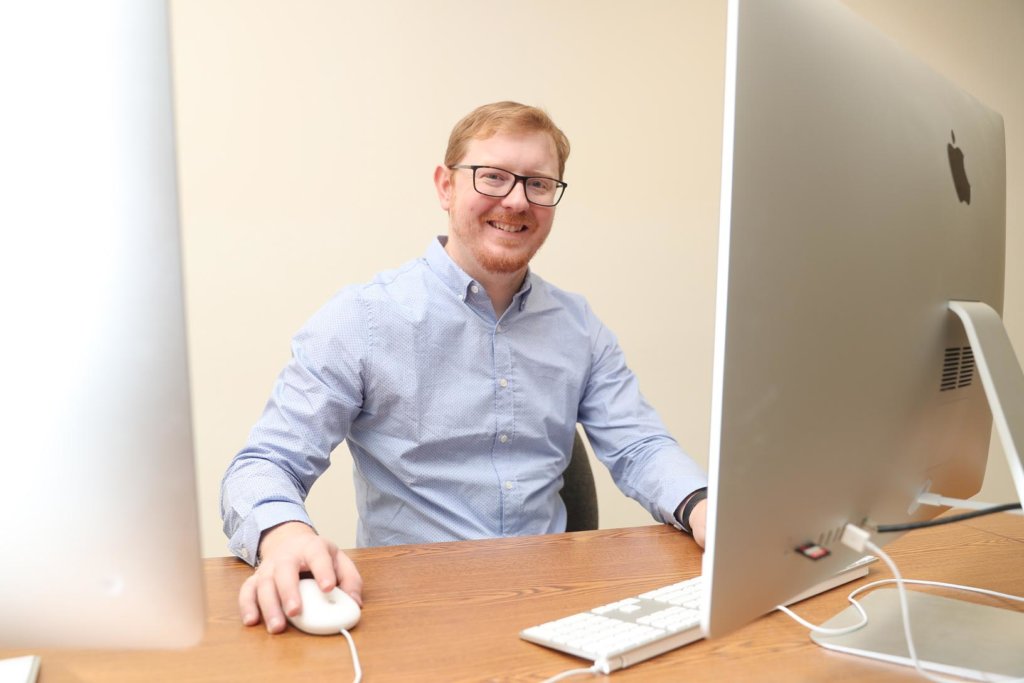 When Rosdail wanted to venture outside his comfort zone, he reached out to Mary Harner, an associate professor in the departments of communication and biology.

They worked together in 2016-17 to film and produce “Life on the Gila,” a documentary highlighting New Mexico’s Gila River and its importance to the region. It was Rosdail’s first “nature film.”

Nestled in southwestern New Mexico in the headwaters of the Colorado River system, the Gila is one of the most dynamic and natural-flowing rivers in the U.S.

“Because of that, it has a very diverse ecosystem,” Rosdail said. “Very unique types of wildlife are attracted to the river.”

The 25-minute film focuses on residents’ connections to this river and their visions for its future, exploring both the pros and cons of proposed projects that would alter the river to support agriculture and development.

“I was really interested in a story that captured a lot of different perspectives,” said Harner, noting that Rosdail’s expertise helped them explain both sides of the issue.

“He didn’t have any preconceived ideas and could talk to people pretty openly,” she said. “I thought that was really valuable. We were able to capture a lot of different voices during this snapshot in time.”

“Life on the Gila” premiered at the Santa Fe Independent Film Festival in 2017 and was selected for the Docs Without Borders Film Festival and Colorado Environmental Film Festival. Rosdail and Harner also showed the film when they hosted the River Stories Media Festival at The World Theatre in 2018.

“Good storytelling adds value to all the work we do,” Harner said. “Collaborating with people who bring those skills as part of their background and professional training makes it possible for others to share their message in new ways.” 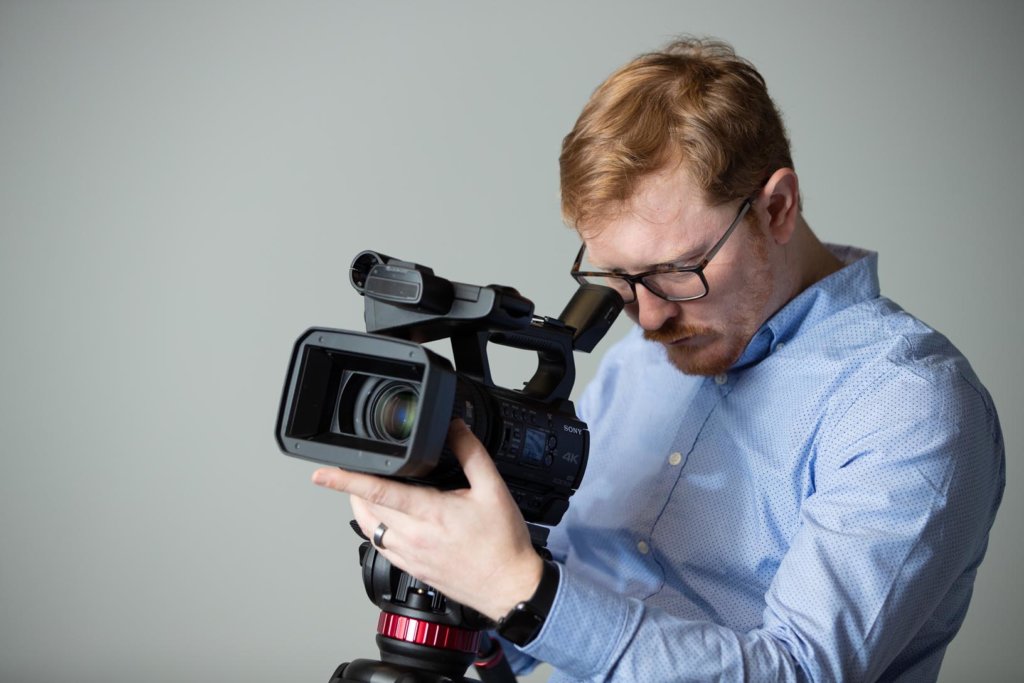 Rosdail’s goal as a filmmaker is to take audiences on a journey that both informs and evokes emotion.

One of his most recent projects does exactly that.

For the past two-plus years, Rosdail has been working with UNK associate Spanish professor Michelle Warren and archivist Laurinda Weisse to document the stories of Latin American immigrants living in central Nebraska.

The project, which was conceived shortly after the 2016 election of President Donald Trump, is a response to the ongoing debate over immigration laws in the U.S.

“I definitely wanted to make a film about this moment in time and these people living in uncertainty,” Rosdail said. “This was a good opportunity to highlight a population I think a lot of people don’t feel empathy for.”

Titled “Coming to the Plains,” the project focuses on nearly two dozen Latinos who immigrated to central Nebraska, including some who were brought to the country as young children.

The UNK team interviewed immigrants from all walks of life – students, parents, a high school custodian, meatpacking plant worker, immigration lawyer and grocery store owners, among others – asking them about their decision to come to the U.S., how they’ve acclimated and the obstacles they face. Each interview will be documented in English and Spanish, with help from UNK’s Spanish translation and interpretation program.

Their goal is to humanize the immigration debate, putting people in the shoes of those impacted by U.S. policies. “Coming to the Plains,” which is in the editing phase, will debut this spring as an installation at the Frank Museum.

Other plans include podcasts, web videos, academic articles and a traveling exhibit that can be displayed in communities across the state.

“Hopefully you will come away from it having felt something,” Rosdail said. “If it doesn’t change minds, it will at least help people see the other side.”

Calling him an “immaculate professional and perfectionist,” Warren praised Rosdail for his work on the project.

“Shy to brag about any of his accomplishments, he passes himself off as a ‘videographer,’ claiming that ‘cinematographer’ sounds too fancy,” she said. “Jacob Rosdail is without any doubt a true cinematographer, and his work has raised our Latinx oral history project to a level where it will touch lives and influence public opinion on the reality central Nebraska’s immigrants face.” 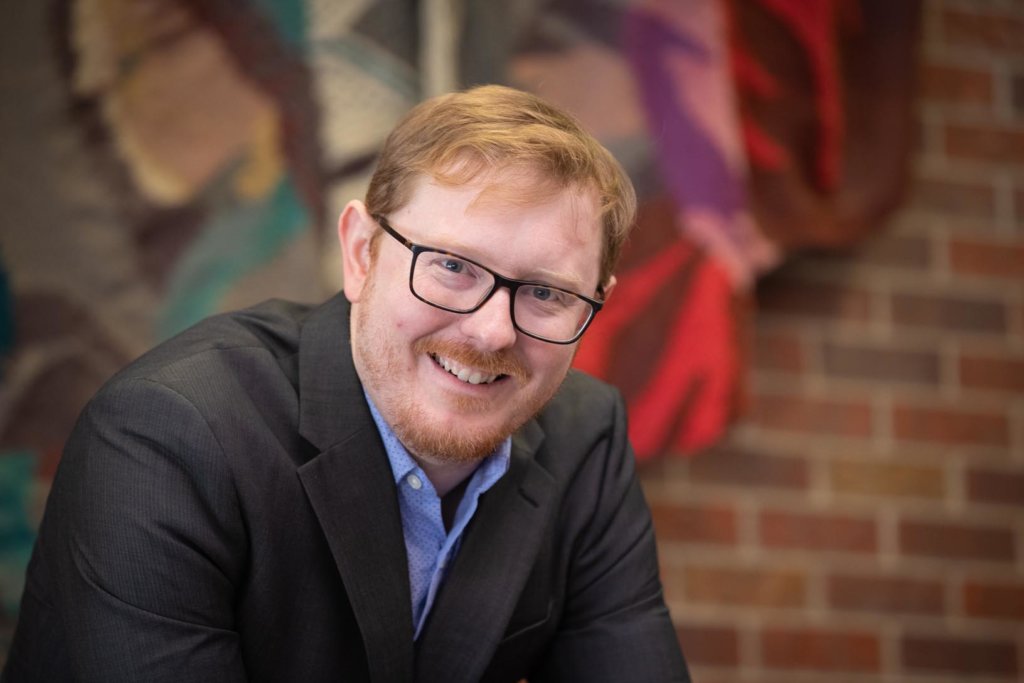