KEARNEY – Esthefany Lopez-Cruz had a special message written on her graduation cap during the University of Nebraska at Kearney’s winter commencement.

On a blue and white background representing the Honduran flag, Lopez-Cruz proudly displayed a phrase she heard her mother say hundreds of times when she was growing up.

The message, which translates to “Your future depends on you” in English, was dedicated to her parents, Delia and Juan, who were in the audience Friday as Lopez-Cruz walked across the stage inside UNK’s Health and Sports Center to receive her bachelor’s degree in Spanish translation and interpretation.

Her younger brother David, husband George and 2-month-old son Ismael were also there as Lopez-Cruz became the first member of her family to graduate from college.

The 22-year-old called the moment her greatest accomplishment.

“I don’t know how to express the happiness I feel in my heart knowing my efforts and my parents’ efforts paid off,” she said. “Thanks to them, I have a good life and I’ll be able to have a better future. At least they know the suffering and everything they went through were worth it.”

Honduras was particularly hard-hit by the Category 5 storm, the second-deadliest Atlantic hurricane on record. Floods and mudslides washed away entire villages and most of the country’s crops and infrastructure were destroyed.

“My parents were left without anything,” Lopez-Cruz said.

Unwilling to raise their young child in extreme poverty, Delia and Juan decided to leave Honduras and immigrate to the United States when their daughter was less than 2 years old.

They came to the U.S. as refugees, eventually settling in Hastings, where they started a new life under Temporary Protected Status from the U.S. government.

The federal immigration program allows people from countries impacted by war, natural disasters or other dangerous conditions to legally live and work in the U.S. According to the Pew Research Center, roughly 317,000 people from 10 countries currently have this protected status, including 57,000 Hondurans.

In Hastings, Juan worked as a truck driver until he was injured in an accident. He’s currently studying for his GED. Delia, who was also hurt at a previous job, works at a local fast-food restaurant.

They both struggled with the language barrier after relocating to the U.S., and Lopez-Cruz recalls times when they weren’t accepted by other community members because they spoke Spanish.

“That was very frustrating for me growing up, having to see my parents deal with that,” said Lopez-Cruz, who translated documents and interpreted for her parents while she was still learning English.

She knew she wanted to pursue a career advocating for and assisting other non-English speakers.

A high-growth employment area, the program prepares students for job opportunities in a variety of fields, including government, legal, medical and customer relations.

“It’s a great program,” Lopez-Cruz said. “I loved all my Spanish teachers. Not only did they build that relationship between teacher and student and help me out academically, they were always there for me when I needed someone.”

During her time at UNK, Lopez-Cruz served as a volunteer interpreter at a nonprofit clinic in Kearney, where she helped patients communicate with medical professionals.

“I once had a lady in tears telling me how thankful she is for the people doing this job,” said Lopez-Cruz, who also completed an online medical interpreter certificate course through ALTA Language Services.

“It’s not about the money,” she said. “I feel satisfaction knowing I’m helping my community.”

Michelle Warren, an associate professor of Spanish at UNK, described Lopez-Cruz as a smart student with an “incredibly strong work ethic.”

She demonstrated that through her commitment to college.

A College Opportunity Scholarship from the Susan Thompson Buffett Foundation covered a portion of the costs, but Lopez-Cruz wasn’t eligible for federal financial aid because of her Temporary Protected Status. She worked a full-time job to pay the bills and commuted from Hastings to Kearney during her final two years at UNK.

Her dedication was rewarded when she recently accepted a job as a medical interpreter at CHI Health St. Francis in Grand Island.

“Esthefany is one of the sharpest interpretation students we have put on the market,” Warren said. “As a bilingual and bicultural person, she will facilitate best care practices for the patients she sees.”

Lopez-Cruz, who married her husband in 2016, plans to pursue further certification as an interpreter and she also hopes to become a permanent U.S. resident.

A few years from now, she’ll be the one sharing that special message with her own child.

“I want to set an example for my son so he’ll go to college and have an even better future,” Lopez-Cruz said. 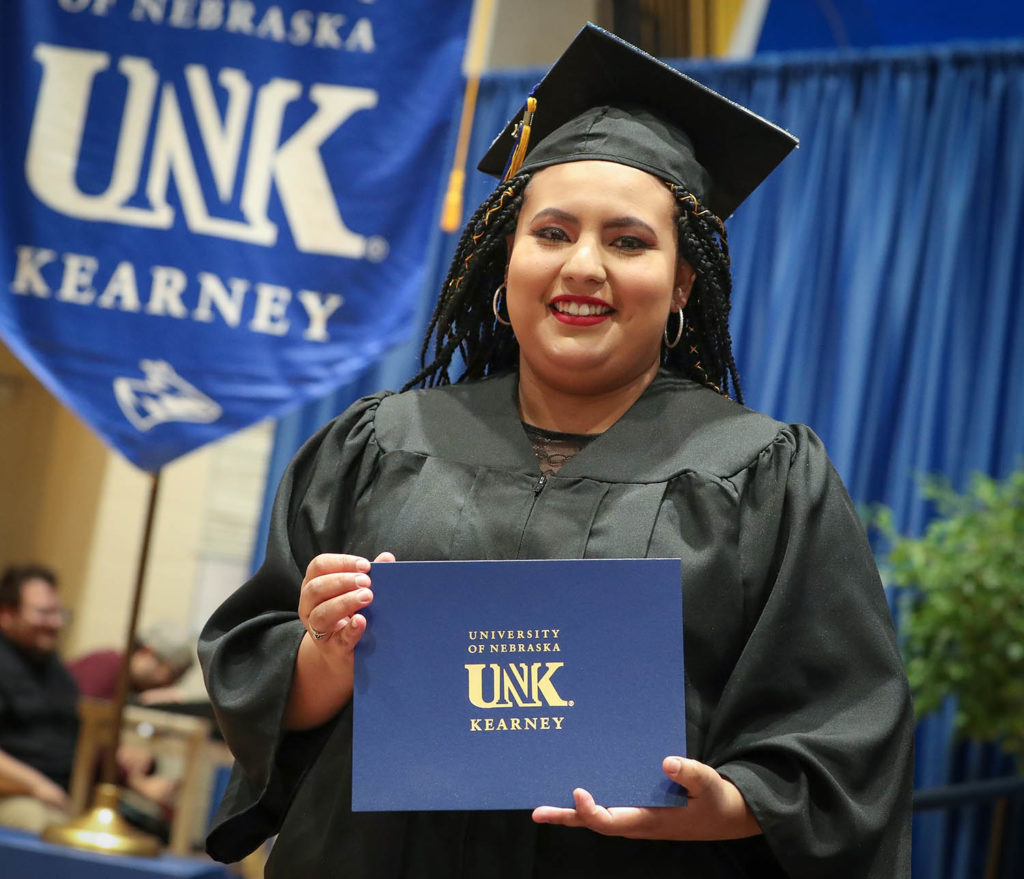