The 32-team tournament – soccer’s biggest event – took place in 11 different cities across Russia and was broadcast live in every territory around the world.

None of that would have been possible without Dick Wiles, a University of Nebraska at Kearney graduate who led the team that oversaw the development and operation of telecommunication and information technology systems at the past seven men’s World Cups.

It’s a pretty remarkable accomplishment for somebody who knew very little about the sport when his career first began.

A Kearney native, Wiles didn’t even intend to enter the IT industry when he graduated from UNK in 1977 with a bachelor’s degree in education. He wanted to be a high school teacher and football coach.

“I even had the driver’s ed endorsement and everything, so I was heading right to teaching,” said Wiles, who was talked into staying at UNK to pursue a master’s degree in math education with an emphasis in computer science.

As a graduate student, Wiles was the primary contact for IT companies recruiting students on campus. Electronic Data Systems (EDS), one of the top IT companies in the U.S. at the time, was looking for someone to design and develop systems for First National Bank in Lincoln. The account manager wanted Wiles to take the job.

“He made me an offer I couldn’t refuse,” said Wiles, who earned his master’s degree in 1979.

Wiles worked as a systems engineer for EDS, then he was promoted to a leadership position within the Plano, Texas, company’s entry-level training program. He and his wife Nancy moved to Dallas in 1984, and their oldest son signed up for youth soccer. Wiles, who played football and basketball at Kearney High School, was asked to coach the team.

“That’s the first I’d ever been exposed to the sport,” he said. “I had no understanding of the importance of a World Cup to the rest of the world when I was coaching my son in Dallas, Texas.”

Wiles was managing EDS’ global training program – which had campuses in Texas, Michigan, Maryland, London and Tokyo – when the company signed a sponsorship agreement to provide IT services for the 1992 Olympic Games in Barcelona, Spain. To promote this partnership in the U.S., the company also needed a relationship with the U.S. Olympic and Paralympic Committee. Wiles was tasked with the assignment.

He and Nancy moved to Colorado Springs, Colorado, where the U.S. Olympic and Paralympic Committee is headquartered, and his nearly three-decade run in the sports world began.

As a senior manager for EDS, Wiles oversaw the delivery of IT services for a number of major sporting events and organizations, including the 1992 Olympics, Formula One events in Australia, NASCAR, USA Cycling and the 1994 and 1998 World Cups.

For racing and the Olympics, he was responsible for the timing, scoring and results management systems. For World Cups, the job was much larger.

“There’s a whole volume of IT-related services and infrastructure that are necessary to put on an event like the World Cup,” Wiles said.

Systems are needed to manage security, volunteers and transportation, and telecommunication and IT infrastructure must be designed, installed and operated at the stadiums, hotels, training sites and other locations.

“It’s like putting in the infrastructure for a Fortune 500 company for the period of a World Cup then taking it away within a month of when it’s over,” Wiles said. “That’s the magnitude of what we’ve done.”

The process starts at least four years before each World Cup and continues through the event. Wiles compares it to building a house.

“If you focused on the magnitude of what you’re doing and the magnitude of the event, you’d fail,” he said. “You have to focus on the next thing that needs to be accomplished and what the overall goal is.”

After leaving EDS in 2000, Wiles co-founded Eurotech Global Sports AG, a Switzerland-based company that primarily focused on providing IT services for the 2002, 2006, 2010 and 2014 World Cups. When FIFA decided to handle most of those services internally, he was hired in January 2015 as the organization’s chief information officer and head of information and communications technology.

Wiles was a resident of Switzerland, where FIFA is headquartered, from 2015 through 2018, and he spent much of last year in Russia preparing for the most recent men’s World Cup. FIFA, the governing body of world soccer, organizes a number of international competitions and Wiles was also involved with several Women’s World Cups throughout his career.

Although he was away from home more often than not, the career did have its perks.

Wiles’ family was able to join him at some of the World Cups and he’s visited enough countries that coming up with an exact number is just a guess at this point.

“I’ve been places I never thought I would be when I started this initiative,” said Wiles, who left FIFA in November 2018 but continues to do some consulting work.

The 64-year-old still lives in Colorado Springs with his wife.

“Now I get a chance to enjoy my 11 grandchildren, which is great,” he said. 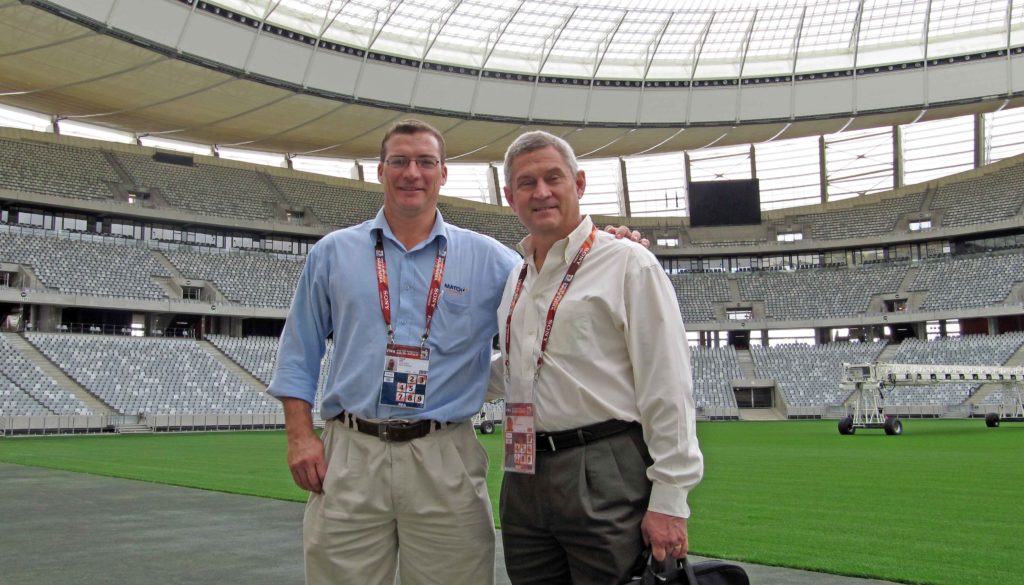 Dick Wiles, the 2019-20 Ron Landstrom Executive-in-Residence at UNK, will discuss his career and the growing role technology plays at major sporting events 11 a.m. Thursday (Sept. 26) at the Nebraskan Student Union Ponderosa Room. His presentation, which is free and open to the public, is part of the JA Baldwin Free Enterprise Lecture Series.

The Ron Landstrom Executive-in-Residence program brings successful business executives to UNK to talk with students about best business practices, as well as their personal career paths and lessons learned.