Faviola Gonzalez was a senior in high school when Hurricane Maria struck Puerto Rico in September 2017.
“We didn’t have electricity. We didn’t have water. We couldn’t get out of our house for a week,” she said.
Gonzalez committed to UNK sight unseen and arrived on campus for the first time in August 2018, a couple weeks before she played in her first tournament for the Lopers.

Faviola Gonzalez caught the coach’s attention with her email etiquette.

Rodehorst was one of about 20 collegiate coaches Gonzalez reached out to during her senior year at Thomas Alva Edison School in Caguas, Puerto Rico. She was looking for a school with a women’s golf program where she could also major in molecular biology.

UNK checked both boxes. So she sent the message – along with several others – and waited.

“Coach Rodehorst was the first one to reply to me,” Gonzalez said.

It’s fairly common for high school players to contact collegiate coaches out of the blue, Rodehorst said, but this email stood out.

Like an employer reviewing a resume, the UNK coach immediately noticed Gonzalez’s professionalism and grammar. Then he took a look at the videos showcasing her abilities on the golf course.

“Her talent kind of caught my eye,” Rodehorst said. “I identified her as someone who could help us right away.”

The two began chatting over the phone, creating a connection from 2,500 miles away. They wouldn’t meet face to face until Gonzalez had already enrolled at UNK.

“That’s probably the only time that will ever happen,” Rodehorst said of the unique situation.

Gonzalez was a senior in high school when Hurricane Maria struck Puerto Rico in September 2017.

The Category 5 storm caused widespread destruction, claimed countless lives and left the entire island without electricity or access to many resources.

“We didn’t have electricity. We didn’t have water. We couldn’t get out of our house for a week,” Gonzalez said while describing the “horrible” situation.

Food, water and ice were rationed, people waited an entire day to get gasoline and three weeks passed before Gonzalez could communicate with family members over the phone. She missed an entire month of school following the hurricane, which also prevented her from visiting Nebraska.

Gonzalez committed to UNK sight unseen and arrived on campus for the first time in August 2018, a couple weeks before she played in her first tournament for the Lopers.

“When I came for move-in day, that was my first time looking at everything,” said Gonzalez, whose parents and younger sister relocated to Palm Harbor, Florida, shortly before she moved to Kearney.

UNK and Kearney were everything she hoped they’d be, according to Gonzalez, who grew up in Cayey, Puerto Rico, population 50,000.

The same can be said about Gonzalez, a soft-spoken 19-year-old who developed her passion for golf at a young age.

At 5-foot-1, Gonzalez is the shortest member of the UNK women’s golf team, but stature has never held her down.

“That’s part of the reason why I decided to play golf,” she said. “You don’t need height.”

Gonzalez started golfing at age 9 through a free junior program and quickly fell in love with the sport. She quit soccer, signed up for private golf lessons and began competing in tournaments. By high school, she had also given up swimming to focus entirely on golf.

Those decisions paid off big time.

“It was a really great experience because I have many friends who never got to be a part of the national team because they’re very selective,” Gonzalez said. “That’s a very competitive spot to get. I feel very proud that I made it four years.”

One of her toughest challenges came last fall, when Gonzalez got her first taste of the Midwest. While her teammates were in shorts enjoying the 60-degree weather, Gonzalez was bundled in layers wondering how she’d hit a golf shot.

“There was definitely a little culture shock,” Rodehorst joked.

“I had never golfed in cold weather,” she said. “That was definitely a mental challenge to concentrate on my game without thinking about the fact that I’m freezing.”

After making the adjustment, Gonzalez became an instant contributor for the Lopers.

“Faviola is a really solid player who’s improving all the time,” Rodehorst said. “She’s definitely on track to reach anything she wants. Her swing is really solid, and she doesn’t necessarily have a weakness in her game.” 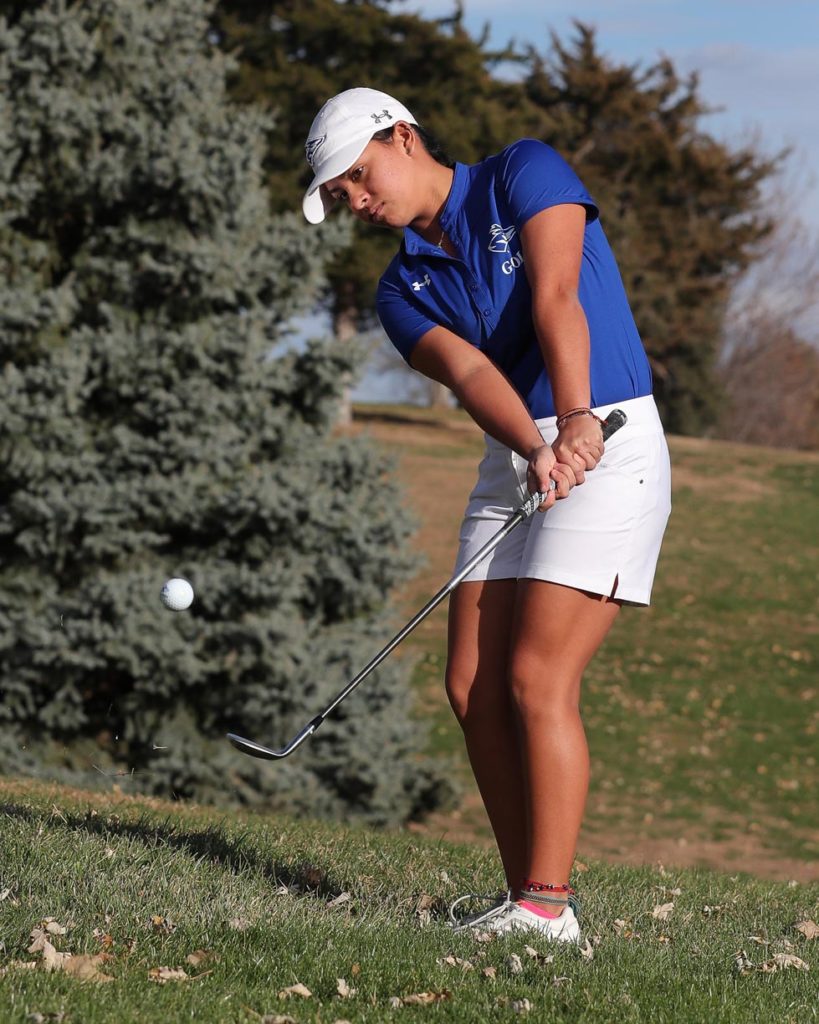 As a freshman, Gonzalez had the sixth-best season stroke average (80.1) in school history among players with 12 or more rounds, finishing strong during the spring.

After carding a season-best 230 over three rounds at the Hardscrabble Invite in Arkansas, Gonzalez led the Lopers with a 236 at the NCAA Central Regional in Oklahoma, tying for 29th place.

UNK was runner-up in two tournaments, third in another and regionally ranked all season. The Lopers qualified for the NCAA Central Regional for the third consecutive year after having never reached the postseason tournament prior to 2016-17.

This year, they’re raising the bar.

“Nobody has higher expectations for us than we do,” Rodehorst said. “I know it kind of sounds like coach-speak, but we can be as good as the girls want to be. If we keep working hard, there’s really nothing we can’t accomplish.”

UNK opened the season Sept. 3-4 with a third-place finish at the Central Region Fall Preview in Missouri, breaking the school records set last season for lowest 18-hole (294) and 36-hole (607) scores. Gonzalez and teammates Nia Station and Brandi Lemek each shot a 5-over-par 149 to tie for sixth place, with career-best 18-hole rounds of 72, 71 and 70, respectively. There have been only nine 18-hole rounds of 72 or better in UNK women’s golf history, including Carla Dobchuk’s school-record 69 shot in fall 1998.

The Lopers followed that performance with another third-place finish Sept. 16-17 at the Golden Bear Classic in Minnesota, where Gonzalez fired a 158 to tie for 13th place.

Heading into this week’s MIAA Preview – UNK’s first home event since March 2018 – Gonzalez is focused on doing everything she can to help the Lopers achieve one of their goals – winning a tournament for the first time since spring 2015.

With the high temperature expected to reach the mid-80s for Tuesday’s opening round, Gonzalez will definitely feel at home when she tees it up at Awarii Dunes Golf Course.

UNK is hosting the MIAA Preview on Tuesday and Wednesday at Awarii Dunes Golf Course. Tee times begin at 9 a.m. and run through 10:30 a.m. for the 12-team event.
Because of inclement weather in the past, it’s the Lopers’ first home tournament since March 2018.
“I’m excited to play at Awarii and not in 40-degree weather,” UNK coach Shawn Rodehorst joked.