KEARNEY – The UNK Dining Services staff arrived at work that morning expecting to serve about 175 youths participating in volleyball and band camps on campus.

Then the phone rang.

Michael Christen, director of business services at the University of Nebraska at Kearney, had an unexpected request.

The July 9 flooding that inundated much of south Kearney had forced a number of local residents out of their homes and led to the evacuation of several hotel properties. UNK was offering temporary housing for those displaced by the disaster and they’d need a place to eat since their vehicles were underwater.

Representatives from Sodexo, which signed on as UNK’s new dining services provider less than two months ago, didn’t hesitate in their response.

“When a disaster happens, it’s not even a question of why we should help, it’s what do we need to do to make sure we can help and be part of the community,” said Michael Fleming, a Sodexo district manager working in Kearney last week.

“We’re a partner,” Fleming added. “We’re not just the third-party food service vendor on campus that does its own thing. This is UNK Dining. That’s who we are. We represent the university and we represent this town.”

The Dining Services staff sprang into action shortly after the first evacuees began arriving on campus around 10 a.m., creating a menu that could serve roughly 400 people – more than double the number they anticipated when the day began. At 5 p.m., the doors to The Market @ 27th dining hall opened and about 200 hungry flood victims feasted on a buffet of pizza, hamburgers, sandwiches, pasta dishes and salads, as well as gluten- and allergen-free options.

“They all stepped up,” Fleming said of the staff, most of whom have been with UNK Dining Services for multiple years. “In the last month and a half of them being on the Sodexo team, they’ve demonstrated nothing but professionalism and how good they are at what they do.”

In the days following the flooding, UNK provided free housing and meals for more than 330 people, including J.P. Singh, the new general manager hired by Sodexo to lead UNK Dining Services. He was in Kearney for a final interview last week, and the flooding kept him here a couple extra days.

A total of about 1,400 meals – breakfast, lunch and dinner – were served to area residents and travelers impacted by the disaster.

UNK senior Koree Schueler was among the many people grateful for this service.

“It was such a relief to have this so we didn’t have to worry about food,” said Schueler, who evacuated her Kearney home and a local hotel along with her husband and 2-year-old daughter. “I’m impressed with how fast they put everything together.”

The family was still on campus Friday as they worked to restore their flood-damaged home.

“It’s quite the experience,” Schueler said.

Dining Services provided meals for flood victims through the weekend as UNK transitioned people from its residence halls into other housing options. About 20 employees of Kearney hotels will remain on campus long-term.

Sodexo also saved the day for a few couples whose wedding plans were interrupted by the weather. Loper Catering, another service offered by the company, was hired to prepare food for three weddings previously booked with Kearney hotels that experienced flooding, including a 190-guest dinner and reception held Saturday in UNK’s Nebraskan Student Union.

“In our industry, we serve others, that’s what we do,” Fleming said. “You don’t get into this business unless you’re wanting to serve people and help make a difference. Every one of these people who are on this team have proven that, especially over the last week.” 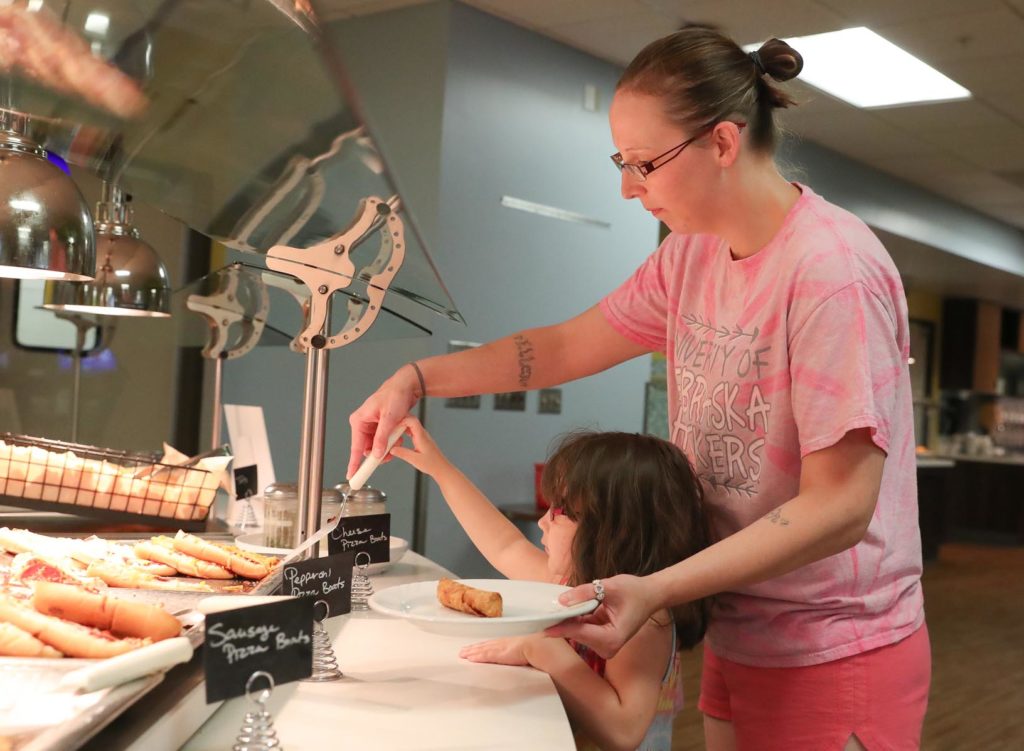