“Quietly, generously and under the radar, so to speak, they continue to make one positive difference after another for the benefit of UNK and the Kearney community.”
– UNK Chancellor Doug Kristensen

They don’t brag about their contributions to the Kearney community, and they certainly aren’t expecting anything in return.

The couple would rather be sitting in the stands at a University of Nebraska at Kearney sporting event or listening to a musical performance in the Fine Arts Building than walking on stage during commencement to accept a prestigious award.

Their impact, however, is significant.

The Dulitzes were honored Friday (May 3) with the Ron and Carol Cope Cornerstone of Excellence Award in recognition of their community service and support of UNK, higher education and the Kearney area. The award, approved by the University of Nebraska Board of Regents, is presented annually during spring commencement as UNK’s highest honor.

“Like the Copes, after whom the award is named, the recipient must be a true ‘cornerstone’ of our university,” said Chancellor Doug Kristensen, who called the Dulitzes “VIPs” in that area.

“Quietly, generously and under the radar, so to speak, they continue to make one positive difference after another for the benefit of UNK and the Kearney community,” Kristensen said.

The Dulitz family has owned Nelson’s Furniture, a downtown Kearney anchor, since 1973. Their connection to UNK goes back even further.

Jerry and Nancy first met on the campus.

He was a business student and member of the Caledonia (now Sigma Phi Epsilon) fraternity, working part time at the furniture store Fletcher Nelson opened in 1946. She was a charter member of the Gamma Phi Beta sorority studying physical education.

After they married in 1964, Jerry left school to work at the business full time while Nancy finished her degree. When she was offered a teaching position in Los Angeles the following year, they packed up their belongings and headed to the West Coast.

The couple spent eight years in California, where Jerry advanced to a manager role with a local furniture store chain, then Nelson called with a proposition. The Kearney businessman was looking to retire and wanted Jerry to take over.

“We always liked Kearney, so we moved back and bought the store,” said Jerry, a Scotia native.

Nelson’s Furniture, one of the oldest continuously operating businesses in Kearney, has expanded several times since then, and the Dulitzes opened additional locations in Lexington, Hastings and Grand Island.

“It worked out well,” Jerry said.

The Dulitzes are longtime supporters of UNK, extending their generosity and enthusiasm to both academic and athletic programs.

They’re founding members of the Loper Football Backers, a volunteer organization that has raised more than $1.72 million for student-athlete scholarships, and they’ve been involved with several other UNK fundraising efforts over the years.

Jerry and Nancy are regulars at UNK sporting events, whether they’re sitting courtside at the Health and Sports Center or cheering on the Lopers at Cope Stadium. They attend many road contests, as well.

The Dulitzes also share a passion for the arts, at UNK and in the community.

Nancy, who grew up in York, is a member of the Kearney Concert Association Board of Directors and a volunteer for Crane River Theater. The couple are active members of Zion Lutheran Church, where Nancy is part of the choir, and they support the Merryman Performing Arts Center, Kearney Symphony Orchestra and Platte River Singers.

In 2012, they received the UNK Alumni Association’s Jim Rundstrom Distinguished Service Award for their significant role in refurnishing the campus Alumni House.

Displaying their humility, the Dulitzes won’t take credit for that award either.

“We just really enjoy living here,” said Jerry, who served on the Platte Valley State Bank Board of Directors and Kearney Civil Service Commission. “It’s such a fabulous community and it’s a great university. To see UNK grow from a small teachers college to a university has been really exciting.”

Nancy, a member of the Senior College of Central Nebraska, called UNK “a cornerstone of the community” and a big part of their lives.

“We have great friends at UNK, all the way from the top down,” she said. “Most of the people we know in Kearney we know from meeting them either at or through something at the university.”

The Dulitzes have two children and four grandchildren. Their son Mike, also a UNK graduate, lives in Kearney. He’s the “heir apparent” to the family business. Daughter Jeri Altman, a University of Colorado graduate, lives in Longmont, Colorado, with her husband Brian. 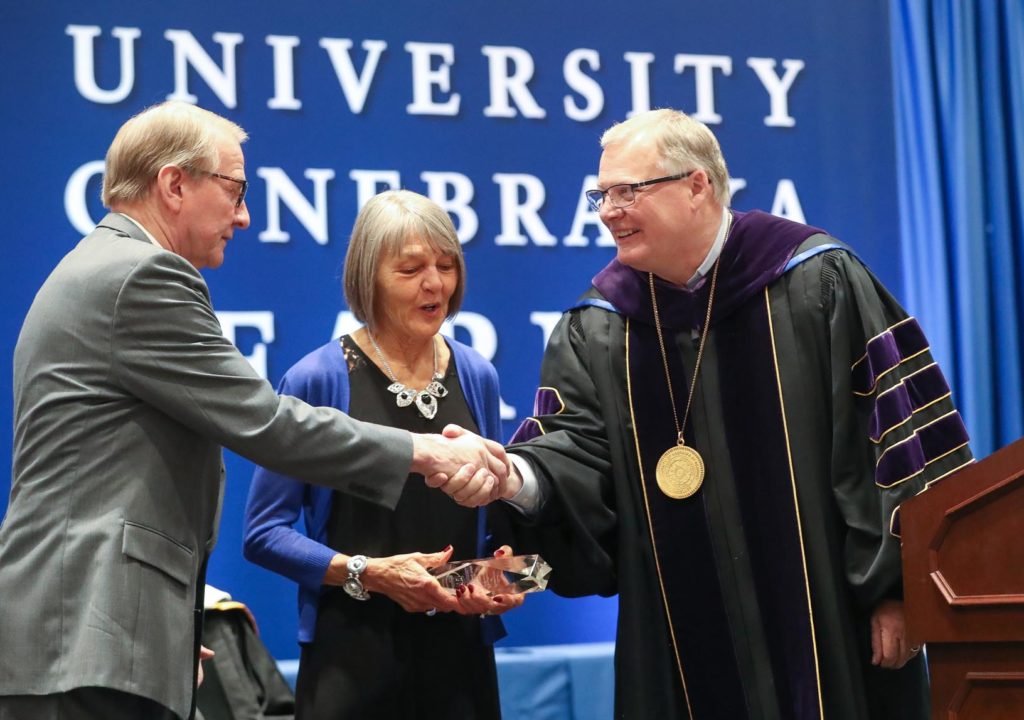 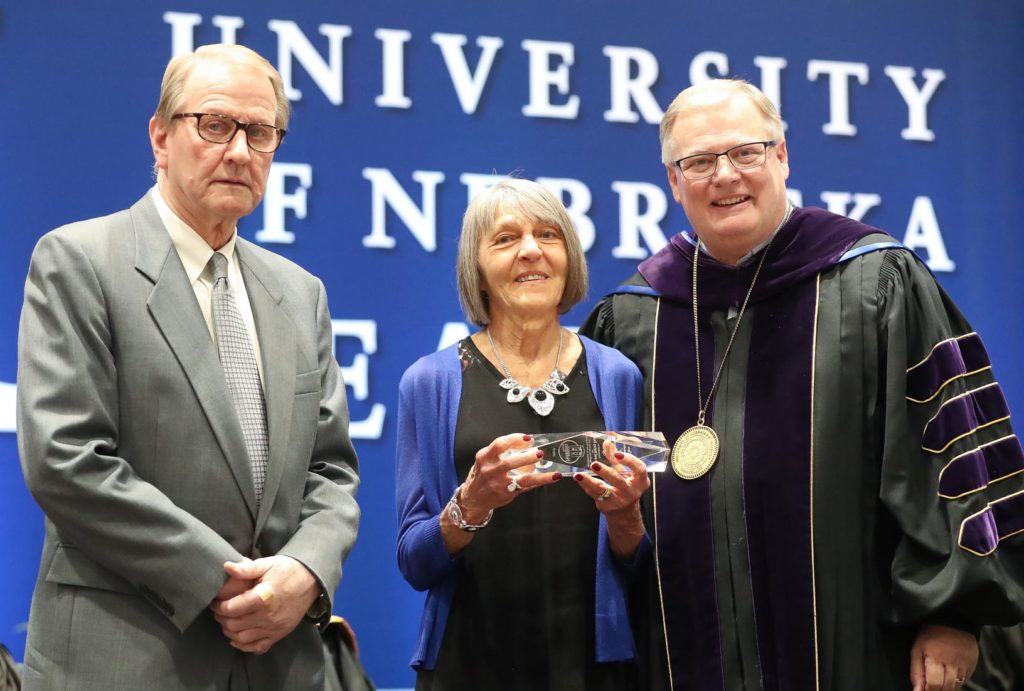