KEARNEY – When David Bauer announced his upcoming retirement, he included lyrics from Frank Sinatra’s “My Way” in a message to his students.

Like the legendary song released five decades ago – one year after Bauer first stepped in the classroom as a graduate teaching assistant – the end is near for the 73-year-old’s career in music education. He’ll face the final curtain April 28, when the longtime director of choirs conducts his last concert at the University of Nebraska at Kearney.

Bauer isn’t excited about retirement, but he can leave UNK knowing he did things his way, sharing a genuine love for music with his students and audiences across the world.

Passionate is a word used time and again to describe Bauer, who joined UNK in 1984 and helped transform the vocal music program, and countless young singers, over the next 35 years.

Bauer directs all four UNK choirs – three of which he created – while teaching choral conducting and music education and maintaining a voice studio. His students performed for Bill Clinton when the president visited Kearney in December 2000, and they’ve sung at Carnegie Hall and the Mormon Tabernacle and toured in Europe, Brazil and Argentina.

There have been plenty of big moments and numerous accolades during his career, but Bauer was never looking for a plaque to hang on the wall.

“It’s way deeper than that,” he said.

His reward comes from the students.

“When the choir sings here – and it can be men’s chorus, women’s chorus, Collegium – sometimes there’s a sound, for me there is nothing else like it in the world,” Bauer said. “It’s a moment of awe. It’s that moment when what I think the composer wished for and what we recreate is just perfect.”

When his students share that feeling, Bauer knows he’s done something truly impactful.

“David had a huge influence on my career,” said Moyer, who graduated from UNK in 2001. “He recruited me to UNK from Colby Community College in Kansas. When I came to visit the campus, I had the opportunity to listen to the Choraleers rehearse and I knew it was a choir I needed to be a part of.”

Moyer, who sang with the Choraleers and Vocal Collegium, is in his 18th year as a choir director, including 11 years at Kearney High School. Bauer has been there to support him every step of the way.

“He has been a great mentor for me throughout my professional career,” Moyer said. “I know that at the end of my concert I can expect to see him walking on stage to visit with me about the performance.”

Bauer’s former students are now leading vocal music programs at schools across the state, and some followed his career path to the collegiate level.

Kelly Miller, who attended UNK from 1988-93, called him a tireless educator, passionate musician and lifelong learner who helped shape her career.

“His influence and connections led me to where I am today,” Miller said. “When I was a burnt-out, young high school band and choir director, re-evaluating my decision to be a music educator, Dr. Bauer connected me with choral composer Z. Randall Stroope. This connection and Dr. Bauer’s endless encouragement post-graduation greatly impacted my career choices.”

Miller is currently an associate professor of music, coordinator of music education and director of three choirs at the University of Central Florida.

“I can honestly say I’m not sure this would have ever happened without the influence of Dr. Bauer on a young music teacher,” she said. “Having learned from his important example, I strive for excellence in all that I do, passing his lessons on to my own future music educators.” 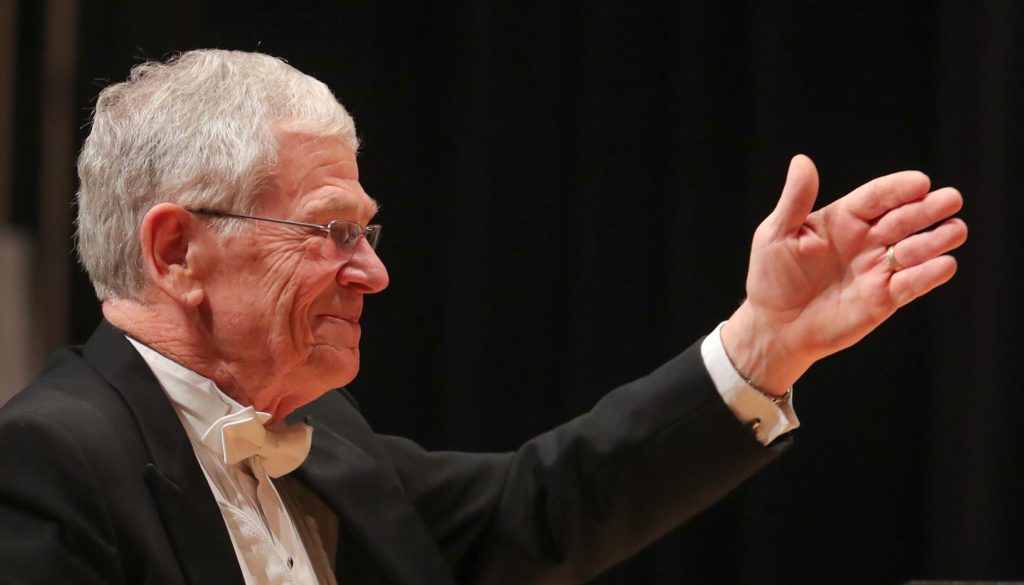 Bauer developed that passion for music at a young age.

He grew up on a dairy farm along the Republican River in northern Kansas, where fishing, sports and performing passed the time.

Raised in a musical family, Bauer played the piano and sang in church as a young boy, often accompanied by his parents.

“Pretty quick I was singing for weddings, funerals and all sorts of things,” he said.

At Clay Center High School, where Bauer was in the band and choirs, he learned from Wayne Snodgrass, a member of the Kansas Music Educators Association Hall of Fame.

For one week each year, Snodgrass, the school’s band director, invited famous musicians to serve as guest instructors, including trumpeters Rafael Mendez and “Doc” Severinsen, clarinetist Buddy DeFranco and percussionist Buddy Rich. The school’s choir accompanists weren’t too bad either, moving on to positions with the Metropolitan Opera in New York and Arizona State University.

“Those are the kinds of people I grew up with,” Bauer said. “I didn’t know any different. You just had to do it right and that’s all there was to it. There were no wrong notes.”

When Snodgrass passed away in 1969, Severinsen, the band leader for “The Tonight Show Starring Johnny Carson,” held a moment of silence on national television in his honor.

After high school, Bauer attended Fort Hays State University on a vocal music scholarship. That’s where he met his wife Ann, who he married in September 1967, pursued a brief collegiate wrestling career and found his calling as an educator – with some assistance from a sports injury.

“The wrestling coach told me that was the dumbest thing I’d ever done, but it ended up being one of the best because I started spending time in the practice room and learned I could do this if I put my mind to it,” he said.

Bauer, who earned a master’s degree from the University of Missouri-Kansas City Conservatory of Music and Dance and doctorate from Arizona State, taught at schools in Kansas for 11 years before making the jump to Northern State University in Aberdeen, South Dakota, in 1982.

A couple years later, he got a call from UNK, where he’s molded two generations of students.

Bauer and his wife have five children, three of whom attended UNK and joined their dad’s choirs. Four of their 16 grandchildren have sung at UNK, and Ann has served as an accompanist for choirs, camps and clinics throughout Bauer’s time at the university.

The couple also volunteer together at Kearney First United Methodist Church, where he’s directed the Chancel Choir since 1986 and she’s been the organist since 1984.

“It’s been special,” Bauer said of the opportunity to work with his wife, who retired a decade ago after a 40-year career as a music teacher and choral director.

He directs the Platte River Singers, a community choir he created in 2013 with members from several communities, works with numerous high school choirs across the area, organizes an All-State Choral Camp each summer and is heavily involved with the annual Honor Band and Choral Clinic, which recently brought 725 students from 96 high schools to campus. He also established a yearly composer, conductor and teacher symposium and workshop at UNK.

An active adjudicator and guest conductor at festivals across the country, Bauer has attended nearly every national and regional American Choral Directors Association convention since 1971, many times with a group of students invited to perform there.

“He is a wonderful educator who will be greatly missed,” said Tim Farrell, chair of UNK’s Department of Music, Theatre and Dance.

Bauer, whose last day at UNK is May 10, will keep working with the Platte River Singers and his church choir after retirement, and he’d like to organize some overseas trips for high school choirs.

There are plenty of hobbies to keep him busy, as well.

He’s an avid fisherman, amateur photographer, collegiate-level wrestling official – something he’s done since 1970 – and a bit of a bird aficionado. Bauer raises 15 different species of pheasant, as well as quail, francolin and partridge, in an aviary on his property northwest of Kearney.

He also wants to spend more time with family members spread out across the country and do more traveling. A river cruise in Europe is planned for June, and he and Ann leave Aug. 16 – 10 days before the fall semester begins – for an Alaskan vacation.

“I think it’s best that I’m not anywhere near here when school starts, because there’s going to be something deep down in me saying, ‘What have I done? Why aren’t I going to class?’” Bauer said. “I’m going to miss it. I’ve already accepted that.” 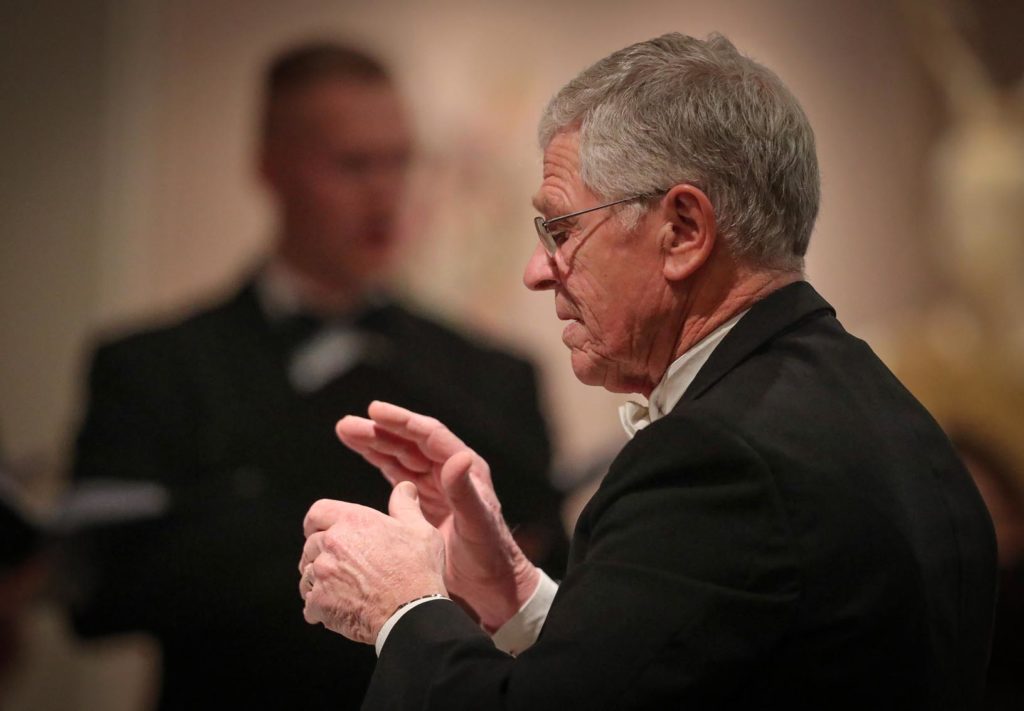 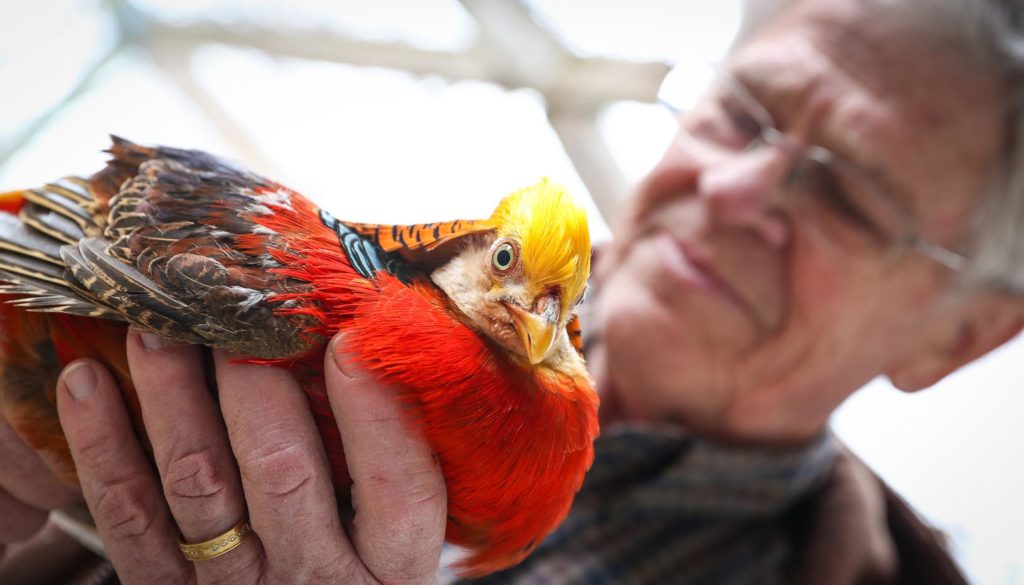