KEARNEY – Sheryl Feinstein started her professional career four decades ago with one goal in mind.

She wanted to make a difference.

That’s why she became an educator and eventually what led her to the University of Nebraska at Kearney, where she’s been dean of the college of education since May 2015.

“A lot of educators would consider it a calling, and I look at it like that, also,” said Feinstein, who is retiring July 5 after dedicating her working life to the profession.

The Des Moines, Iowa, native began her career as an elementary teacher before advancing to the collegiate level. Feinstein was chair of the education department, director of the online Master of Arts in Education program and a professor at Augustana University in Sioux Falls, South Dakota, when she made the move to Kearney four years ago.

UNK’s strong reputation in the teacher education field played a big part in that decision.

“People have always looked to UNK as a place to prepare educators,” Feinstein said. “I saw they were really making a difference here and I wanted to be a part of that.”

As dean of the college of education – which also houses the communication disorders, counseling and school psychology, kinesiology and sport sciences and educational administration departments – Feinstein played an integral role in several advancements that continue this tradition.

In December, UNK announced the creation of a new Teachers Scholar Academy that provides full-tuition scholarships and academic support for future educators. Also offered at University of Nebraska campuses in Lincoln and Omaha, the scholarship program aims to increase the number of qualified teachers available for school districts across the state. It’s funded by the William and Ruth Scott Family Foundation.

“Sheryl brought considerable enthusiasm and energy to her position as dean. This shines through in her work with all five departments in the college of education along with the University of Nebraska systemwide Buffett Early Childhood Institute,” said Charlie Bicak, senior vice chancellor for academic and student affairs at UNK.

She was also central to the planning and private funding for the LaVonne Kopecky Plambeck Early Childhood Education Center scheduled to open this fall on UNK’s University Village development. The $7.8 million, 19,900-square-foot facility, which replaces the Child Development Center in the Otto C. Olsen building, will train undergraduate and graduate students, support academic research and serve Kearney-area families by providing early education for up to 176 children.

Feinstein believes the investment in Nebraska’s youngest residents will benefit the region for years to come.

“The people of Nebraska have said over and over that they support early childhood education,” she said. “I think UNK has made significant steps toward that.”

She was a Fulbright Scholar in Moldova in 2014-15, teaching graduate classes and workshops at the Institute of Educational Sciences and studying ways online education could help small villages that struggle to recruit teachers. During her six-month stay, Feinstein and another teacher wrote a children’s book addressing gender issues and discrimination.

In Tanzania, where she was a Fulbright Scholar from 2007-08, Feinstein taught undergraduate students at Tumaini University and researched the prevalence of HIV in adolescents and how to better educate the local population about the virus. She also studied the Maasai tribe and partnered with colleagues on a book highlighting women with disabilities and terminal diseases, as well as the local culture.

“It was an absolutely wonderful experience,” Feinstein said of the yearlong program.

Feinstein, who has four children and five grandchildren, wants her future travels to include more time with family.

“This just seemed like the right time,” she said of her upcoming retirement.

Her children live in Washington, D.C., Ames, Iowa, Irvine, California, and Austin, Texas, where she’s moving this summer. Feinstein plans to take advantage of the warmer weather through her hobbies, including tennis, golf and other outdoor activities, and she wants to get involved with an after-school reading program for elementary students.

The 65-year-old knows she’s leaving the college of education in good hands.

“The strengths of this college, without a doubt, are the students and faculty,” Feinstein said. “I’m continually impressed with their commitment and dedication.”

The same can be said about their dean.

“Sheryl’s integrity, personable nature and true commitment to the college of education and the entire UNK community have made us a better place,” Bicak said. 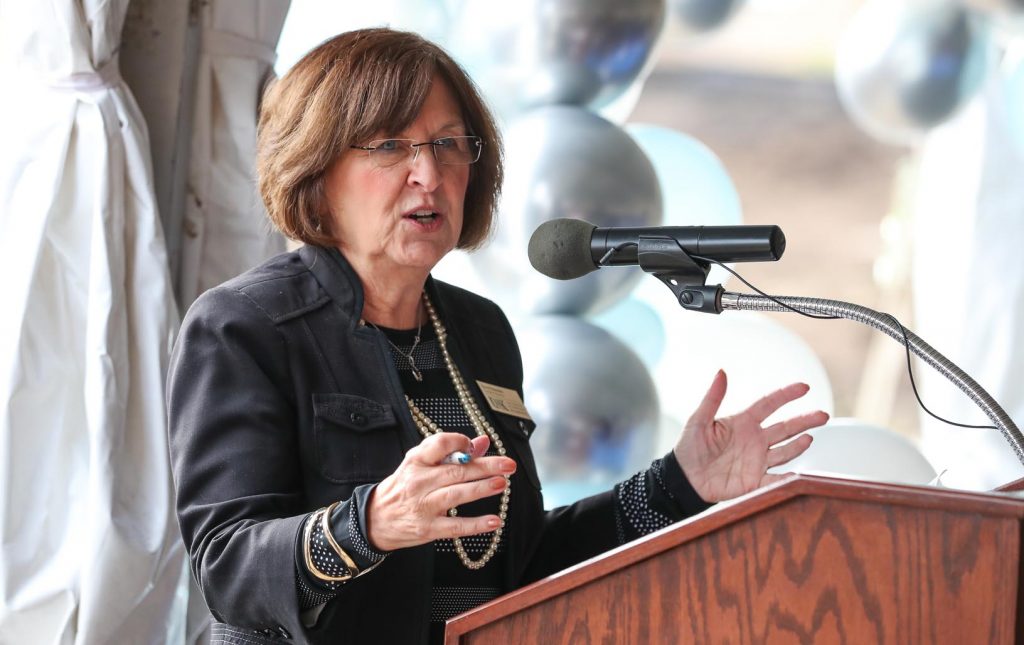