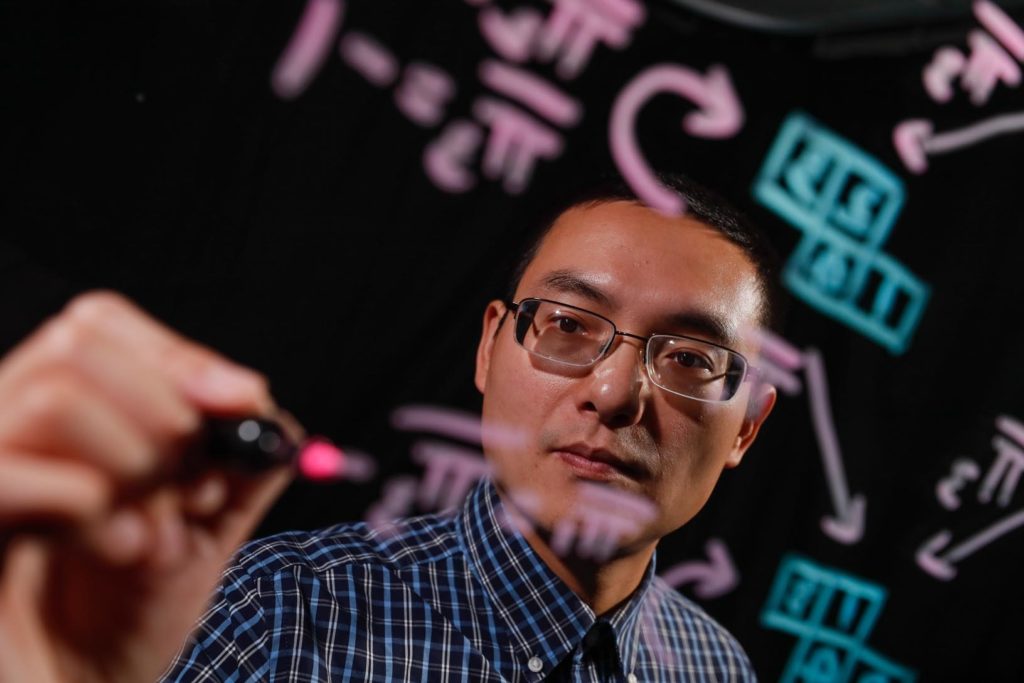 The University of Nebraska at Kearney associate professor enjoys the process of analyzing a problem, then developing ways to attack it.

“And if I’m lucky enough, I have the answer in the end,” he said.

That’s another draw. In math, there’s usually a definite answer. You’re either right or wrong.

“Even without any application, sometimes the result itself already looks very beautiful,” Huang said. “That’s something important for mathematics.”

Huang’s fascination with the subject started at a young age while growing up in Jiujiang, a city in eastern China located along the Yangtze River.

“In grade school, I was pretty good at math,” he said. “It’s interesting to me and I can solve a lot of interesting problems.”

Huang earned a bachelor’s degree in math from the University of Science and Technology of China before pursuing a doctorate at the University of Minnesota. He didn’t know much about the Twin Cities at that time, but the university’s strong reputation in discrete mathematics research was enough to bring him to the Midwest.

“It turned out to be a pretty good decision. Everything worked out pretty well for me and my family,” said Huang, who married his wife Ting Zou shortly before the move to the U.S. 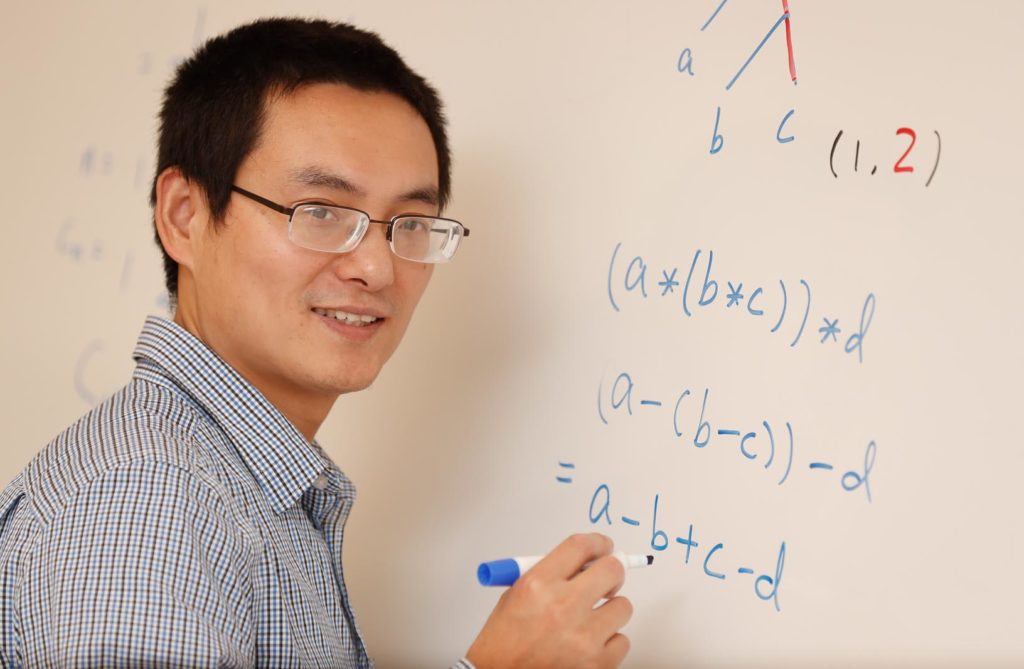 Huang’s doctorate research focused on discrete mathematics, which deals with objects that have distinct, separated values – think individual points instead of continuous lines.

For example, if there are 10 teams in a sports league and every team plays each other twice, how many total games does the season include? That’s a problem answered by discrete mathematics.

Huang likes discrete mathematics because it often has “an experimental flavor.” Researchers can look for patterns, develop a theory, then prove or disprove that theory using math.

A famous problem in discrete math is the four-color theorem, which states that only four colors are needed to color any planar map while ensuring that no adjacent, contiguous regions share the same color. That theorem took decades to prove and there are still some doubters.

At UNK, Huang’s research looks at the connections between discrete mathematics and algebra, including algebraic and enumerative combinatorics, combinatorial representation theory and graph theory.

“Algebra is a branch of mathematics with a very long history and having great significance in contemporary science, technology and engineering. On the other hand, discrete mathematics is relatively young and recently flourishing, with many applications in STEM fields, as well,” he said. “The connections between these two areas are often interesting and also useful. For instance, molecular symmetry in chemistry benefits from group theory, enumerative combinatorics and graph theory, as well as their connections with each other.”

One project that also included UNK students studied binary operations, which are widely used in science, technology, engineering and math. An example of this work is calculating the number of possible results when five different numbers are subtracted consecutively, but the subtractions can start anywhere and move in either direction.

Another area of research is domination, for example, determining the fewest number of servers needed to sufficiently cover a communication network and how that number changes if a connection is broken.

“This field has a lot of possible applications in the real world,” Huang said of discrete mathematics. “It has connections to many interesting real-life problems.” 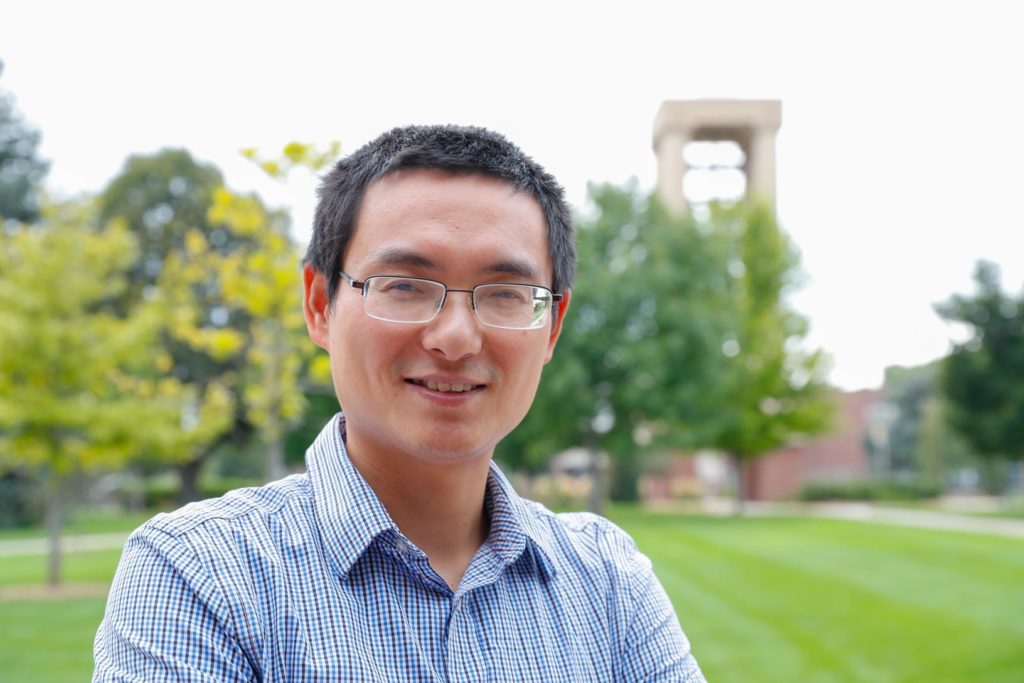 That’s a message he repeats over and over to his students. Huang uses these real-world connections to motivate students and encourage them to take on their own research projects.

“At UNK, we are focused on students. We are student-centered,” he said. “I think research should be an important component of that.”

Undergraduate research, he added, enhances the learning experience by allowing students to apply their knowledge from math courses in a new way while discovering new things.

“It is important to not only teach them mathematical knowledge and skills, but also help them develop their own mathematical thinking and encourage them to apply mathematics in other fields,” Huang said. “One good way to achieve this goal is to engage them in research and provide them opportunities to independently solve problems by themselves, and this will further consolidate their understanding of multiple subjects in mathematics.”

In his classroom, Huang welcomes questions and collaboration among students. That’s a major benefit of being at UNK, where he’s worked since 2014.

“The class sizes are pretty small. That’s something really nice to me because I can interact with my students and understand their needs,” he said.

It’s a stark contrast to his time as a postdoctoral associate at the University of Minnesota, when he taught a class with about 200 students in the room.

“Most of the time I only looked at the people in the first couple of rows,” Huang said. “I don’t know how much those students got from my lecture.”

During his job interview at UNK, Huang was asked to teach a class with about 10 students who asked questions and interacted with the professor candidate. That was a selling point, along with Kearney’s size and the easy commute compared to the one-hour bus rides he endured in Minneapolis.

“I think we have a very nice work environment. It just feels very comfortable,” said Huang, noting the friendliness of faculty and students and his department’s willingness to work together.

He expects to see even more teamwork when UNK’s new STEM building opens in fall 2019. The 90,000-square-foot building, part of the Otto C. Olsen replacement project, will bring the university’s science, technology, engineering and math programs together inside a state-of-the-art facility that promotes collaboration and innovation among students and faculty.

“That will be a good platform for us to find new collaboration opportunities,” said Huang, who is looking forward to sharing ideas with faculty from other departments and further exploring the connections between science, technology, engineering and math.

“I also think that will be beneficial for our students,” he said. 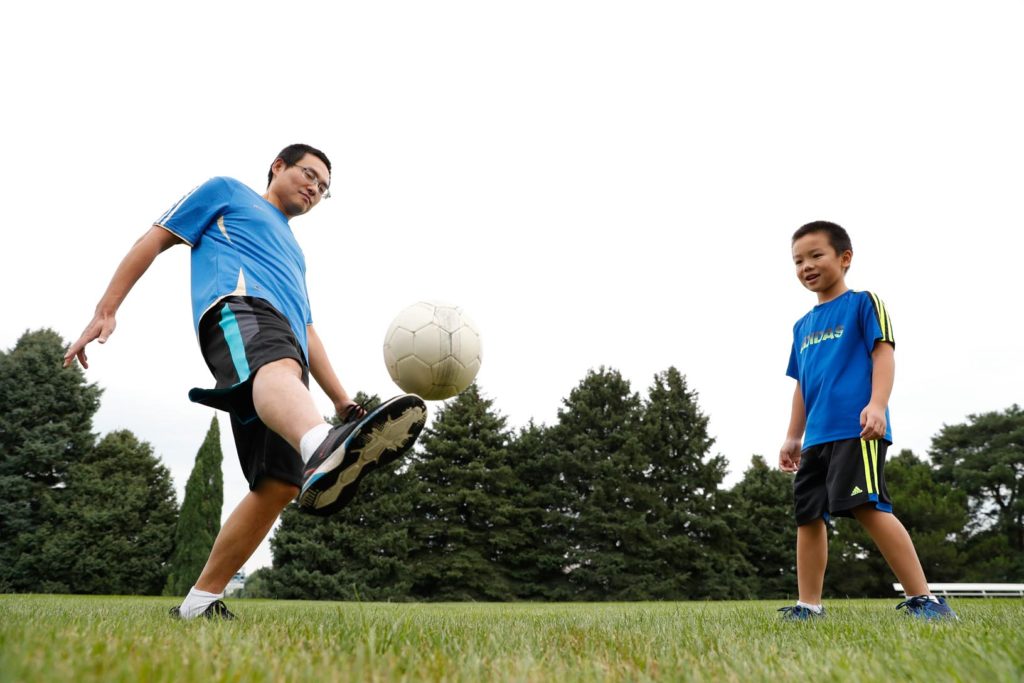 Outside the classroom, Huang enjoys reading, particularly science fiction and history books, as well as soccer, although there’s a lot more time for the former with two sons, ages 6 and 2.

Huang did play intramural soccer at the University of Minnesota and pick-up games for a couple years at Ted Baldwin Park in Kearney before his schedule got too hectic. He likes the teamwork and strategy the sport requires.

“It’s a good job for her,” he said. “She likes teaching kids and building those relationships.”

With two educators in the household, teaching is a common topic of conversation. But does she like talking discrete mathematics as much as he does?

“That’s a different story,” Huang said with a smile. “I don’t think it’s her favorite subject.” 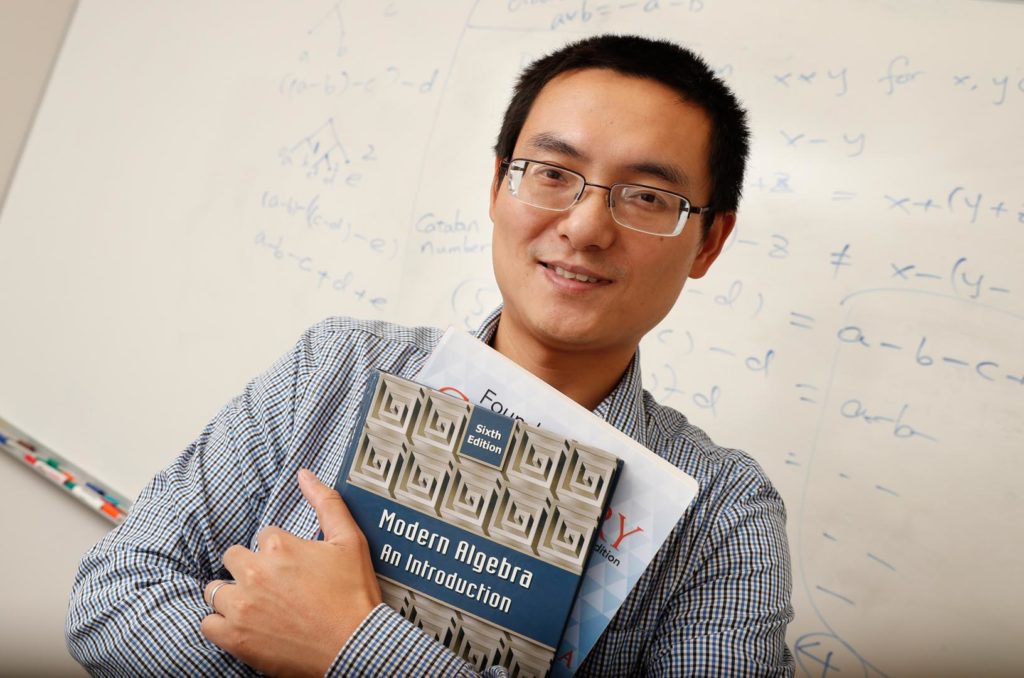