KEARNEY – Terry Gibbs remembers the moment like it was yesterday.

He was sitting in a room with his parents and cousin, a recruiter for the U.S. Air Force. Gibbs had a pen in his hand and the enlistment papers in front of him when he paused to think.

“It was one of those proverbial fork-in-the-road moments,” Gibbs said.

He decided not to enlist, starting a winding journey that eventually brought him to the University of Nebraska at Kearney’s aviation program. 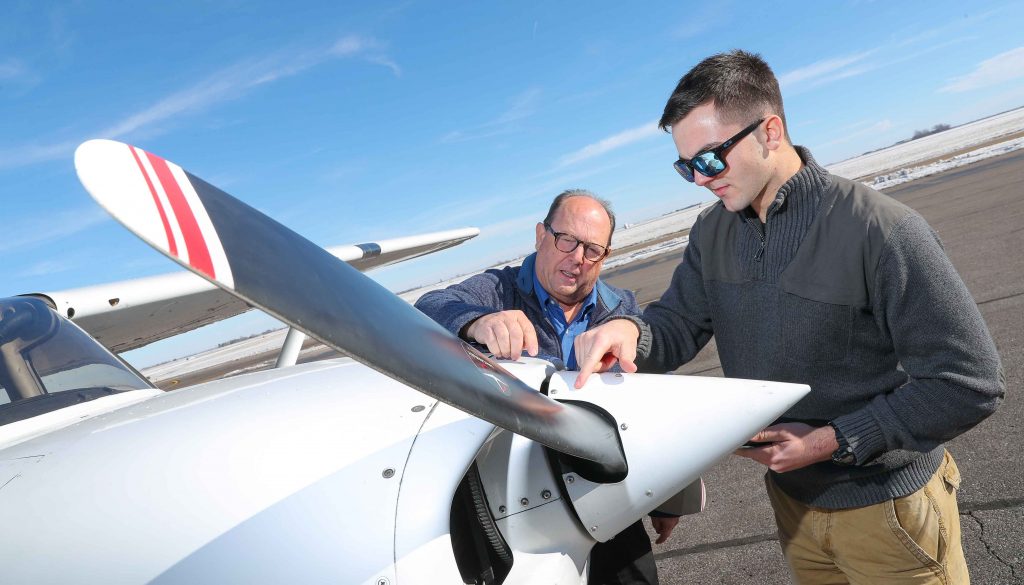 Gibbs, who grew up on a farm near Orchard in northeast Nebraska, didn’t have much of a plan after high school. He struggled with mathematics and had to complete summer school just to get into college.

After a year of community college prep, he enrolled in the electrical engineering program at the University of Nebraska-Lincoln.

“I really had no idea what they did, but it sounded cool,” he said of the major, which ended up being a good fit for someone who enjoyed tinkering with electronics as a child.

When Gibbs graduated from UNL in 1979, he had job offers across the country and accepted a position with Motorola’s Government Electronics Group, a defense contractor in Scottsdale, Arizona. Gibbs worked on research and development for naval weapons, primarily guidance and fuze systems for cruise missiles.

The job was great, Gibbs said, but he often thought about life back on the farm, where he loved watching the aerial applicators spray crops.

He decided to earn a pilot’s license and became a certified flight instructor in 1984, the same year he received his master’s degree in electrical engineering from Arizona State University.

“I learned to fly just because I could,” Gibbs said. “It was for fun.”

Gibbs and a co-worker started their own business, Deer Valley Aviation, and provided flight instruction when they weren’t on the clock at Motorola. As the business grew from three planes to 13, Gibbs left his electrical engineering job to focus on the venture full time.

“Most people thought I was absolutely crazy, because the engineering life is a good life,” said Gibbs, who also holds aircraft mechanic and airline transport pilot certifications.

At its height, Deer Valley Aviation had a fleet of 72 aircraft and roughly 130 employees. The business offered training for commercial airlines and conducted charter flights across North America and Central America – Gibbs flew country music legend Glen Campbell to his shows for about three years.

Gibbs changed courses again in 1992, when he and his wife adopted a son and moved back to Nebraska to be closer to family. Their daughter arrived three years later.

He joined UNK in August 1992 as coordinator of the aviation program and was named director in August 2001. Gibbs also spent 16 years as a pilot and director of training and operations for Midway Aviation, based at Kearney Regional Airport.

“There was nothing straight about this career path,” said Gibbs, who became a designated pilot examiner in 1993.

After nearly four decades of flying, the 61-year-old uses his own “crazy” decisions as a lesson for students.

“When you have the opportunity to learn something, do it,” he said. “Even if you don’t have a need for it today, it creates an opportunity for tomorrow.”

A recent four-day work trip took Jason Hughes to nine different cities, with overnights in Oklahoma City, Boise, Idaho, and Boston.
He made stops in Houston, Denver, Tucson, Arizona, Las Vegas, San Diego and St. Louis along the way.
“Every day it’s something new,” said Hughes, who flies a Boeing 737 across the United States for Southwest Airlines.
That’s what the Burwell native and 2002 graduate of the University of Nebraska at Kearney loves about his career as a commercial pilot.
“It’s really cool to get out and see the country – and get paid to do it,” he said.
The 38-year-old Lincoln resident joined Southwest about three months ago after working as a corporate pilot and with Minneapolis-based Compass Airlines. He calls his current employer a “destination carrier” – the job you want to keep until retirement.
UNK helped him get there.