KEARNEY – As the north wind howled and the temperature plunged, it became clear this would be a long, uncomfortable night.

The small group gathered near the Bell Tower on the University of Nebraska at Kearney campus scrambled to set up its shelters before the conditions worsened. They used nearby Copeland Hall to block the strong wind gusts and stuffed cardboard boxes with blankets and sleeping bags to insulate themselves from the chilly air.

Mother Nature’s quick transition from fall to winter ensured this would be a powerful experience.

UNK students and faculty were joined by community members Friday evening for “A Night Without a Home,” a project organized by Chi Sigma Iota to shine a light on homelessness by challenging people to spend just one night in the elements.

“Homelessness is everywhere. If you think you only see it or it only happens in larger cities, you’re mistaken. It does happen here in central Nebraska,” said Doug Tillman, an associate professor in UNK’s Department of Counseling and School Psychology and faculty adviser for Chi Sigma Iota, an honor society for counseling students.

The advocacy project aims to raise awareness of the issue and let people know how they can help those in need.

Although homelessness wasn’t a common concern for people in his hometown of Curtis, Sandman said the time he spent in Chicago after earning a bachelor’s degree at UNK “really opened my eyes.”

“I saw a lot of homelessness there and it really affected me,” he said.

Now a second-year graduate student at UNK working on a master’s degree in clinical mental health counseling, Sandman wanted to resurrect “A Night Without a Home” to get more people thinking about the issue.

“It’s a problem that does exist here in Nebraska and rural communities, but I think it’s one that goes unseen for the most part,” he said.

There are also misconceptions that all homeless people are criminals or drug addicts, he said.

“That’s not always the case,” Sandman said. “There are a number of reasons for homelessness,” including health issues and domestic violence.

Hardage said that image may not be as visible in Kearney, but there are people living in their vehicles or constantly looking for a couch to crash on.

Chi Sigma Iota, which hosted “A Night Without a Home” for the first time in 2013, will present the project in late March during the American Counseling Association’s annual conference and expo in New Orleans.

Tillman hopes the experience resonates with people from all areas.

“Although it’s a night for these folks, it’s every day for a lot of other people,” he said. 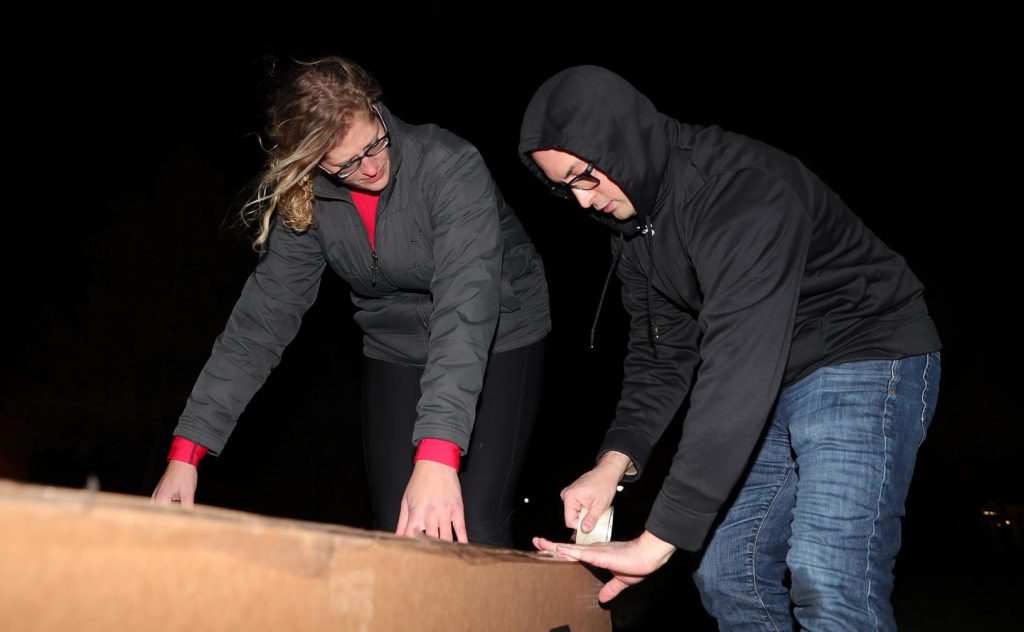 The Social Justice League, Office of Multicultural Affairs and Leadership UNK hosted events for national Hunger and Homelessness Awareness Week, including a collection drive for the Big Blue Cupboard, an on-campus food pantry.

“Right here in Kearney there is a need to help people who are struggling,” said Monica Mueller, assistant director of UNK’s Office of Multicultural Affairs and a food pantry coordinator.

The Big Blue Cupboard, located in the Office of Multicultural Affairs on the first floor of the Nebraskan Student Union, was created in 2012 to assist people facing food insecurity. University of Nebraska at Kearney students and employees can access the food pantry during regular union hours using their university IDs, and community members can schedule an appointment by contacting Mueller at 308-865-8127 or muellermr@unk.edu.

Mueller said the number of people who utilize the Big Blue Cupboard demonstrates the need for this service.

In October, 156 people received a total of 604 items from the food pantry, up from 96 people and 366 items during the same month a year ago.

“This has been our busiest year to date,” Mueller said.

The Big Blue Cupboard is supported by funding from the University of Nebraska Foundation and donations from the Kearney Jubilee Center, Campus Lutheran and American Association of University Women. Donations also come from UNK students and employees, as well as community groups, and discounted items are available through Food Bank for the Heartland.

“I like to say it’s for campus, by campus, because almost everything we get comes from campus,” Mueller said.