You are here: Home / Athletics / After stellar volleyball career at UNK, Lindsey Smith will take her game to the beach
Post Views: 2,663

The University of Nebraska at Kearney setter had no idea she’s about to pass Jenni Mau (1987-90) for the fifth-most assists in program history or that her 11.3 assists per set are already No. 5 on the school’s all-time list.

Those achievements are cool, the 5-foot-8 senior said, but personal accolades have never been her focus.

“I just wanted to come in and have the college athletics experience, just have fun,” she said.

Smith talks about her UNK volleyball career like a true leader. She’ll mention ups and downs and her growth as a player and person, and she always credits teammates for her successes. You can’t be a great setter without talented passers and skilled hitters around you, Smith notes.

Humility aside, it’s hard to ignore her impact on the court.

The Dakota Dunes, South Dakota, native is already a two-time All-Mid-America Intercollegiate Athletics Association (MIAA) first-team selection, and she’s on track for a three-peat with a conference-leading 950 assists this season. As a sophomore, Smith was named an American Volleyball Coaches Association (AVCA) honorable mention All-American and All-Central Region performer.

“That kind of came as a surprise to me,” she said of the sophomore honors. “Our team success really helped achieve those awards.”

Team success is certainly part of the equation – the Lopers, ranked No. 2 in Division II, are 25-1 this season and 122-14 over the past four years – but there are plenty of other attributes that make Smith stand out.

“Nobody cares more about the game of volleyball, playing it right, playing it in a team-minded sort of way, than Lindsey Smith,” said UNK head coach Rick Squiers. “She holds herself to the highest possible standard at all times – every practice, every game, academically. Almost to a fault, she just has the most ridiculously high standards for herself.”

Squiers described his star setter as a “warrior,” someone who is always giving 100 percent and never misses a practice or match.

“I think those things get overlooked, because people just come to the game and they see Lindsey Smith play,” he said. “She really puts the time in.”

Smith played in 23 of UNK’s 36 matches as a freshman, including 20 starts, and never looked back. She’s started every match over the past three seasons except one, a three-set victory over Johnson & Wales University last year when Katy Ernest got the nod on senior night.

“We’ll feel her absence when she’s done,” Squiers said of Smith. “That’s all there is to it.”

Smith, who set the record for career assists at Dakota Valley High School, won a state title in 2013 and was named an Under Armour/AVCA High School All-American, came to UNK because she wanted to win. She also understands the program’s past, which includes 19 straight trips to the NCAA tournament, raises the bar for current players.

“As our success continues, there are definitely expectations,” Smith said. “That does make it a little bit more difficult to maintain that level of play.”

But she and her teammates aren’t backing down from the challenge. Smith knows UNK hasn’t made it past the first round of the national tournament since 2012, and the Central Region is always loaded with tough opponents.

That’s why the Lopers are always watching film and looking for ways to improve.

“I think that’s definitely what’s kept us at such a high level,” Smith said. “Our coaches really rally behind us and really push us to be even better. Even if we’re having a winning season, we can always improve.”

This year’s team is experienced, with four seniors and six juniors on the roster, and strong on the defensive side of the net. Offensively, Smith said, UNK gets contributions from every position, which makes life difficult for opponents.

“That makes us hard to scout, because other teams can’t really key in on one player,” Smith said. “They have to deal with all of us.”

UNK also benefits from one of the biggest home-court advantages in the country. The Lopers have won 65 straight home matches, with their last defeat coming in November 2014.

“The Health and Sports Center, there’s something kind of magical about it,” said Smith, who has never lost there. “The fans are so much closer and it just makes it that much more intense. I think that atmosphere definitely provides an advantage for us.”

The Lopers can break the school record of 66 straight home victories, set in 2005, with wins Friday against Emporia State University and Saturday against 11th-ranked Washburn University, the only team to beat UNK this season.

Squiers has enjoyed watching Smith evolve as a volleyball player over the past four years.

She leads the team with 33 service aces this season and can do just about anything on the court.

The 21-year-old’s all-around game and athleticism will serve her well next semester, when she heads to the University of Southern Mississippi to play beach volleyball.

“She has a lot of the attributes that help you in that two-person game,” Squiers said.

Smith got her first taste of beach volleyball in summer 2017, when she and UNK teammates Mackenzie Puckett and Tara Ziegelbein played for the USA Division II teams in Brazil.

“I wasn’t really looking to play beach volleyball, because we don’t have a lot of opportunities here in the Midwest, and I don’t have much experience with it,” said Smith, who was recruited to Southern Miss by the same coaching staff she worked with in Brazil.

“I definitely have a lot to learn,” Smith said, but she wasn’t going to turn down the opportunity to continue playing the sport she loves.

Smith will graduate in December with a bachelor’s degree in sports management and begin classes the following month at Southern Miss, where she’ll pursue a master’s degree in coaching.

She’ll be the first Loper to play Division I beach volleyball, which was added as an NCAA sport in 2011-12. Southern Miss will play its inaugural season in spring 2019 as part of the Coastal Collegiate Sports Association, and Smith will also be eligible for the 2020 season.

“I think she has a chance to be pretty good,” Squiers said. “It’ll be fun to watch.” 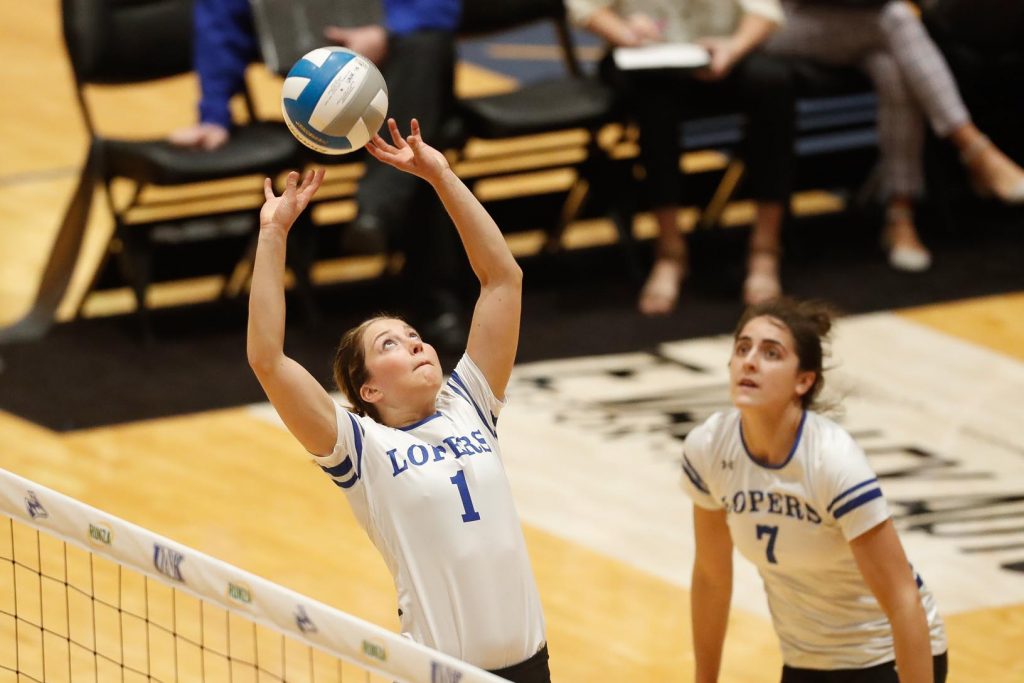 UPCOMING MATCHES
The second-ranked Lopers (25-1) will host a pair of MIAA opponents this weekend. Emporia State University (11-14) visits the Health and Sports Center at 7 p.m. Friday followed by a home contest against 11th-ranked Washburn University (23-1) at 6 p.m. Saturday.