More than 60 students help at popular haunted forest near Gibbon

GIBBON – Jarrett Havens waited motionless, his arms extended on each side, cloth covering his face.

He stood in silence, two wooden boards behind him and rows of corn extending above his head.

It was the perfect spot to ambush a family wandering down the dark path cut through an unharvested field.

“I’m ready to scare some people,” said Havens, a freshman at the University of Nebraska at Kearney.

That was only the beginning of the terrors Friday night for those brave enough to venture into Grandpa Grimm’s KneeKnocker Woods, a “Halloween experience” located along U.S. Highway 30 just west of Gibbon.

The half-mile-long trail snaking through agricultural cropland and a creek-lined grove is filled with spine-tingling creatures and startling surprises.

Havens and seven other members of UNK’s Phi Delta Theta and Sigma Tau Gamma fraternities were under strict orders to be “scary as hell” as they took on their undead roles.

“I’d rather be scaring people than be the one getting scared,” said Havens, who joined Phi Delta Theta so he could get involved on and off campus.

Playing the spooky scarecrow is “a fun opportunity to do community service,” he said.

Phi Delta Theta members have volunteered at the creepy attraction the past three years as a fall fundraiser. Instead of paying the students, KneeKnocker Woods makes a contribution to The LiveLikeLou Foundation, which raises awareness of amyotrophic lateral sclerosis (ALS), also known as Lou Gehrig’s disease, supports ALS patients and their families and funds research.

“I love Halloween,” he said. “I kind of wanted to be on the other side of it, just scaring people.”

Shortly before nightfall, the UNK freshman transformed into a chainsaw-wielding, psycho clown, a character he picked with purpose.

“I’m terrified of clowns,” said Gama, who thought playing the part would be less frightening. The plan backfired when Gama realized he wasn’t alone in the 13th Acre, a haunted corn maze with its own “surprising” theme and a 200-foot zip line.

KneeKnocker Woods was brought to life four years ago by the Kyle and Daniele Vohland family, who own the property that suddenly became overrun by blood-thirsty zombies.

They also operate Icon Poly, a 3D sculpture fabrication business that took a shocking turn when the family was contacted by Distortions Unlimited, one of the country’s largest producers of Halloween masks, props and animatronics.

The Greeley, Colorado-based company placed a custom prop order with Icon Poly, then brought a camera crew to Nebraska to film the manufacturing process for the Travel Channel show “Making Monsters.” Distortions Unlimited owner Ed Edmunds got a good look at the Vohland family property during the trip.

“He said this would be perfect for a haunted forest,” said Kylee Vohland, the daughter of Kyle and Daniele. “It just kind of developed after that.”

As the story goes, “Grandpa Grimm” was tilling his cornfield when he unknowingly unearthed an alarming number of dead bodies. This, of course, quickly led to a zombie infestation as the revived corpses started their own community and even infected the area wildlife. 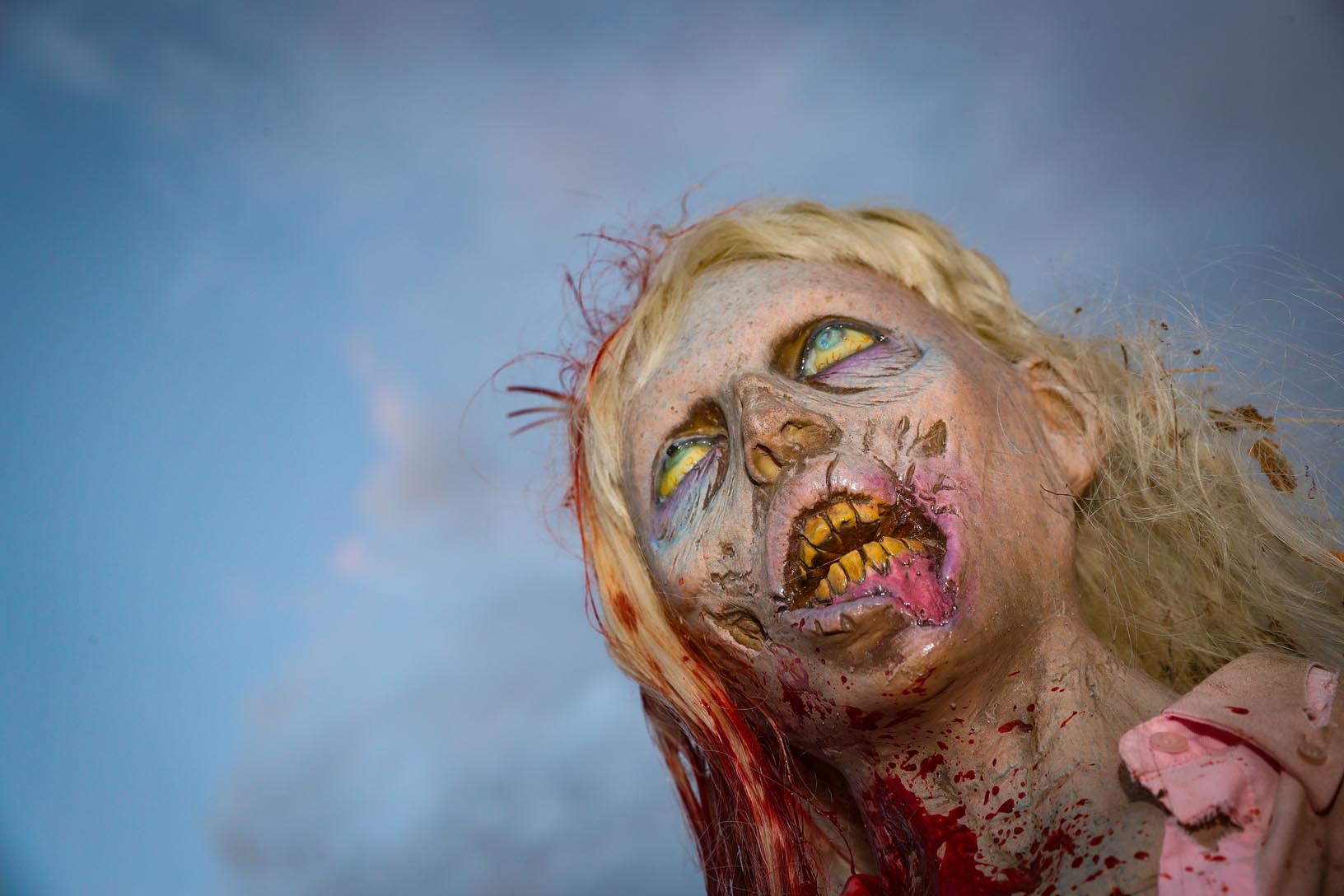 “The zombies completely took over,” said Kylee Vohland. “Nothing they’ve tried to do to stop them worked. They’re just taking over. It’s all zombies.”

The KneeKnocker Woods theme – currently “Undead Reckoning” – changes each year along with the trail path and design and many of the animatronic props, which are created by either Icon Poly or Distortions Unlimited.

“Even throughout the season, if you come one weekend, you might see something completely different if you come back two weeks later,” Kylee Vohland said.

Planning the terrifying experience is a year-round effort for the Vohland family, with their first trade show trip coming in November and setup starting a few weeks before opening night. It takes about 80 people, including actors and support staff, to keep things running smoothly throughout the season.

The roughly 60 members of the Phi Delta Theta and Sigma Tau Gamma fraternities are a big boost, according to Kylee Vohland.

“We really need them,” she said. “They’re great help.”

For one UNK volunteer, the experience serves two purposes.

Senior Odwuar Quiñonez, secretary of Phi Delta Theta, enjoys the charitable cause and the opportunity to practice for an acting career he hopes to pursue someday.

“I do have some experience as a zombie,” he said while sporting a tattered suit and mutilated mask.

“A lot of people might be scared, but I really enjoy this,” said Quiñonez, a third-year volunteer at KneeKnocker Woods.

Coulrophobia aside, Gama, the Sigma Tau Gamma member-turned-evil clown, was happy to spend his evening in the middle of a cornfield chasing frightened visitors.

“It’s a really good fundraiser,” he said. “It gets us out and interacting with the community.”

Whether the community enjoys this interaction is debatable.

TICKET INFORMATION
Grandpa Grimm’s KneeKnocker Woods, located on the north side of U.S. Highway 30 about 1 mile west of Gibbon, is open 7 p.m. to midnight Fridays and Saturdays through October. It’s also open 7-11 p.m. Sundays beginning Oct. 14.
Tickets can be purchased on location or online at www.kneeknockerwoods.com. Coupons for a $2 discount are available at Pump and Pantry convenience stores or from members of UNK’s Phi Delta Theta and Sigma Tau Gamma fraternities. 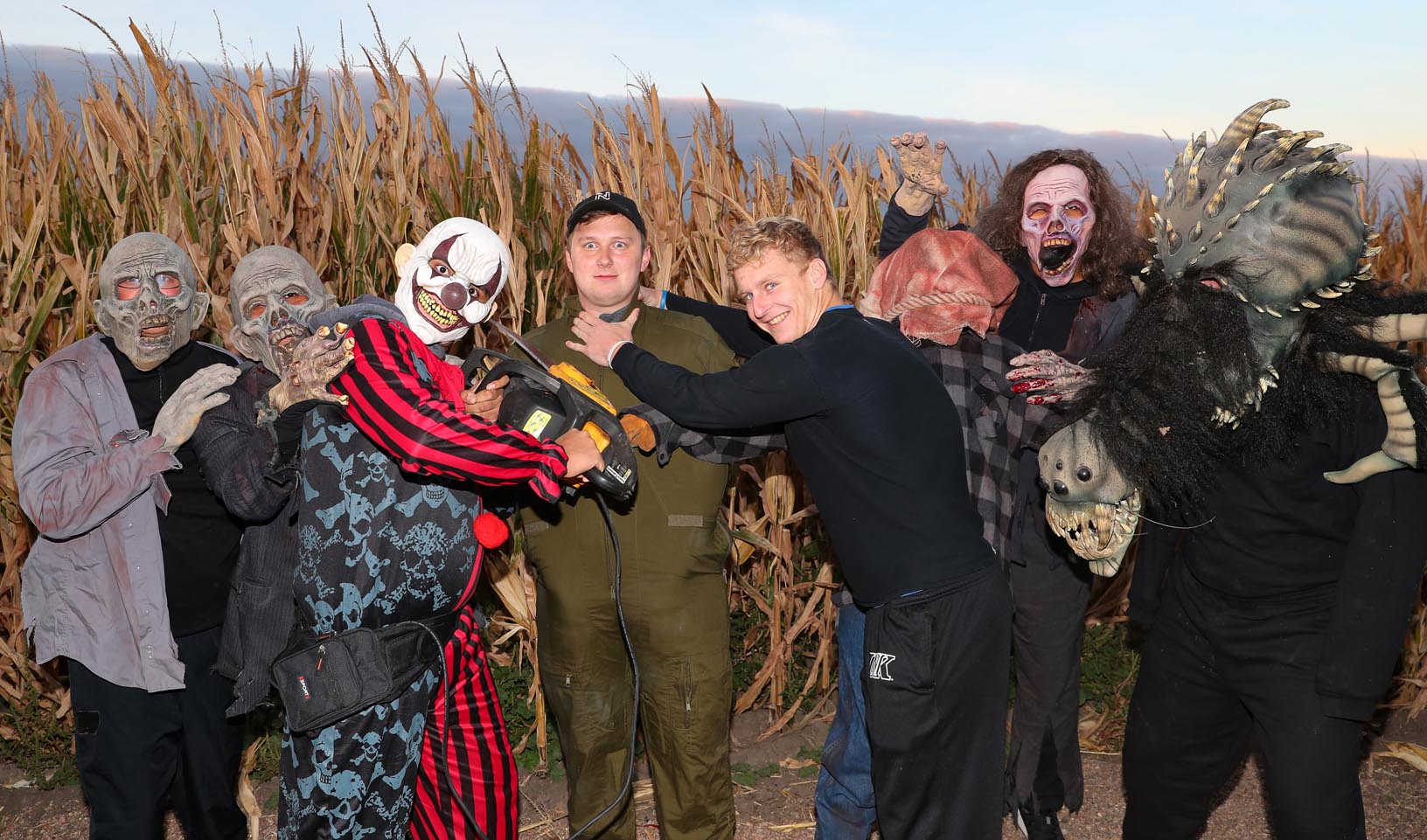 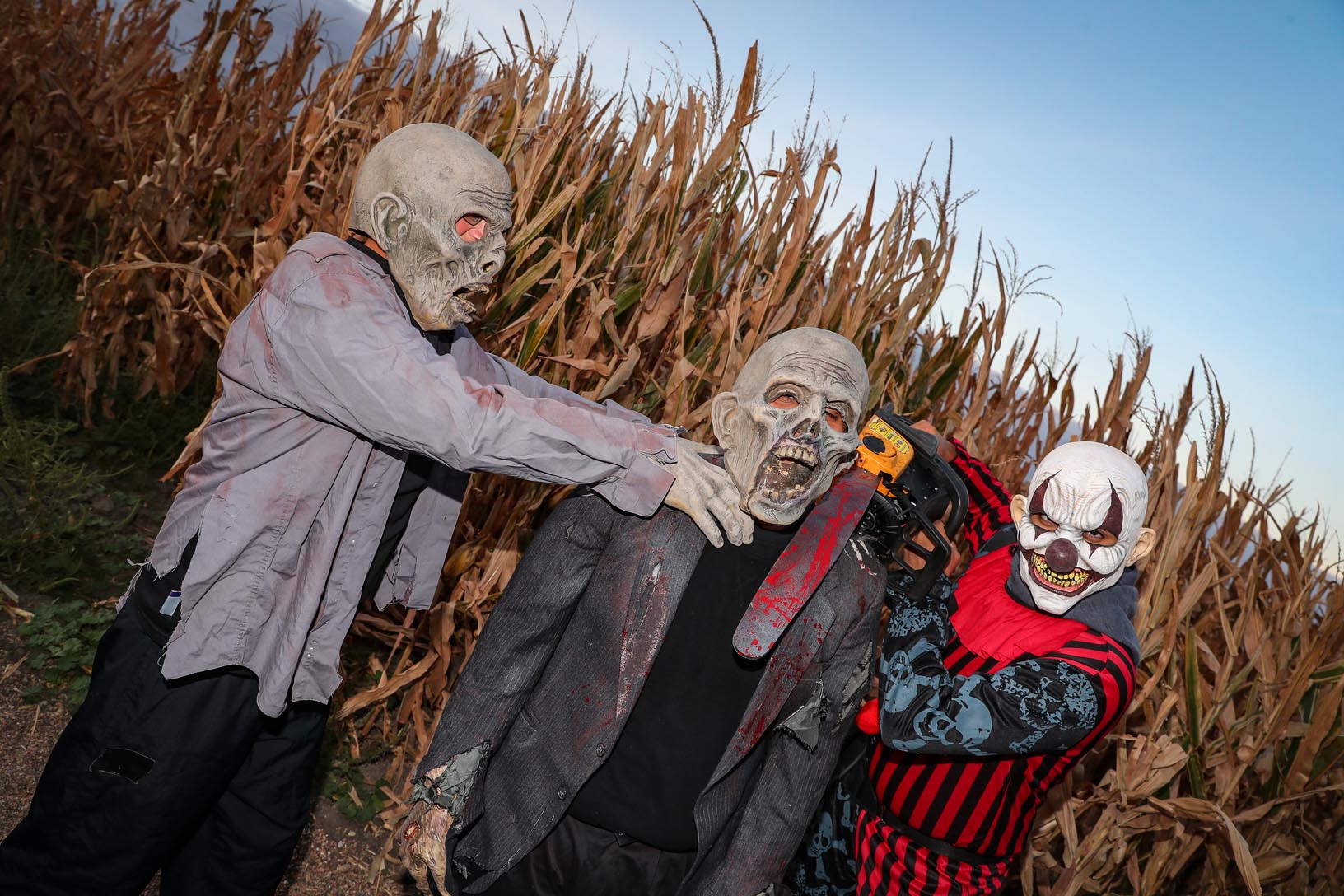 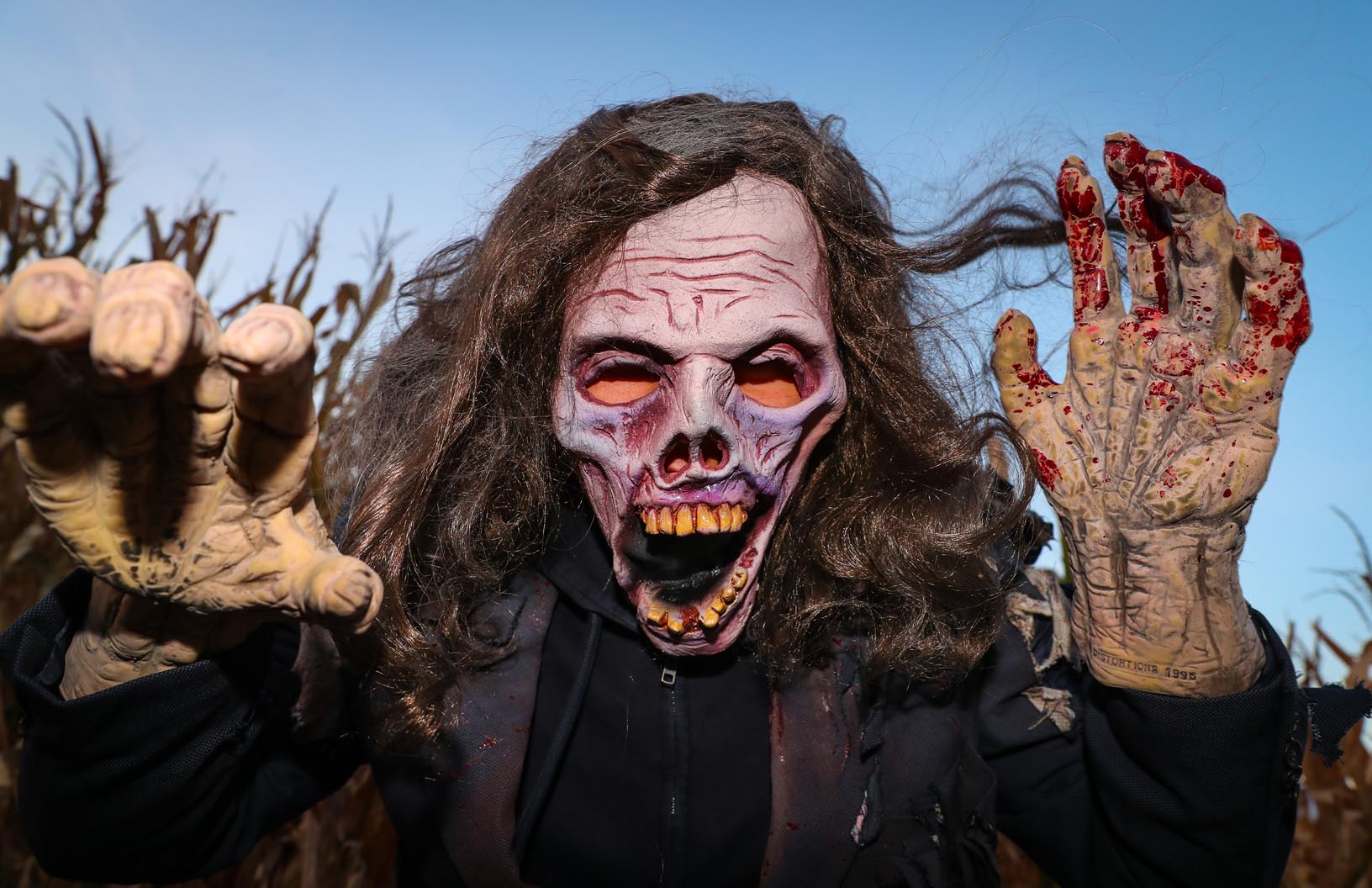 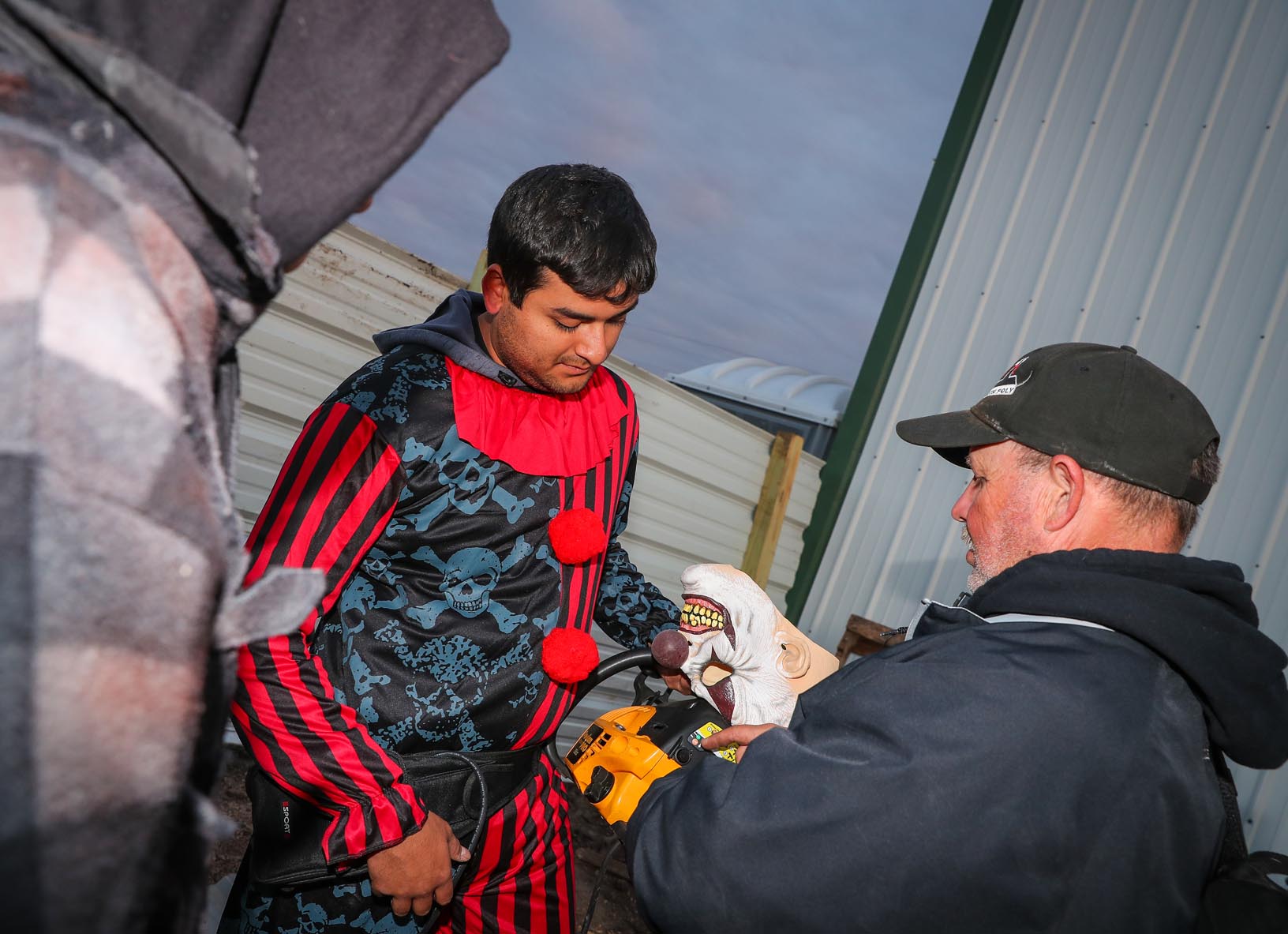 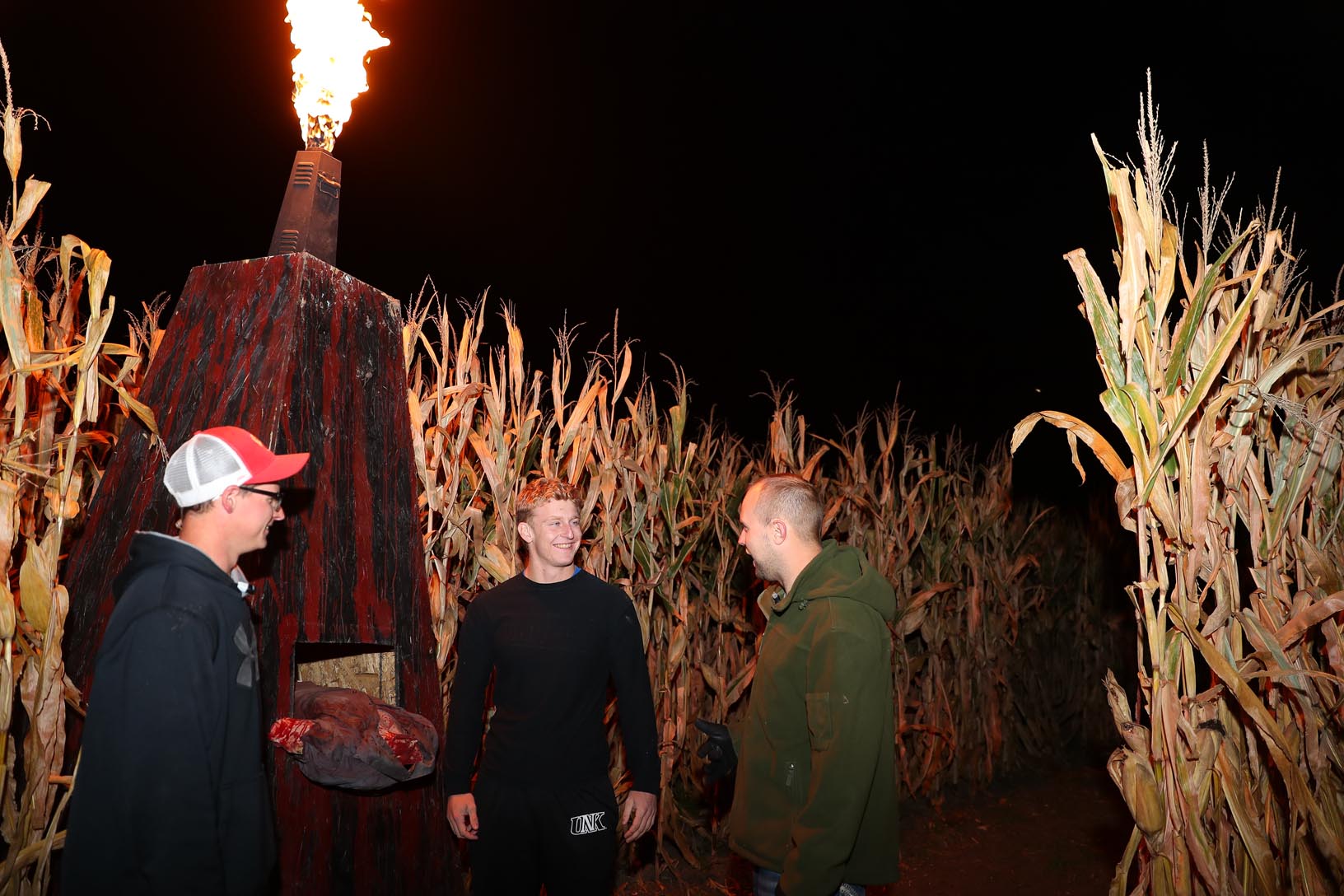 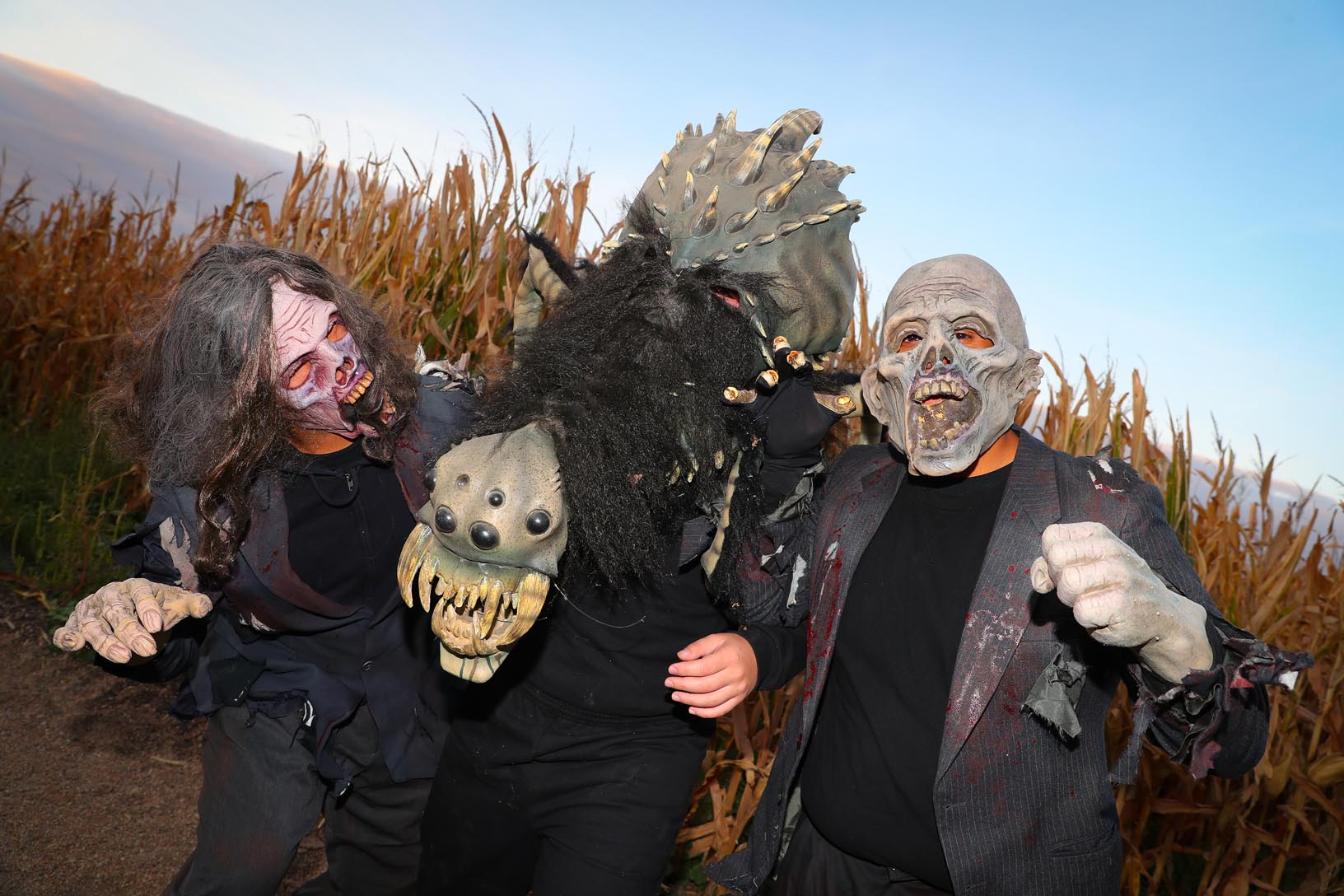 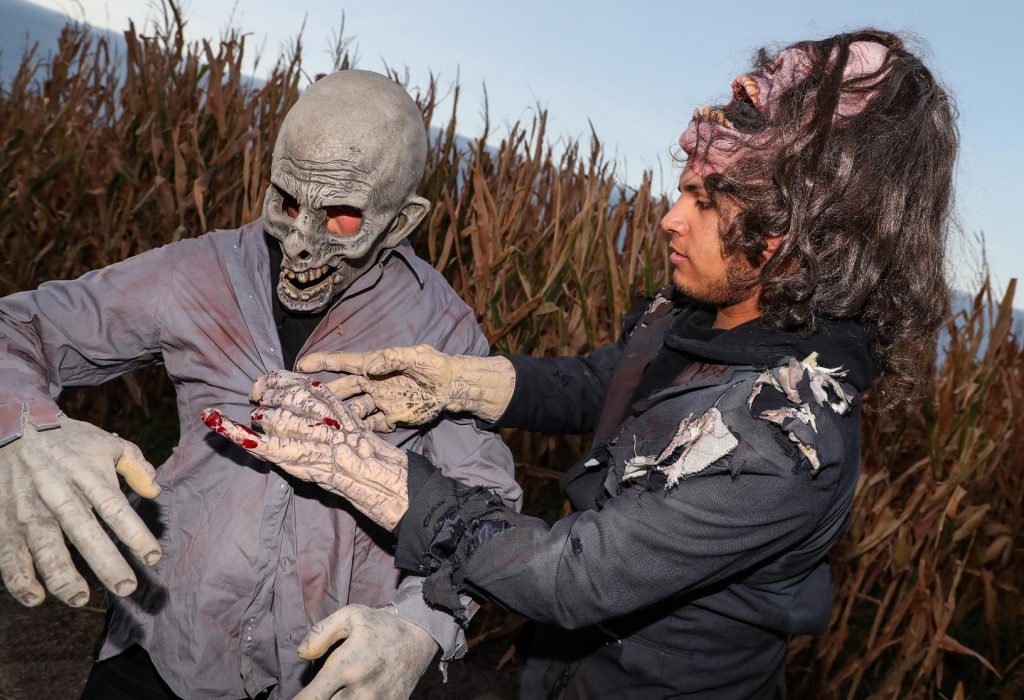